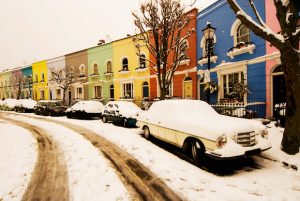 Wish You Were Somewhere Warm and Sunny? That Can Wait - Europe Is so Affordable This Winter, You're Almost Crazy If You Don't Go

Hear the one about the strong dollar? Okay, so it's been strong for a while now and we've had a lot on our plate here at home lately, so maybe you forgot already, or were never paying attention. You should, because who knows how long these favorable conditions will last – conditions so favorable, in fact, there are now officially some very good transatlantic trips you can do more affordably than a good many popular destinations here at home. Convinced and ready to go? Great. Read this first.

Let the Norwegians take you there

Lots of people think they're getting a great deal with Icelandair and WOW Air, and that's totally fine, we're not knocking it, sometimes the prices are really good. But you know who gets you from major gateways in North America to all over Europe without making you stop at an airport on a tiny little island in the middle of the night? Norwegian Air, that's who. With nonstop fares for as little as $245 each way from New York to London-Gatwick available as a matter of course (no, really, and sometimes very last minute) and eye-popping deals like $650 each way in their totally fine Premium class from Los Angeles to Paris (again, nonstop) on their clean, modern, 787 Dreamliners, anyone flying to Europe for fun any other way right now had better be doing so on points or have a really good excuse. Learn more at norwegianair.com.

Been to London and Paris? Great. Time to try something else. While you can bend over backwards trying to do either one affordably, why not choose from a long list of other energetic cities (Berlin, Madrid, Lisbon) or iconic, less centralized regions (Yorkshire, Burgundy, the Alto Adige) where your dollar will stretch even further.

Sure, it's pretty cool that you will often be able to stay in the city of your choice in a very decent hotel for less than $150 per night. You know what's really cool? Staying three nights for $150 somewhere simpler but also totally fine. Fact: Europe is one of the best otherwise pricey places in the world for people who don't like to overspend on hotels, with clean, reliable chains like ibis Budget, Premier Inn and Motel One offering everything you need at prices that are often a fraction of what a slightly larger room might cost back in the United States. Want something less slick? Fine – there are plenty of great B&Bs and, these days, short-term rentals through sites like Airbnb, Homeaway and Flipkey.

Access to the lowest available train fares is easier than ever

Remember the old days, when you had to buy a pass, or wait in line at a ticket office, or get to the station really early to collect a ticket? That's all gone, mostly. In the United Kingdom and in many countries on the continent, the incredibly useful Trainline app allows you to select the cheapest fares with a couple of clicks – they even accept Apple Pay. (They've also got an app for the continent, where you're good to go until you hit countries like the Netherlands, where purchasing a simple train ticket can try the patience of even the most seasoned traveler.)

Make sure your phone is up to speed

In the old days, your mobile might have simply stop working once you left your home country. Nowadays, your phone will do whatever you want it to do – for a fee, of course. An extortionate fee, sometimes, if you're not careful. If you're a T-Mobile customer, you'll be able to use your data and send text messages for free, with a nominal fee for calls. Verizon charges you $10 a day (you need to opt in) in European countries, a steep fee but fine for short trips – it allows you to use your phone just as you would at home. AT&T customers get hosed, paying a $40 charge per 30 days for a pathetic amount of data; calls are charged at a rather brutal $1 a minute. Oh, well – at least texting is free.