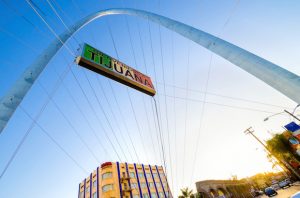 On any given weekend evening on Tijuana's Avenida Revolucion, the casual visitor would have no trouble finding exactly what they were expecting to find, here along the legendary main artery of this sprawling border city's historic center.

The ridiculously loud bars, the aggressive come-ons, the shamelessly manufactured party atmosphere – it's an in-your-face, fairly off-putting mix to most people over the age of 21, a scene that attracts fewer takers these days, following years of the drug wars, all of that post-9/11 paranoia and the subsequent wall-building and security-tightening that have scared many casual fun-seekers away from what is now the Western Hemisphere's busiest land border crossing.

With a sense of purpose, however, the visitor walking down the same traffic-choked thoroughfare – often referred to as La Revu – will see all sorts of signs of a new kind of Tijuana, one that's existed for years now but mostly in scattershot settings around town – a very cool kind of Tijuana, with its art galleries, design shops, food truck pods, slick espresso bars, microbreweries and restaurants serving up tasting menus of things that are local and responsibly sourced. The outside world may cling to dated notions of the city and its capabilities, but the new Tijuana doesn't so much care what the outside world thinks. In other words, things are starting to get really, really interesting.

Within blocks along this fabled stretch where you used to mostly come to get up to no good, you can now find a sleek art cinema, tasting rooms and bars where you can sample Baja's notable craft beers, a coffee roaster, a well-curated food hall, smart bistros, and, coming very soon, a terrifically cool, Ace-like address at which to hang your hat, an impressive re-imagination of the former Hotel Lafayette.

With plenty of Uber drivers waiting to pick you up once you cross over on foot (and to take you everywhere else in town, whenever) and the peso currently in near-freefall, there really are very few excuses left for not taking the plunge, whether you live in Southern California or are just dropping by. Oh, wait, you're going? Good. Here are just a few essential addresses on the Avenida Revolucion to know right now.

This budding brand began life as an Airbnb in San Diego's historic Barrio Logan (one of the few truly creative corners of the still rather by-the-numbers beach city). Now, its creators have hopped the border, breathing new life into a relatively unremarkable old flop and giving Tijuana what it sorely needs – a truly hip place to stay that's so close to the action, you can almost face-plant into it at the bottom of the hotel steps. The look is modern, spare, industrial but ultimately quite seductive – in keeping with the theme, there will even be a small branch of Object, one of the city's best contemporary design shops. Bookings should be open any day now, according to the hotel's creators, who are also working on opening up in Baja's wine country, the Valle de Guadalupe. (Avenida Revolucion 716, onebunk.com)

You could spend weeks on the taco / torta / ridiculous Baja seafood circuit, but these days, you can eat pretty much anything you're looking for, somewhere in Tijuana – good ramen, even. This cozy food hall hidden away from the hordes at the end of a long arcade serves up all sorts of food, from Japanese to Lebanese to a mean, cheeseburger at Indie Burgers. It feels like a secret, except that on weekends, you may find yourself waiting for a table. (Avenida Revolucion 1265, colectivo9.com)

Anybody who knows modern Mexico knows they've got the VIP cinema thing down in a way that seems to elude most operators in the United States. This gorgeous Mexico City import (there's one in Bogota, too!) brings a sense of "this place has arrived" to La Revu – it's an art house with a mix of the old and new, plus a bar and a very good restaurant, making this a solid one-stop for a civilized night out. (Avenida Revolucion 1317, facebook.com/cinetonalatj)

If you're just tuning in, Baja California's beer scene is huge. Don't act so surprised –

San Diego, that well-known craft brew powerhouse, is just over the wall. Just like north of the border, every time you turn around in northern Baja these days, it seems there's a new brewery to try. These two very interesting outfits have joined forces, offering tastings out of an appealing new storefront – complete with patio seating – right along the avenue. (Avenida Revolucion 1332, facebook.com/Teorema.Ludica)

Part of the Pasaje Rodriguez, a historic arcade that's now morphed into something of a cultural magnet, this spare little counter spot is one of the coolest places in town for a well-crafted cortado and a snack. Not that there's a shortage of coffee shops  around town – if, by chance, you aren't in sync with Aether's somewhat limited hours, the recently opened Container Coffee Roasters and the almost intimidatingly good looking downtown location of local standard bearer Das Cortez are within walking distance. As are, most likely, the five new coffee bars that opened in the time it took to write this sentence. Seriously, it's a lot. (Avenida Revolucion 931A, facebook.com/cafe.aether)

Not sure how to get to TJ? These days, you really don't need to drive there – and shouldn't bother, it's not worth the hassle. If you're in San Diego, just hop the city's efficient Trolley, which will bring you from downtown to the border for just $2.50 each way. Coming from LA? Take Amtrak's Pacific Surfliner service, offered every day and all day, from Los Angeles Union Station and points north – fares start under $40 each way. (Not much, when you consider that parking at the border often costs around $25 per day now). Details at amtrak.com and sdmts.com.

Want someone else to do the heavy lifting? Highly-regarded tours – both pre-scheduled and customized – are available through both Turista Libre and Club Tengo Hambre. Both are operated by fun, multilingual and bi-national crews.