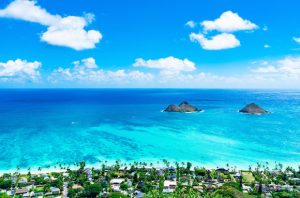 10 Reasons Why Hawaii Might Be Better Than the Caribbean

Whoever it was that first uttered the words "you get what you pay for" probably didn't spend much time in the Caribbean. During the winter months, visitors to the islands will be forgiven for feeling like unwitting victims of a giant scam. And where to begin, really – the ridiculously overpriced hotels and flights? Too little sunshine and too much wind? Overcrowded beaches (and that's just the touts?) Or what about poorly-planned airports, disaffected locals and—far too frequently—food that's not nearly good enough for what you're paying.

Seriously, people – do you need an intervention, or what? Do you need to be reminded that there are other alternatives? Hawaii is one. Have you tried Hawaii? For many of us, it feels far, sure. But it's not that far, and you probably don't have to transfer in San Juan to get there. Plus, upon arrival, everything's just, so, well, amazing, you won't even care. Looking to achieve a state of aloha this winter? Here are just a few very good reasons why you should be considering the Aloha State.

1. Because it is usually about 80 degrees, every afternoon, all winter long.

So, there's that. Get a cheap-ish hotel room over on the Big Island, somewhere not too far from Hapuna Beach, preferably, one of the prettiest stretches of sand in the state. Get up in the morning, turn on the television and listen to Al Roker moan about it being eight degrees in New York. Sip your lilikoi juice or your 100% Kona coffee – harvested and roasted just up the hill from where you are sitting, by the way – and feel like the luckiest gal or guy on the planet. It may be worth the flight, just for this.

Related: The 11 Best Adults-Only All-Inclusives on the Beach

2. You can go off the grid / take the affordable route / do your own thing without feeling anxious. Or going broke.

Look, the Caribbean can be a hassle. Anyone who wants can go off on their own, sure, but on many islands, logistics (and, sadly, sometimes security) are a very real issue, not to mention the cost. In Hawaii? It's Hawaii. Do your thing, man. Land at the airport, grab a car, drive out, stop at the Foodland / Whole Foods / Island Naturals or what have you, pick up groceries, go home. Home to your neat-o rustic treehouse on the Big Island, your Waikiki condo, your modest villa in Maui’s idyllic Upcountry – it's all possible, thanks to sites like Homeaway and Airbnb, both treasure troves of rather reasonably-priced lodging options throughout the state.

3. Because there are world-class beaches that will be sitting there mostly empty, nearly any day of the week.

From beautiful Bellows Field in up-and-coming Waimanalo (open weekends) to majestic Makaha Beach up on the Leeward Coast beyond the island’s least touristy towns, even overcrowded Oahu is blessed with a ton of beaches that most tourists don’t even appear to know how to access. You’ll be absolutely amazed at how much real estate (and parking) you’ll find on any given day at some of the world’s most magical stretches of oceanfront. Nobody selling trinkets, no all-inclusive hotels, no nothing – just white sand, green trees, blue sky and all of that beautiful water. The end.

Have you been introduced? If so, you already know – the seafood you can get in Hawaii for almost pennies is better than pretty much everything you’ve ever had outside of a high-priced sushi den. It is, generally speaking, worth the trip from anywhere. Start with silky, elegant poke – raw, marinated cubes of delicious ahi tuna – which can be found anywhere and everywhere, including the nearest supermarket. Then move on to the locally farmed shrimp, served scampi-style, served out of trucks all over the state. And who doesn’t love a place where mahi mahi is essentially the local trash fish? There’s so much else to try – grilled Monchong, pink ‘Opakapaka, delicate octopus, Kona crab – sample everything and anything you can get your hands on.

5. Because the local food scene is off the chain.

After years of resting on its rather tired Bev Gannon / Peter Merriman / Alan Wong laurels, a new generation of local cooks excited to do more than collect money from tourists are doing things more sustainably, more earnestly and much, much better. Hawaii has always been passionate about eating. Now, however, quality is the new quantity. This is trickling down everywhere, too – even to, say, burger joints in shopping centers sourcing beautiful, grass-fed beef from the ranch down the road. Of course, the classics are still the classics, from malasadas at Leonard’s in Honolulu to tasty noodles at Sam Sato’s on Maui and spam musubi and shave ice at, oh, pretty much any proper corner mart, anywhere. Best of all? Prices, on balance, will appear downright affordable to mainlanders visiting from any major city. Try finding that in the Caribbean.

6. Because you can see snow in the morning and lava at night.

Don’t like the weather? Most places, they tell you to wait a few minutes. Here, you just get in the car and drive. Tiny Hawaii brags four of the world’s five major climate zones – the Big Island alone contains a whopping 8 out of 13 total subzones. In English, this means that 100 percent desert and 100 percent rainforest can be found just a short drive away from one another. Along the way – what the heck, why not – detour up a nearly 14,000-foot peak (we’re now talking about the Big Island’s volcanic Mauna Kea) and hang out on the tundra for awhile, where snow is not unheard of. (Particularly not this year.) Fun, right? Darn right, it’s fun. Just make sure you don't put your rental car somewhere that gets you in trouble – if in doubt, ask when picking it up.

Barely tethered to the United States anymore – wait, was it ever? – this chaotic and colorful city is nothing like the rest of the country. At all. Lush gardens and parks and a never-ending string of awful, 1970s condo towers makes you feel like you’re in Singapore – a Singapore where everyone knows how to relax, anyway. An evening stroll down an increasingly glittery Kalakaua Avenue in Waikiki, with its Gucci and Prada and Apple and Louis Vuitton and crowds of Japanese visitors, calls to mind Tokyo’s glittering commercial corridors, while the neighborhood’s back street ramen parlors and legit katsu joints and 24 hour convenience stores seal the deal – this isn’t just some pathetic tourist zone – Waikiki is secretly Tokyo for Beginners, and anyone who likes cities is really going to dig it here. Put on your walking shoes, or rent a bike, and explore. (Don't forget to wear sunscreen.)

8. Because you can hike for days, through some of the hemisphere’s most inspired landscapes.

Oahu, not really, but the rest of the state? So much room. From a multi-day adventure on Kauai’s intense Na Pali coast (or the ridiculous, red and green of Waimea Canyon) to the tropical Pipiwai Trail in Maui’s Haleakala National Park and nighttime lava-viewing treks at Hawaii Volcanoes National Park on the Big Island, there’s really no reason to be bored. Don’t feel like going it alone? Each island has at least one excellent outfitter – on the Big Island, for example, definitely give Hawaii Forest & Trail a call – that’ll guide you through the process, meaning no anxious city person need be left behind.

10. Because island hopping is easy.

If you’ve ever been to some of the Caribbean’s better islands, you know the drill. “It’s easy to get here,” they’ll tell you. “Just fly into the airport on the [very unappealing] island next door, then take a [harrowing] taxi ride to the ferry landing, then wait for the [dodgy] ferry, then ride the old girl for an hour or so, then take another [dodgy] taxi, and then…” No. Stop. Hawaii may not the world’s most efficient place, but compared to many Caribbean islands, it’s freaking Austria. Here, competitively-priced, frequent air service on non-terrifying planes links all of the major islands, meaning that if it’s Tuesday, it could be, say, Kauai for a nice long day outing, no problem. Not that we advocate too much running around – that’s not how you do Hawaii – but for claustrophobes and anyone anxious about never being able to get back here, no worries – bounce around as much as you want. You’re on vacation. Do it up the way you want.