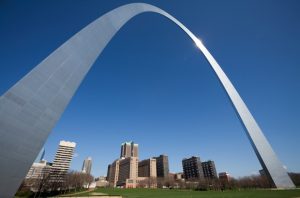 Meeting in St. Louis This Holiday Season? Here's How to Have the Best Day Ever

Do you find America to be boring in the middle? You’ve probably never been to St. Louis, the antithesis of your stereotypical flyover metropolis. The city is old, for starters – old in that way you can really feel, its French roots sticking out further than many might expect. St. Louis is a place suspended between multiple Americas – a place apart even from Missouri, itself no stranger to outsider status. Even after decades of decline, it remains a sophisticated town, a center of art and culture, earning its stripes back in the time when this used to be one of the larger cities in North America. Perfect? Nope. Dull? Never. If you're headed this way anytime soon, take a day and dive deep into one of America's most misunderstood places.

It starts with a cozy breakfast at Café Osage

A stone's throw from some of the city's worst blight, Bowood Farms is a smartly-designed garden center and urban farm, a pleasure to visit at any time but perhaps more so during the festive holiday season. Right on premises, this cozy café does a very good breakfast, pulling from their own gardens and some very good regional purveyors. Early riser? They're open by 7am, most days. (4605 Olive St.)

Get the blues at one of the country's best new museums

It all depends what you're used to, of course, but St. Louis does have plenty of winter days where being indoors is the best policy. Happily, many of the city's best-known cultural institutions are free to enter, meaning nobody gets bored when the weather starts to get ugly. You'll have to pay to visit the National Blues Museum, an impressive new addition to the national scene, but it's well worth it – interactive exhibits (including plenty of music to listen to, naturally) offer a proper immersion and help the uninitiated trace the fascinating past of one of America's finest musical traditions. (615 Washington Ave.)

Shop one of America's most historic markets

Just as New Orleans has the French Quarter, St. Louis has Soulard, the city's oldest neighborhood and a living reminder of the region's rich French history – all without a tourist in sight. (Well, mostly – the annual Mardi Gras celebration is kind of a big deal around here, as you might expect.) Wednesdays through Saturdays, Soulard's public market (since 1779!) hums with the energy of actual local people doing their actual shopping (produce, spices, what have you), practically in the shadow of the modern downtown skyline. Here on an off day? No matter – shops like La Belle Histoire offer a touch of Royal Street, while neighborhood joints like Bogart Smokehouse will happily feed you (try the pastrami), if you're feeling peckish.

Chicken adobo, pancit, garlic fried rice, Spam fries – probably not what you were expecting to find at one of the city's most popular restaurants right now. Still, when you think about it, what better way to keep warm during winter than heaping plates of comforting Filipino food? This smash-hit food truck that's now gone brick and mortar, just opposite historic Tower Grove Park, sums up modern St. Louis, and, for that matter, many American cities, fairly perfectly: expect the unexpected. (3559 Arsenal St.)

Stepping out of the winter chill into the warm glow of the city's century-old cathedral – formally known as the Cathedral Basilica of St. Louis and home of the regional Archdiocese – has been known to cause temporary shortness of breath among the unprepared. A multi-piece installation that began in 1912 was only very recently completed – it's one of the largest and most impressive mosaic displays of its time, including work done by Tiffany Studios (yes, that Tiffany). Can't get enough? Down below, the Mosaic Museum brings you up to speed on the centuries-old tradition. (4431 Lindell Blvd.)

Try the weird beer at Earthbound

A re-invigorated brewery on up-and-coming Cherokee Street dating back to the 1860s (in case you forgot, this city has long pretty much run on beer) is now home to one of the city's most playful microbreweries, home to some seriously "weird" (their word) beers. Try the scotch ale brewed with (oh, why not) scotch bonnet peppers, or the birch bark porter, or pretty much anything else on their ever-changing tap list. While you're in the neighborhood, have a look around the 'hood – if you've had one too many, perk up with a coffee at Mud House – this is one of the better roaster / café combos in town. (2710 Cherokee St.)

Dark yet? Probably, at this time of year. That's fine – just head toward the giant cloud of ambient light hovering over the Missouri Botanical Garden, 79 acres in the heart of the city that are, through January 1, the site of a million-light holiday installation. Known as Garden Glow, the show runs most nights until 10pm. Purchase a timed ticket in advance at missouribotanicalgarden.org.

Have dinner in the past

Just west of the gardens, The Hill neighborhood, through all its ups and downs, remains one of the top examples of a classic Little Italy remaining in North America. That's not surprising – if you had to choose one type of cooking to define St. Louis, it'd probably be Italian-American – this is, after all, home to one of the country's most unique pizza styles (heard the one about Provel cheese? You will!) and a place where people still eat toasted (deep-fried) ravioli as a snack. From delis to pasta spots to regular-filled red sauce joints, you can take your pick, but for something magnificently old-school (and a little more refined), book a table at Dominic's, years ago referred to in a national publication as one of the two best Italian restaurants in the United States. The other one? Also in St. Louis. (5101 Wilson St.)

Ready to make the trip? Here's a look at current fare to St Louis (STL) from all over the US and Canada.