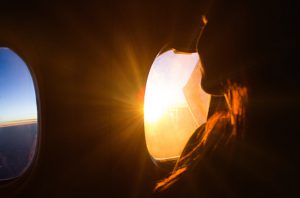 Ask someone their opinions on air travel and chances are you'll get an earful. They think it's too uncomfortable. They think it's too expensive. The airline lost their bag/canceled their flight one time ten years ago and it is a grudge they will forever hold. Air travel is just not an indifferent shoulder-shrugging sort of topic for most people.

Even so, flying from A to B can be absolutely painless—possibly even pleasurable—if you make the most of it. Here's how!

1. The upcoming “dead zone” from January 9 to February 15 is perhaps the very cheapest time to buy domestic airfares. After mid-February some schools go on break so fares go up. But there is no magic day of the week or time of year to buy the cheapest airfares. The “search on Tuesday” myth is just that—a myth.

2. If you’re prone to air sickness, try to get a seat over the wings.  It’s like sitting on the fulcrum of a seesaw: there’s less motion up and down.

3. A four-wheeled rolling suitcase is less likely to get tossed around by airline baggage handlers. They actually throw bags down the belly of smaller planes but they’ll roll them if they glide on four wheels. More baggage handler confessions here.

4. Even if you buy a ticket on a US-based airline, make sure the flight is operated by a European-based partner airline (such as buying on American but flying on British Airways). Even if flying from the US, you’ll get better monetary compensation (up to 600 Euros) if there’s a delay or cancellation.

5. But when flying on a non-US airline or flying overseas on any airline, US DOT-mandated protections for lost or damaged bags do not apply. If the value of your suitcase and its contents is over $1000 you can buy reasonably-priced excess valuation from your airline, typically up to $5000 in value.

6. Many credit cards offer free and automatic travel insurance for cancellations due to illness or injury or delays and trip interruptions as well as lost or damaged baggage. The Chase Sapphire Card and many cards co-branded with United and American have especially good protection. Some Citibank-issued cards even cover electronics lost or damaged in checked bags, which airlines will not take responsibility for.

7. If you are prone to altitude sickness when flying, buy a seat on the Boeing 787 Dreamliner or the Airbus A350. The cabins on these planes are pressurized about 2,000 feet lower than on other commercial airliners. You’ll find that you breathe easier and sleep better on long flights. The interiors of these planes are also more humid so your nasal passages and eyes, if you wear contacts, will be more comfortable.

8. Anyone of any age can join AARP, and you will receive travel discounts as a member. For example, British Airways will deduct $65 off economy fares, $130 off premium economy, and $400 off business and first class round-trip trans-Atlantic fares.