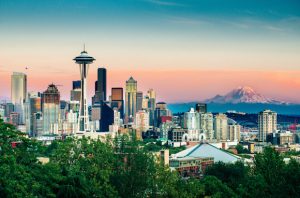 12 Things You Really Ought to Know Before Visiting Seattle

From rough-and-ready lumber town to industrial powerhouse to glittering high tech capital, it's been a wild ride for the New York of the Northwest. It's not over yet, either – the forest of cranes currently working hard to reshape the region's skyline will be your first clue. (Your second: Hearing the locals go on – and on – about how everything's changing.)

Visiting Seattle today gives you a ringside seat to the ongoing transformation of one of America's most livable regional capitals into what could become a world-class force to be reckoned with. Like any major transition, it hasn't been easy, but at least you're promised one thing: It sure as heck won't be boring. Heading up for the first time? Here a few things to know, before you get there. For the best airfares to Seattle right now, go here.

Heard the one about Seattle traffic? Don't worry, you will. It's all true, unfortunately. The easiest way to keep from falling in love with what is otherwise a rather likeable corner of the world is to attempt to navigate its often-ungodly gridlock. For maximum happiness, stay as close as you can to the things you want to see. No, seriously – walking distance is ideal, if you can manage it.

2. But, Hey, Check It Out – There's Actually Some Proper Transit Now, Imagine.

It'll be decades – possibly centuries – before Seattle has a complete rail network, but Sound Transit's stubby light rail line did get a little bit more useful this year, so that's something. The addition of just two stops – at the heart of the Capitol Hill business district and at the foot of the massive University of Washington campus – makes going wheel-free here even more appealing. Hop on board at the airport (make sure to get a ticket and make sure it's validated, to avoid the wrath of the local transit police) and ride to your downtown hotel, use the subway to sample the nightlife up on the hill, ride the street car from downtown up to Lake Union for a morning of kayaking – there's even another brand new streetcar that can take you from Pioneer Square, through the International District (what Seattle calls its historic Chinatown) and all along Broadway, atop up-and-coming First Hill and back into Capitol Hill, where it connects with the subway. Perfect? No. But for the casual visitor, getting around is getting easier by the year, it seems.

If you can handle the hills, grab a 3-day pass to the city's Pronto bike share program for $16 and go – rides under 30 minutes will be free, with a $2 charge for an additional 30 minutes. That's the ideal way to get around. If you'd rather have a car, Seattle is a Car2Go city. Not familiar? Unlike an increasingly antiquated Zipcar, Car2Go is point-to-point, meaning you can pick up and drop off anywhere within the program boundaries. (In Seattle, that means the entire city, pretty much.) Just download the app, sign up and do the tutorial – it takes a second to figure it all out, but once you do, you'll be able to do it in your sleep. (Do all this before you leave home – it can take some time, but it's worth it.) If you're more comfortable leaving the driving to someone else, don't worry – this is the country's #2 tech city, after San Francisco. Lyft and Uber are always just a couple of taps away.

4. You'll Get A Workout, But Seattle Is A Great Walking City.

It's not even twice the size of San Francisco – you could also just put on your comfiest shoes and go. A visitor could walk from the ferry docks (steps from increasingly interesting Pioneer Square, at the foot of downtown) and up into Capitol Hill in very little time at all, if they don't mind the extreme glute workout. (Some streets seem to go almost straight up into the sky, speaking of San Francisco – stick with Pike or Pine for a more gentle grade, not to mention a very interesting walk.) It gets a little trickier when trying to rope in fashionably cool suburbs like Fremont or Ballard, but, traffic permitting, you're looking at a very affordable Lyft or Uber ride to either from downtown. (If you have time for just one, stick to Fremont. Fremont's better. There you'll find the Theo Chocolate factory with its endless free samples, some of the better bars in town, great coffee at Milstead & Co. and superb if pricey restaurants like Revel, a sleek Korean bistro that's great for lunch or dinner. Fremont is great. You'll love Fremont.)

Seattle enjoyed a rather lengthy moment on the global stage at a time when Oregon's big city was still trying to shake that (in some cases, still-lingering) cow town vibe. Believe it or not, as far as some locals are concerned – and if you think you know American provincialism, come watch Northwesterners take it to an entirely new level – Portland as the world knows it today never really happened. Too bad. Seattle can puff itself up all it wants, but the fact is, if you're looking for the innovative, impressive-at-all-price-points culinary scene that Portland is now known for, you should go there. Seattle has somewhat sheepishly tried to ape it in some respects, but where it's now most comfortable is the high end of things. Think of the city's dining scene like Manhattan's, if it helps – lots of very good restaurants where money talks – whereas Portland is firmly (for a few more minutes, anyway) the Brooklyn of the region. Not that it's even smart to refer to Portland and Seattle as being in the same region. (Oregon and Washington often treat each other the way Europeans would the country next door – as if they were different planets. Which they kind of are, once you start paying close attention.)

6. The Food Is Fine, but the Beer Is – Once Again – Freaking Amazing.

As with so many other things that matter, Seattle was way early to the craft beer game. It's taken its time jumping onto the latest wave, but one sampling at, say, Holy Mountain Brewery (an easy hop from downtown, you can even walk along the waterfront) and it'll become plenty clear: Seattle beer rocks. There are other breweries, many of them, but for goodness' sake, start there.

7. Other Cities Can Say Whatever They Want. Seattle Still Owns Coffee in North America, No Contest.

You will consistently drink amazing espresso beverages, everywhere you go. Pretense-despisers from the many late-to-the-game towns that have turned coffee into an obnoxiously fancified lifestyle product will absolutely love Seattle's scene, which hasn't changed much in years now. First off, baristas in Seattle are often like bartenders in other cities – they're not there to make you feel better about yourself, or brighten your day. They're too busy fixing your drink and the drinks for the twenty other people that need them yesterday. For a crash course in how it's done around here, go straight to Espresso Vivace's frills-free sidewalk kiosk on Broadway. Prepare to be amazed. For more of the best coffee in Seattle, read this earlier post.

8. To See Seattle At Its Edgiest, Go South.

For the longest time, the southern half of Seattle was something you sped past on I-5 on your way in from the airport. Now, for those riding the light rail in from the airport, it's the first thing you see. You'll quickly notice that it's nothing like the Seattle of most people's imaginations. Like everywhere else in the region, however, things are changing; sometimes too quickly. You can't get to all the good stuff via rail, and some of the more popular commercial areas really aren't worth the slog for a visitor, but one neighborhood you really should bother with is Georgetown, a gritty, post-industrial wasteland that seems to attract an unusual number of very good businesses, from the no-screwing-around All City Coffee to the city's best deli (Hitchcock, try the pastrami) to new breweries, restaurants, nightspots, art galleries and more. It may take a little sorting out to find everything, but it's well worth the hassle. There's even a non-scary budget hotel down here, the Georgetown Inn, for people who are serious about experiencing everything the neighborhood has to offer. Which is a lot.

9. The Market Is Something Of A Relic. But You'll Love It Anyway.

In many ways, a stroll through Pike Place Market is a trip back in time, before the recession-era food revolution swept the continent. That doesn't mean that Pike Place Market isn't still one of the best in its class (and one of Seattle's best attractions.) Set aside some time to eat your way through it. Before you take your first bite, however, read this insider's guide.

10. If You're Going To Do Museums, Start With The Chihuly.

Why choose an expensive shrine to a popular glass artist, best known to many Americans as the guy who did that one lobby ceiling in Las Vegas? No matter how many times you've seen local legend Dale Chihuly's work, you've never seen it presented like this. There isn't a wet and dark winter day that can't be salvaged by a slow, deliberate study of the compact but surprising, indoor-outdoor Chihuly Garden & Glass, shoehorned into the cramped Seattle Center complex, just beneath the Space Needle. It's moody, it's gorgeous and anyone who tells you not to go there is just being a crank.

You can buy a combo ticket that gets you both into the Chihuly and up the Space Needle, but consider skipping the city's most shameless tourist trap ($22 a pop for adults, on its own) and riding instead up to the Sky View Observatory, a less-appreciated gem on the 73rd floor of the Columbia Center, aka the tallest tower in Seattle's growing downtown skyline. Tip: If you're too cheap to pay the $14.95 admission fee, at least go as high as the building's 40th floor Starbucks, open to the public and offering its own, very good views.

12. Can't Even With Those Downtown Hotel Rates, But Want To Stay Close To The Action? Sleep On Bainbridge Island.

Commuting on the all-day, everyday ferry to one of the most appealing suburbs in North America can be downright fun – more so when you're not an actual commuter and can properly kick back and enjoy the 35-minute journey. With frequent-enough service until late at night (last boat over leaves Seattle at 1:35am) and a round-trip pedestrian fare of $8.20 for adults ($4.10 for the under 18's), budget-watchers are almost nuts for not considering this option. There are plenty of good vacation rentals to choose from, but the Best Western Plus Bainbridge Island is a pleasant, safe-at-any-hour, 20-minute walk through Winslow village, to and from the ferry dock. Generously-sized rooms and a decent breakfast can often be had for around $100. Try finding that downtown at the height of tourist season. To find the best hotel deals in the Seattle area, go here.