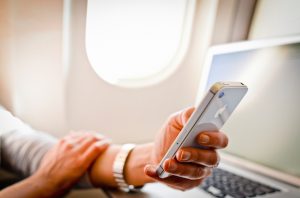 6 Ways You Can Get Booted From Your Seat

It's in their contracts of carriage: When you buy an airfare airlines do not "guarantee" a particular seat, schedule, or flight.  And airlines can be pretty persnickety about who they fly and where they seat them.  Back when I used to work for Eastern Air Lines, an employee flying on a company ticket had to wear a suit and tie in order to be accepted for transportation. We always flew in first class if there were seats, but one day I showed up at the check in desk with a nice suit but no tie and I was bumped back to economy. "The way you're dressed, you don't deserve to fly at all!" sniped the ticket agent.

But it happens to paying passengers, too, and for sometimes unpredictable reasons.  Actor Andy MacDowell was booted back to "tourist class" recently because she carried a pet pooch on board but was sitting in the first class bulk head row, which meant there was no under-seat area for the dog and its carrier (this is typical of most bulkhead rows). Why the Four Weddings and a Funeral actress was sitting in that row while transporting an animal isn't clear, since she let the airline know she was bringing a pet on board, but she was ignominiously sent back to an economy class seat and she wasn't having it on Twitter. "@AmericanAir HELP I paid for first class & they put me in tourist because of my dog that I pre-booked & paid for," she tweeted.

But it's not just airline employee dress codes and pets that can get you booted back to coach—or off the plane entirely.

1. The Air Marshall needs your seat

These guys still fly to protect you, and they're sometimes seated  without prior warning. If one of them shows up and needs your seat, you'll either be bumped off the flight entirely or reassigned. And you won't even get an explanation (obviously, the authorities don't want you to blab that there's an air marshal on board).

2. You messed with a crewmember

When Bobby Abtahi, a Dallas attorney, was rushing through one of those large revolving doors at New York's LaGuardia Airport, he supposedly "cut off" a Virgin America flight attendant who was attempting to enter at the same time. Abtahi was booted off his flight after the flight attendant complained to the captain flying his plane. At least Virgin later apologized for the "misunderstanding" and refunded his fare.

Actually, if you do anything to annoy cabin crew or fail to obey their instructions and ignore lighted placard signs, you risk being booted. When singer Sarah Blackwood of Walk Off the Earth couldn't get her toddler to sit down and fasten his seatbelt just before take off, her United Airlines flight returned to the gate and both were invited to deplane. "That's how babies are," she reportedly said.

4. The airline oversells or double-books a seat

Even in this era of sophisticated computer systems—or perhaps because of them—airlines oversell flights and even, on rare occasions, sell the same seat to two people. You're now entitled to up to $1,350 in cash compensation if you're "bumped" (do not accept a travel voucher!) depending on the reason for the bump, the length of any delay caused and the price of your ticket. In 2013, Delta was fined $750,000 for, among other bumping violations, not informing passengers that they're entitled to cash compensation rather than a travel voucher, and last year American paid a fine for similar infractions.

5. You're not properly dressed

Again, this is up to cabin crew, but if you wear a T-shirt with offensive wording, are exposing too much flesh, or are otherwise provocatively dressed, flight attendants and cockpit crew have been known to kick people off the plane or refuse boarding. Spirit Airlines once deplaned a passenger for refusing to pull up his baggy, underwear-revealing pants, and Southwest has been known to refuse passage to passengers whose clothes reveal too much cleavage or other body parts. Thankfully, airlines no longer require employees to wear suits and ties when flying on company passes, but they'll take it out on you if they don't approve of your fashion sense.

If you’re obviously inebriated or otherwise impaired, don’t expect to fly. You won’t be breathalyzed so it’s entirely up to crew member discretion.