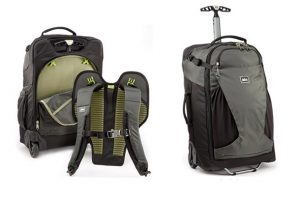 Can a Hybrid Suitcase-Backpack Actually Do It All?

Last month, we pitted backpacks against rolling suitcases to see which would emerge victorious. This month, we're road-testing a hybrid that claims to be the best of both.

When I set out to find and test a suitcase-backpack hybrid, I did so with a hypothesis already in place: Backpacks make the best backpacks, and everything else makes a pretty bad backpack. Occasionally I'll try out a suitcase or a car seat with "backpack straps," end up with bruises and back pain, and remember that just because you can put something on your back and carry it does not mean you should.

So when I discovered REI's Stratocruiser Wheeled Backpack, a carry-on suitcase/backpack hybrid, I was wary but intrigued. Could a company that is serious about backpacks create a bag that was both a high-performing roller suitcase and a comfortable backpack? I decided to find out.

At first glance, I was impressed at how much the bag looked like a suitcase but functioned like a backpack. Like a suitcase, it zips fully open (as a vertical flap rather than a horizontal); and has ample easy-to-access packing space and internal pockets plus a telescoping handle and exterior pockets. But like a backpack, it has contoured back padding and padded straps. There's also a detachable smaller daypack backpack.

The bag weighs in at about seven pounds—not as heavy some carry-ons but not as light as many of our lightweight favorites. However, the harness panel and the daypack can be removed, which brings the total weight to about five pounds.

To compare the similarities and differences of the bag types, I packed the same amount of gear into the Stratocruiser, a traditional backpacking backpack (an older North Face Rogue model), and a 22-inch carry-on suitcase (the Eagle Creek Tarmac AWD Carry-On) and then tested them on even and uneven surfaces, up and down stairs, and in tight places.

Comparing the backpack to the Stratocruiser hybrid, I was surprised to discover that, because it was so narrow and tall, the loaded-up backpack was actually more difficult to put on than the hybrid. Once on, the shoulder straps on each felt similarly comfortable. The Stratocruiser has a chest strap but not a hip belt, so you're always carrying the full weight of the bag on your shoulders rather than being able to distribute weight along your body. But, aside from the lack of a hip belt, the hybrid and the backpack performed similarly well in tests. Both managed turns in tight spaces well and both remained comfortable throughout the tests.

The hybrid had performed well against the backpack, but could it hold its own against a traditional carry-on? Yes. Comparable capacity, easy access, and internal pockets made the hybrid as easy to pack as a suitcase. The durable wheels and sturdy telescoping handle compared well to the suitcase too; the only place the Stratocruiser suffered by comparison was when I took a sharp turn while coming off a step. The hybrid wobbled slightly more than the suitcase, but managed to steady itself quickly.

There are a few design quirks to be aware of. To zip or unzip the main compartment or access the small exterior zip pocket, you have to unclip the front stowage area. This isn't difficult, but it is an added step. The bag also has nice additional details like a water bottle/umbrella pocket on the side of the bag and a kickstand to keep the bag balanced when upright. And when the daypack isn't attached, the stowage area doubles as a place to stash a jacket or other bulky gear.

While I still suggest treading carefully in the land of hybrid backpack-rolling suitcases, the Stratocruiser convinced me that there is a way to combine the best of both into a single bag. The appeal is tremendous, especially for people who prefer the convenience and style of a suitcase but want an easier way to carry a bag over rough terrain or up and down stairs.

Read the original story: Can a Hybrid Suitcase-Backpack Actually Do It All? by Christine Sarkis, who is a regular contributor to SmarterTravel.