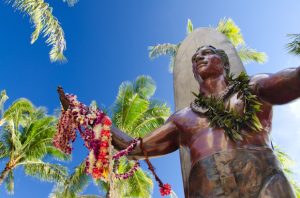 How to Have the Best Day Ever in Honolulu

As first impressions go, Honolulu can be a tough one. From the back of a taxi cab on a gridlocked highway after your interminable flight from pretty much anywhere, Hawaii's capital can appear to the uninitiated as some grimy, tropical retread of everything you had hoped you were leaving behind in the real world.

Sure, it's a big town – one that seems barely be able to function at times. And while in many ways Honolulu is very much still in the United States, this chaotic clump of humanity, almost slumping down its verdant hills and into the blue-green waters of the Pacific, is so much more, too. It's a heady blend of so many cultures, a place about as exotic as you can hope to find without leaving American soil. To blow past Honolulu on your way to some resort elsewhere in the islands would be a mistake. Ready to be properly introduced? Here is your guide to a day-long introduction. It starts with breakfast.

For many visitors to Honolulu, it's the food that finally gets them. From breakfasts that outstrip even the Deep South in decadence to multi-course evening feasts, Hawaiians eat well and often. It's tough to think of a more of-the-moment place to begin your day than Lee Ann Wong's Koko Head Café, located a short ride from most Waikiki hotels in the almost tourist-free Waimuki neighborhood. From Japanese-style fried chicken and eggs to a breakfast congee crammed with delicious meats and topped with a poached egg, this is hardly your typical breakfast. If you're not there when they open at 7, be prepared for at least a short wait. Walk it off. And then keep walking.

With beautiful gardens and pleasant parks, world-class shopping, walls of classic, 1970s architecture, hard-to-find noodle parlors, crowded Korean barbecue joints and all-night convenience stores, Waikiki isn't just another resort district – it's one of the country's most unique urban settings. Put on your walking shoes and explore, starting (of course!) with the beach. You only need to be prepared for approximately two miles of walking to cover the ground between the pocket beaches and relative quiet of Diamond Head to the cruise ship activity deck-esque scene at the iconic Hilton Hawaiian Village Resort – there's so much to see along the way, however, it's best to budget at least a morning to complete your tour. In that time, you'll get up close with a vast cross-section of Waikiki life, from the locally-popular Kaimana Beach to the nearly-elegant sands rolled out like a carpet in front of the pink Royal Hawaiian hotel, built in the 1920s and once upon a time a top pick among visiting celebrities. Squeeze your way along the seawall past the neighborhood's finest hotel, The Halekulani, detouring into the adjacent Waikiki Beach Walk shopping village (one of the nicest additions to the neighborhood in recent years), before continuing into the wide open spaces of Fort DeRussy, a military reservation and pleasant oceanfront park that's largely open to the public. Your final stop will be the appealing swimming lagoon that's a highlight of a stay at the Hilton, though the vast expanse of Kahanamoku Beach (named after the godfather of modern surf culture) just past the sandbar is an equally worthy spot for a quick dip. Is it time for lunch yet? Good.

Waikiki is of course so much more than a beach – no tour is complete without actually exploring the neighborhood proper, the one jammed in behind ocean-adjacent Kalakaua Avenue. Detour through the dense back streets and stop for lunch at Marukame Udon, a ripped-from-Japan (quite literally) noodle parlor on Kuhio Avenue, where most of Waikiki's good, cheap food can be found. Prized for its classic udon noodles and near-perfect broths, you can expect to find this place quite crowded at peak times. Grab a car and see the other side.

If you've only one day on O'ahu en route to some place else, it's almost criminal not to get out of the city – Honolulu's finest asset apart from its unique culture is proximity to some of the greatest outdoors on the planet. Time is of the essence, however, so eschew the remote and trafficky North Shore and make the short drive over the hill to the windward side of the island. Here, Kailua may at first appear to be just one more middle class suburb – don't worry about it, because one glance at sunny Kailua Beach and you'll know you're very much in the right place. Get out on the water.

Seriously – since you're already here and no doubt admiring them, out there across the bay, go to the Mokulua Islands. These iconic rock piles just off the coastline are perhaps one of the most Instagrammed spots in the state for a reason, with popular pocket beaches and swimming spots worth the trek. Want to go? The very good Kailua Beach Adventures can outfit you or link you up with an organized paddle – pickups from Waikiki hotels are available, if you've decided to not bother with a car. Get back in time for happy hour.

If this is your only night anywhere near Honolulu, you've no choice but to head back to Waikiki and House Without a Key. A smart but casual highlight at the classically luxe Halekulani, three things make this indoor-outdoor bar and grill a must as the sun starts to head down: One, there's the setting, right on the water, the envy of everyone passing by on the seawall. Next there's the fact that these are some of the tastiest mai tais in Honolulu. And, finally, there's the live, traditional entertainment, with local stars like the regal Kanoe Miller, former Miss Hawaii (1973) making regular appearances. Note: Don't worry about getting too dressy, but it's nice to look at least a little bit nice here, even if the official dress code is "casual resort wear." Kidding – and even if you're not, it's worth making room for at least one of the restaurants in Honolulu's wonderfully old (and now, increasingly rejuvenated) Chinatown. Among a growing crowd of very good options, Lucky Belly still stands out for its short but potent menu of small plates and ramen bowls. Should you be finished with noodles for the day, or if you need a nightcap after your ramen, sister restaurant Livestock Tavern is just next door – they've got a seasonal, easy-to-like New American menu and some of the city's best cocktails.

Have a look at our most recent fares to Honolulu HNL from all over the US and Canada.