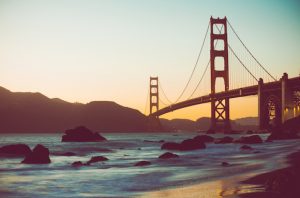 Picture-Perfect: 5 Great Views of the Golden Gate Bridge You Might Be Missing

There's a good reason why San Francisco's Golden Gate Bridge is one of the most visited – and photographed – landmarks in the world. Maybe you've been, in which case you know: Besides being one very attractive bridge, the Golden Gate, constructed in the 1930s, sits at one of the most dramatic points along California's endlessly photogenic coastline.

For many visitors, a stop at the San Francisco side of the bridge or a windy walk across are as good as it gets. You can definitely do those things – if you go, definitely check out the new visitor's center, right at the foot of the bridge – but that's just the beginning. There's so much to see and do beyond the usual bridge selfies, from day-long hikes on the Marin County side to scrambling through the military detritus of the vast Presidio to cocktails under the bridge (well, almost) at one of the Bay Area's best hotels.

Is a visit to San Francisco in your future? Just steps off the most well beaten paths, you'll find five of the best views of one of the best bridges ever built.

Providing the world-class backdrop to a world-class span, the protected Marin Headlands soar sky high over the northern end of the bridge. Most visitors are content to crowd into the first pull out – and that's certainly an incredible photo op. But to really have your breath taken away, take the long and winding road all the way to the top. Up at nearly 1,000 feet above sea level., your reward is an almost-aerial view of the bridge and the city. (On a really clear day, you'll get a lot more than that.) Don't miss it.

The bridge enters San Francisco via the Presidio, a historic military post that's more like a small city, filled with appealing old architecture and crumbling, disused infrastructure left over from a very different time in American history. Just a short walk along the bluffs from the Visitor's Center on the ocean side, a line of strategically placed artillery batteries dating back to the late 1800s offer a view straight on to the bridge, thanks to that slight curve just past the toll barrier. Zoom in for a dramatic shot, particularly at rush hour when the lanes are often jammed with traffic in both directions.

Crabbers and fishermen flock to this Presidio relic just in front of the popular Warming Hut Café, sharing space with hungry pelicans and photographers looking for the perfect picture. Standing at the far end of the pier, you can often get a clear shot of the patient pelicans staring intently into the water, with the bridge just beyond.

Hidden away in one of the city's priciest enclaves and a steep walk down from street level, this rocky, protected cove may see slightly less out-of-town traffic than some of the other city beaches, but it's one of the most photogenic. It also has a great view up the bluffs to the bridge – for the best spot, all you have to do is look for the local wedding parties mid-shoot.

Occupying the former officers quarters at Fort Baker and very nearly underneath the bridge on the Marin County side, Cavallo Point Lodge is one of San Francisco's top hotels for those who don't mind the quick (and very scenic) commute. Some guests don't have to move very far from bed for a bridge view, but to really take it all in, a walk along this easy trail through the open lands above the hotel is just the thing. If you're not already staying at the hotel, at least stop in for a cocktail, once you've finished. Of course, you're also really close to the laid-back, old-timey bar at the Presidio Yacht Club (not nearly as fancy as it sounds). Just down by the water, it's open to the public Thursday-Sunday. Choices, choices.

For a look at current fares to the Bay Area, see our listings for San Francisco (SFO), Oakland (OAK), and San Jose (SJC).