From rib-sticking pierogies at Veselka to cheap slices at Joe's in the Village, you're never far from something cheap and good in New York. And while you could always go with a classic – they're typically classics for a reason – one of the best things about the NYC food scene is how quickly it changes. From the most expensive dinner of your life to the fastest, easiest grab-and-go lunch, it seems like there's always something new to try.

Headed to town soon? Here are ten recent (and semi-recent) additions to the scene, all firmly on the beaten path and in close proximity to the things visitors like to see and do. Because while we're all for going off the tourist trail, you shouldn't have to take two trains and a bus to save a few bucks on lunch. Happy eating! Just across the street from the 9/11 Memorial and with big views of the Hudson River, this vast (and rather fancy) dining hall, opened in 2014, is a smash hit with neighborhood worker bees for its well-curated selection of some of New York's best casual eats. Close to the top of that pile is Mighty Quinn, an East Village transplant offering something close to Manhattan's best 'cue. Go ahead and try the smoky brisket – you'll see. (mightyquinnsbbq.com) New York has taken its share of lumps for a less than sizzling taco scene, but a group of friends from the West Coast borderlands has done more than their share to heat things up with this refreshingly real-deal take on the classic cheap eat. A relative newcomer to the wildly-popular arcade of edibles in the Meatpacking District, Los Tacos is easily one of the Market's top stops. (lostacos1.com) This Brooklyn favorite has been spawning all over – they're even in the fancy food court at the bottom of the Plaza Hotel, next to Central Park. (Put down that dirty water dog and get across the street, now.) The shop's location at the Ace Hotel, in hipper-than-you NoMad, also happens to be a great fast lunch option near Herald Square. It's $7.75 for a half and $11.75 for a whole – sample the entire menu, it's terrific, but start with the General Tso's, stuffed with crispy chicken, sweet and hot sauce, avocado and fried shallots. (no7sub.com) The East Village isn't exactly a budget eats desert – so why slow down for a veggie burger? Simply because this is one of the best veggie burgers in town, packed with grains, well- seasoned and tasting more like the real deal than you might expect, all without resorting to the addition of weird flavors or fillers. It comes with Muenster cheese, lettuce, tomato and pickle on a pleasingly squishy potato roll. If you can't find a place to sit, Tompkins Square Park is just at the end of the block. (superiorityburger.com) The cheap-eating New Yorker's quality of life ticked way up with the arrival of this gorgeous Northern Chinese dish a few year's back. Launched out of a dingy, basement food hall in Flushing, Queens and eventually making its way to Manhattan's Chinatown, Xi'an Famous is suddenly everywhere you are and for very good reason. Cold day? Feeling poorly? Don't tell your Nana, she'll be crushed, but chicken soup's got nothing on a plate of this fragrant and filling deliciousness. (xianfoods.com) From Times Square-adjacent to the bottoms of the Financial District, this cool, Cambodian sandwich chainlet is pretty much taking Manhattan – at least at lunch time. Started in a parking garage near Union Square, they've been remarkably successful in mainstreaming bold Asian flavors with the cubicle jockey set – try the five-spice glazed pork belly with chili mayo, pickled carrots, cilantro and cucumber on a roll sometime – ham and swiss on rye this ain't. None of their modern bánh mì are boring and they're all under $10, except for the coconut tiger shrimp ($10.95). 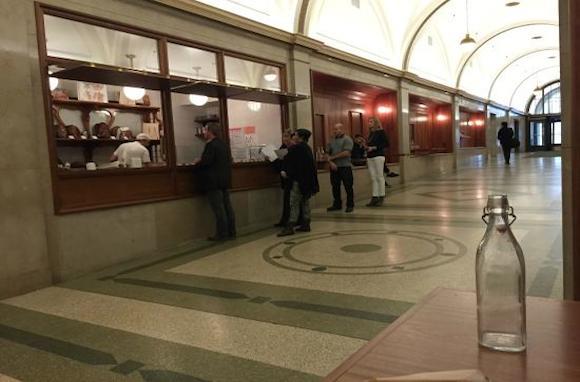 Hidden inside a lower Broadway office building not far from City Hall and the foot of the Brooklyn Bridge, this terribly smart bakery has everyone going the extra block or two for their delectable pastry and breads. Tasty little pies come with mozzarella, tomato and basil for $9 – add pepperoni and other toppings for a buck apiece. In a hurry? Order online – it should be ready when you get there. (arcadebakery.com) Spicy Szechuan is fast taking over from the usual Americanized fare as the go-to in a city that practically runs on take-out Chinese; a bowl of dandanmian is the ultimate gateway drug for those into experimentation. Tingling with peppercorns, spicy with chili, salty and sweet with soy and rich with pork, this used to pass for exotic but these days, it's practically the new fried rice. Try them at this so-hot-right-now East Village spot – if you hate crowds and waiting, order ahead for takeout. (handynasty.net/east-village/) It's not the first thing you think of when you think New York, sure, but one of the city's most popular meals under $10 these days is the humble arepa, served with flair at this spot with locations in the East Village and Williamsburg – Rockaway Beach, too. Start with the menu's flagship item – it's a mountain of shredded beef, well-seasoned black beans, queso blanco and sweet cooked plantains, all crammed into a crispy, grilled and baked white corn flour pocket. Never had anything like it? Time to get on that. (caracasarepabar.com) New York famously takes its breakfast to go; the city is littered with delis, carts and bodegas proffering the classic egg and cheese on a hard roll for a couple of bucks. Of all the many recent efforts to upscale essential NYC foodstuffs – heard the one about the $18 bagel? – Court Street is in a small group that manages to walk the line neatly between raising the bar and raising prices. Good bacon, good cheese, good egg, good roll from Balthazar Bakery – boom. A steal at $8 and a great start to your day. (courtstreetgrocers.com)