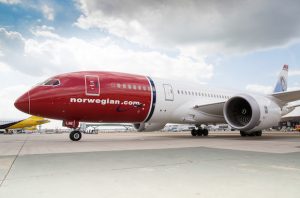 Aboard Norwegian Air: What to Expect (And What Not to Expect)

Although airfares from the U.S. to Europe remain stubbornly high on most airlines, two carriers, Norwegian and Wow, have been shaking things up by flying to London, Paris, Scandinavia and other destinations on the Continent at sometimes ridiculously low prices. Where other airlines are still charging $1000 or more round-trip, these airlines sometimes publish fares half as much or even less ($300 round-trip even from the West Coast in the off season is not unheard of). And they fly many routes nonstop and on modern Boeing 787 Dreamliners.

So what's the catch? You'll end up paying more in fees in some cases, but even with these you still save a lot of money. True, instead of flying into London Heathrow, you'll end up at farther-out London Gatwick and meals and wine aren't free in economy class, but at these prices you can buy yourself a lobster roll to take on board and use your savings for some gourmet meals once you land.

On a recent flight from New York to London on Norwegian, it was immediately clear that one was not flying on Qatar or British Airways. Airport crew are contractors, not Norwegian employees, so they're a bit rough. "Next!" they bark to customers waiting for check in, like we are at a Dunkin' Donuts or worse. At the gate, my boarding pass was scanned by an automaton (no eye contact, no talking) which might explain why my seatmate accidentally found himself boarding a flight to Oslo instead of London (he quickly discovered his mistake—the ground staff should have been more awake as well--and made the flight at the last minute).  Boarding is not by rows—or by any other discernible method, just "we're boarding now, line up."

But once you're in the air, things are better. Cabin crew were very friendly and efficient, as good as anything I've experienced on other airlines; they're dressed in snazzy plaid blazers and vests and stylish dresses by a Scandinavian designer. I was flying in premium and the seats had generous recline (much more than on most domestic first class flights these days) and generous legroom, so I slept most of the way (no pillows or blankets though). The inflight entertainment system has just a handful of selections (I counted about 40 movies and a smattering of TV shows), so you might want to bring your own. Seats in premium are in a 2-3-2 configuration and 3-3-3 in economy. Before take off, the captain exhorted us to "drink responsibly" (first time I've heard that).

Meal service was interesting to say the least. The food (one entrée choice only) was far from inedible (quinoa salad, chicken with rice, a rich chocolate fudge cake for dinner; lox with cream cheese and capers on a bagel just before landing) but cost-cutting was in evidence (both meals were served in a cardboard box with plastic utensils and flimsy paper napkins). It's free in premium, for sale in economy.

Beyond cabin service, Norwegian's fare rules on non-refundable tickets are notable for some unusual features. One, you can change the name on a ticket for just $60 (should you not be able to use it yourself) and second, you can change a flight after booking for $125 each way, which is less than on most international airlines.

And since Norwegian flies mostly new 787s, we enjoyed all that aircraft's advantages, such as a lower cabin "altitude" for easier breathing in-flight, moister cabin air to combat dehydration, and an improved cabin sound system so you can hear exhortations from the cockpit not to get plastered. Some people don't notice the difference flying in a Dreamliner, but I definitely do.

Speaking of sound, as we deplaned we were treated to Guy Sebastian's "Tonight Again" as exit music over the PA system—perhaps an exhortation to fly Norwegian another time, which I would gladly do.

For a look at current deals from Norwegian, visit our fare listings to Oslo, Stockholm, Copenhagen, Helsinki, and London.