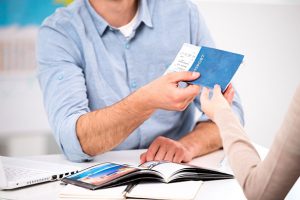 For most of the 35 years since American Airlines' AAdvantage program made its debut in 1981, U.S. travel-rewards programs have measured loyalty in miles. Fly 1,000 miles, earn 1,000 miles. Earn 25,000 miles and redeem them for a free domestic coach ticket.

Miles were never really the point, of course. They were just a convenient proxy for the price consumers paid for their tickets. But by the time airlines had robust computer systems in place capable of tracking customer spending, mileage-based schemes were the industry standard, and for the most part they remained so for decades.

A New Era in Travel Rewards

While several airlines toyed with the concept of revenue-based earning over the years, the movement only got real traction less than a decade ago.

When Virgin America launched its Elevate loyalty program in July 2007, it was the first U.S. airline scheme to be thoroughly revenue-based. Program members earned five points for every $1 spent on airfare; and when redeemed for tickets at market prices, points had a set value of around $0.02 apiece. JetBlue converted its TrueBlue program to a revenue-based scheme in late 2009. And, completing the loyalty trifecta, Southwest redesigned its simple flight-based program, Rapid Rewards, to reward members according to their spend in 2010.

RELATED: 10 Best Ways to Use Your Miles and Points

Among the full-service carriers, it wasn't until 2015 that Delta made the switch to spend-based earning. United quickly followed suit, leaving only American among the Big Three legacy carriers to carry on with a mileage scheme predicated on flight distance rather than revenue.

With the conversion of American's AAdvantage program to a spend-based scheme in the second half of 2016, the travel-rewards landscape will be fundamentally transformed. Every one of the largest U.S. carriers except for Alaska Airlines will then reward customers' loyalty in direct proportion to the dollar amount of their spend on airfare.

The New Game and How to Play It

What made mileage-based programs so popular, and among the most successful marketing tools ever devised, was the possibility of squeezing outsized value from them. A 25,000-mile coach-class award could be booked for a ticket normally costing $150, or for a ticket worth $1,500. With the cheaper ticket, a consumer would be getting 0.6 cents in value for every redeemed mile; for the more expensive ticket, the return-on-investment would be a full 6 cents per mile. Savvy travelers knew to save their miles for the pricier flights.

With the transition to spend-based schemes, the value of miles tends to be set, forestalling the possibility of maximizing their beyond narrowly circumscribed limits.

In Southwest's Rapid Rewards program, for instance, members earn 6 points per $1 spent on Wanna Get Away fares (Southwest's most popular fare type); and points are worth around 1.4 cents each when redeemed for Wanna Get Away tickets.

Delta's SkyMiles program is more of a hybrid, with miles awarded according to members' spend on revenue tickets, but award tickets priced dynamically according to supply and demand. Although Delta declines to clarify its pricing logic, it appears that the airline aims to solidify the value of its miles at around a penny apiece.

With significant returns limited to elite members, who earn higher multiples than base members, and to higher-priced tickets typically only purchased by business travelers, the infrequent leisure flyer traveling on a discounted coach ticket will be hard pressed to earn meaningful rewards.

So how can average travelers make the best of programs that are increasingly geared to reward only the airlines' highest flyers? Is it time for air travelers to set aside mileage-earning and just shop for the cheapest tickets?

In fact, for many travelers, the current crop of award schemes are at best a distraction and at worse a false promise. With the lackluster earning rates and high-priced awards, it will be years before average travelers accumulate enough miles to book an award trip. And if they single-mindedly fly with their primary airline in order to maximize their mileage-earning, they will likely have overpaid by hundreds of dollars by foregoing better deals from competing carriers.

RELATED: 7 Things You Should Never Do on a Plane

What is true for free flights is even truer for elite status and its associated perks. With the new minimum-spend requirements to earn elite status ($3,000 for entry-level status in United's MileagePlus program, for instance), earning elite perks on the cheap is no longer an option. To play, you'll have to pay.

Under the new loyalty regime, average travelers are best served by focusing on price, schedule, and in-flight amenities, and letting the frequent-flyer chips fall where they may. In the long run, they'll be ahead of the game financially and they'll get where they're going faster and more conveniently.

There is, of course, the alternative route to earning travel rewards: amassing frequent-flyer points through credit-card spending. With sign-up bonuses as high as 100,000 miles or more, and periodic category bonuses (3 miles per $1 spent on groceries or gas, say), credit cards have become the preferred earning vehicle for many rewards-focused consumers. But a critical assessment of the real value of credit-card miles shows that many people get better value with cards that deliver a reliable 2 percent cash rebate (1% when you buy plus an additional 1% when you pay) like the Fidelity Visa card and the Citi Double Cash card. As airline miles continue to decline in value, no-hassle cash rewards look ever more appealing.

For those who do opt for travel rewards, many will be best served by using a credit card that earns convertible points, rather than a card linked to a single airline or hotel program. The Starwood Preferred Guest card has been a standout in this category for years, awarding points that may be transferred to 27 airline programs, including those of Aeroplan, Alaska, American, British Airways, Delta, Hawaiian, and United. But the pending merger of Marriott and Starwood puts the future of the Starwood-linked card in doubt.

What about those eye-popping sign-up bonuses? There's certainly an argument to be made for opportunistically snagging an outsized slug of miles (assuming it's in the context of responsible credit management, of course). But that shouldn't be confused with an ongoing loyalty strategy, which is a marathon, not a sprint. In any case, the days of credit-card churning—serially acquiring and cancelling cards, in order to earn generous sign-up bonuses multiple times—are winding down, as card issuers increasingly limit re-applications.

What About Those Old Miles?

You're sitting on a cache of miles earned when acquiring them was easy and cashing them in was at least potentially a high-value proposition. What now?

As has been the case since the dawn of travel-loyalty programs, the value of those miles is continually under pressure and ever-decreasing. And there's no reason to expect that decline to level off or reverse course in the foreseeable future.

Since your miles are more valuable today than they will be next month or next year, the smart move is to redeem them sooner rather than later. Hoarding miles for that once-in-a-lifetime dream trip is a sucker's bet.

Read the original story: The New Rules of Travel Rewards Programs by Tim Winship, who is a contributor to SmarterTravel.