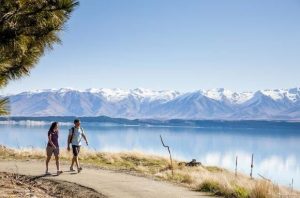 Imagine a country where a third of households own a boat. Where the biggest political controversy is whether to change the country's flag (it looks too much like Australia's, is the problem). Where the immigration officer at the airport, instead of grunting "Passport!" asks an incoming visitor, "How was your flight?" and then thanks you for coming. Eye contact included.

Where walking down a narrow sidewalk in Christchurch (a city that has seen more than its share of woe), a pedestrian thanks you for squeezing by. Not gonna happen in my beloved New York City.

Where, on my first visit 20 years ago, an Air New Zealand flight attendant wouldn't let me stuff my carry-on bag in the overhead bin. "That's my job!" he announced. What planet had I landed on?

On a recent four-day visit, I asked people why New Zealand seems to be such a happy, polite country, besides, of course, the natural beauty, temperate climate, and Auckland's Giapo Ice Cream and Gelato. And every time I asked I got the same answer: we have a prosperous middle class.

The highest paid executive in New Zealand made a whopping $4 million last year (that not so princely sum went to the CEO of Air New Zealand). Four million. In New Zealand dollars, by the way, which is a lot less than U.S. dollars. That wouldn't even count as expense report money for just a run-of-the-mill U.S. oligarch.

So the ratio of the highest paid employee to the average wage is a lot lower in New Zealand than in the United States and in many other countries. I just happen to think that that sort of relative equality makes people less on edge, less dog-eat-dog.

And probably less envious and greedy, too.

So when my cab driver brought me to the city from the airport and I asked him about the happy thing, perhaps he said it best: "I used to work in London. The fares would say hurry up! Go faster or I'll miss my flight. Here in Auckland, my last fare at the end of the trip said, 'Thank you so much for delivering us safely and in good time.' I would never want to live anywhere else."

As a travel writer, I also noted that although there are some comfortable hotels here, such as The George in Christchurch (shout out to George Bear!), you won't find any Four Seasons, Ritz Carltons, Amans or other luxury chains. Why? Too fancy for this middle class country.

Which brings me to Bernie Sanders. If he were president or prime minister of New Zealand, he wouldn't have a soapbox to stand on. There's no billionaire class here. There's barely even a millionaire class. Just a very large middle class enjoying weekends on their boats and hiking in some of the most beautiful scenery on earth.

Have a look at our current fare listings for Christchurch, Auckland, Queenstown, and Wellington.