Visiting Seattle's Pike Place Market? Before You Go, Read This.

Now just shy of 100 years old, the storied Pike Place Market isn't just a Seattle icon, it's one of the most popular places in North America. Said to receive more visitors per year than some Orlando theme parks and spread across multiple levels, cul-de-sacs and well-hidden courtyards in a 17-acre historic district, Pike Place is a Chutes and Ladders-esque jumble of memorable musts, right at the heart of Seattle's thriving downtown.

To properly experience Pike Place, you need hours, perhaps days – patience helps, too. Headed to the Emerald City? Here are a few things to consider, before you start exploring. Haters to the left

When locals talk smack about the market, what they're really saying – typically – is that they hate the crowds and the lack of parking. As a one-time resident of the city, I've yet to meet a old-timer that didn't absolutely love the market - they just can't stand that they don't have it all to themselves. (A familiar tune in the Northwest, come to think of it.) This really goes for Seattle in general, where traffic is the topic of discussion almost more than the weather, which is very often. It super-duper goes for the market, though, served by a handy light rail station just steps away at Westlake. The slow-growing system serves a string of neighborhoods between the airport and, as of this year, the gargantuan University of Washington campus, with a handy new station on Capitol Hill's bustling Broadway, right along the way. Staying anywhere near downtown? You're in one of the West's rare pedestrian-friendly cities. Take a walk. It's possible to do a quick run through the market in under a half hour, but you won't see very much – Pike Place is so much more than, well, Pike Place. From a quiet, early morning coffee in the 2,000 square-foot market garden with its sweeping bay and mountain views to boozy burlesque late nights at Can Can, the market is a city unto itself with a daily schedule stretching a mile long. Definitely don't rush it. For maximum fun, stay over

Seattle has plenty to see and do, but much of it can't compete with leisurely days of shopping the market like a local – like you're headed home to cook dinner, perhaps even right upstairs. Attractively-priced vacation rentals just steps from the action can be found through sites like FlipKey. Suddenly, all that fish they're throwing around becomes useful for more than just another picture on your Instagram feed. 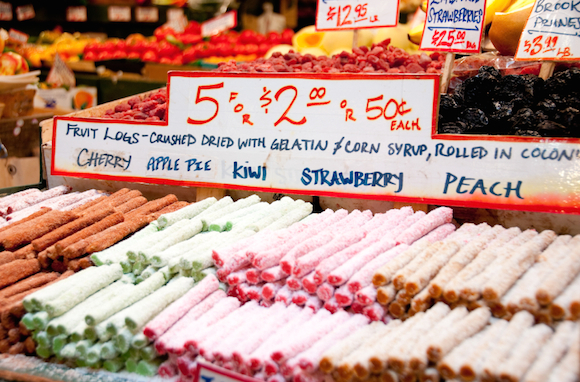 Seattleites tend to love their own food scene slightly more than they should at times, particularly at the prices they're typically asked to pay. Much of what's on offer in the market feels like it belongs back in the 1990s, when it was last seriously relevant – if you're looking for a cutting-edge food scene, head to Portland. How, for example, the church carnival-level mini-donuts at Daily Dozen ever became famous beyond First Avenue is a mystery, while anyone eating those giant pork buns at Mee Sum had better have a dentist on their payroll. (Actually, never mind – there's not enough filling to do much damage.) And let's not start on the so-called "local favorite" food vendors that still reheat orders in microwaves, or the so-called French bakery that would be kicked out of France for its joke pastry. It's not just the old stuff, either – Beecher's makes some nice cheese, for example, but what they're really good at is branding. That famous macaroni and cheese? Good, but not so much the world's best. (The tomato soup, on the other hand, that's worth every cent, particularly on a chilly winter day.) What you should eat: the generous free samples, for starters, at the Ellenos greek yogurt stand (who needs ice cream, when yogurt is this good), the decent tacos al pastor at Los Agaves, blackened fish sandwiches at Market Grill, hot buttered you-know-what at the Crumpet Shop on First Avenue, fancy snacks and cocktails at the Zig Zag, anything off of the top-notch happy hour menu at Cafe Campagne (Monday-Friday, 4-6) – the list of things you should be eating and drinking is very long. You don't have time for nonsense. Tip: If a market stall or restaurant has put up one too many signs yelling about what you can't do while in line at their establishment, paying them money in exchange for goods and or services, you might just be walking into a tourist trap. Things could look quite different, the next time you visit

The remaking of Seattle's waterfront isn't coming easy – if they haven't already told you, ask a local! – but it's happening. This means big changes for Pike Place, which will undergo a massive transformation to connect it to the action along Elliott Bay. They're saying things will be done next year – best to take that with a grain of foraged Northwest sea salt. Read all about it – and donate to the cause, maybe help speed things up a little – at PikeUp.org. Take your selfies, but skip the original Starbucks

Not because it's Starbucks – this is Seattle, Starbucks is as much a part of the furniture as the Space Needle – but because the coffee behemoth's new First Hill roastery/café /nightclub (kidding about that last part, sort of) is far more impressive. Besides, service at the market store can be terrible, following the "if you yell at them louder in English, maybe they'll understand" method of customer service. Also, if you want a cup of coffee and want nothing to do with Starbucks, head below street level to Ghost Alley Espresso, one of those steps-out-of-the-way gems that too many market visitors never seem to find. (It's also a meeting point for the market's popular ghost tours.) For the first time in years, it occurred to the people in charge of such things to clean the by-now insane gum wall, one of the market's weirdest attractions. Located on lower Post Alley – just past the espresso bar, actually – now's the time to make your mark, with a crop of new used chewing gum slowly taking its rightful place on the freshly-scrubbed brick wall. Yum.

Ready to make the trip? Here's a look at current deals to Seattle (SEA) from all over the US and Canada.