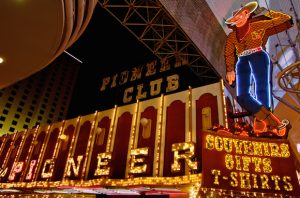 Now Is the Time to Do Downtown Las Vegas

Watching the transformation of Las Vegas' historic core has felt at times like a bad-dream version of Wheel of Fortune – you're always down to the last letters, but with no inkling how to solve. Then you finally figure it out, how it's all going to end, when suddenly, letters start disappearing from the board. Perhaps they are replaced by other letters, ones that makes no sense. And then someone wanders on set and lights the board on fire, just because. You're almost there, they keep telling you. Almost, but not quite.

Complex puzzle it may be, but these days, Downtown Las Vegas feels closer than ever to making sense – with so many parts now moving, things are beginning to feel almost coherent, no matter how many misfires, bad ideas and overextensions might threaten to cast a shadow over its successes.

It's not perfect. It's not always so aesthetically pleasing. But that doesn't change the fact that today, in Downtown Las Vegas, you can attend the symphony (or ballet) in a world-class concert hall, visit one of the West's better museums, check out the work of a surprising number of artists – oh, and also you can gamble. You can bike there on a growing network of well-defined lanes, store your two-wheeler at a bike valet inside the glittering transit center, browse the very good Friday farmers market, meet friends for cortados and avocado toast, or rustic Thai food or Austin-worthy brunch, take your kids to a safe and well-maintained playground, browse the stacks at a new independent bookstore or just catch up on some work at some of the city's best cafes. So it doesn't look like Paris outside. This is Nevada – if you can't handle things rough around the edges, you're in the wrong state.

What's remarkable is not that these things exist, it's that they've all combined together in a part of town few people believed in, in a city most continue to insist isn't real, to create a true downtown, one that has almost-finally transcended every middling scheme and master plan perpetrated on its sun-baked streets to almost organically become this place where living, working and playing might actually be – gasp – fun. Surely, the future is filled with more stops and starts – by now, everyone's used to it – but right now, this is one of the country's most unique (and entertaining) city centers. You should come visit, and here are just a couple of reasons why. From raw tacos at Vegenation to ramen at Itsy Bitsy, world-class shrimp and grits for breakfast at Eat, fun gastropub fare at Carson Kitchen and creative donuts at O-Face – both tucked into the renovated John E. Carson Hotel building – not to mention out-of-the-way finds such as the healthy but craveable eats at the humble Bronze Café, located inside the Gay & Lesbian Community Center, downtown is officially one of the best places to eat in the entire valley, as far as locals are concerned. Not that visitors aren't getting the message – waits for tables at the better spots can be ridiculous. Those who've followed this decades-in-the-making area straddling busy Charleston Boulevard might think of it as a land of stops and starts. But while the players may change every now and then and it can be hard to keep up with what's going on even if you live around here, a wide selection of galleries, destination-worthy shops and some rather fine hangouts make what's referred to as "The 18b" – paying tribute to the district's 18 original blocks – a serious neighborhood that you shouldn't miss. Ideally, you'll be introduced during the First Friday art walk-meets-street party – the next one's February 5 – but any other time, pop in the likes of the Arts Factory or Art Square, little beehives of activity that offer a glimpse of the goings-on around here. Weird, wonderful Container Park, by Zappos CEO Tony Hsieh, attempts to remake a large swath of available hellscape into some sort of insta-kit, millennial-magnet city center. It may not quite have panned out as expected, but if all we got to keep was Container Park, job well done. Sort of. You enter this walled garden of unexpected delights – past the giant, fire-spewing preying mantis, salvaged from Burning Man – to find an array of small shops, food vendors, a wine bar and one of the most imaginative playgrounds around. The coolest part: Nearly everything is fashioned out of repurposed shipping containers. There's live music, there are special events, there's no entrance fee, it's fun. Take a look. Hit One of the West's Best Jazz Venues

Symphony Park may stand as a shrine to Vegas' inability to be normal, a wildly expensive performing arts complex set adrift in a sea of yet-to-be-developed land, but step inside the Smith Center's Cabaret Jazz theatre and you'll forget to be cynical. Like everything else at the Center, which hosts touring Broadway shows, the symphony, the ballet and more, the 258-seat club feels a bit over the top, but look where you are. As implied in the name, cabaret and jazz are on the menu, mostly – there's food and drink, too. If you're looking to dress up for the evening – but not end up seated next to shorts-wearing tourists who think 50 degrees is warm – here you go. Because not everything has to be new. The smallest and oldest hotel downtown, the Golden Gate, hits the century mark this year. And it's one of its most appealing spots in town, particularly after a recent and ambitious renovation project. The 99 cent shrimp cocktail – one of the earliest recorded shameless come-ons in town – now costs $3.99, but they promise that it's better shrimp now; you can get pancakes – or pie, but either way you can't fail – 24 hours a day at Du-Par's, one of downtown's best coffee shops. Out on the casino floor, nickel video poker and penny slots are a small price to pay for the entertainment – many of the downtown casinos have decided that tastefully but scantily clad young ladies are just the thing to keep people on the floor and gambling. Sometimes they dance. A lot of times they dance, actually. Just thought you should be aware. Crawl out from Under the Canopy

Where Fremont's famous ceiling of light and sound ends at Las Vegas Boulevard, real life – if you can call anything in Vegas real life – resumes. Yet another neon sign now welcomes you to Fremont East, a district that's gone from ambitious plan to vibrant neighborhood in a surprisingly short amount of time. From the micro-gallery spaces and wonderfully '90s Beat Coffeehouse and Records at the Emergency Arts building to Sunday brunch at Park on Fremont to the riff raff-free Downtown Cocktail Room, good and cheap eats at Le Thai and, way far down, the patio at Atomic Liquors, with its 180-degree view of downtown at its most apocalyptic, Fremont is officially overloaded with good stuff. Learn How Vegas Rose to Power

The impressive Mob Museum is set in a historic courthouse that played its own role in Mafia history (the influential Kefauver Committee held hearings here, back in the 1950s). You'll learn not only how the Mob – and their celebrity endorser pals – practically invented the Las Vegas of the popular imagination, but also get the full rundown on organized crime's impact on so many aspects of American life and culture. It's a surprisingly well-imagined and executed museum – also, it's fun. Well worth the price of admission. And Speaking of History – Get Yourself a Plateful

From salads mixed tableside at Hugo's Cellar (and a rose for the ladies) to oversized orders of prime rib at Top of Binion's to almost-like-Mama-used-to-make Italian cooking at Chicago Joe's – and, on a good night, the clubby, old school nouveau scene at Italian steak joint Andiamo – downtown is nirvana for those seeking to connect with old Vegas and its dining traditions. Veal ragu, anyone?

Have a look at our latest low fares to Las Vegas (LAS) from all over the US and Canada.