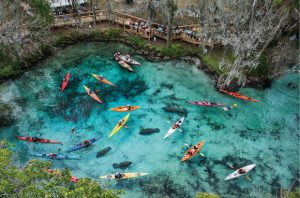 Had enough with Mickey already? Desperate to work off that newly acquired Butterbeer gut? Happily, the great outdoors are as abundant in Orlando as theme park rides – and it costs a whole lot less to play.

From world-class natural springs and canoe runs to all-day hikes and leisurely garden walks, you'll find it all within a short drive of your resort. Next time you're in town, take a break from Orlando's man-made marvels and experience Central Florida as it was before Uncle Walt and his squeaky-voiced pals arrived on the scene. The best lazy river ride in the world can't compete – not on value, anyway – with this seven-mile canoe journey along a winding, narrow waterway deep inside Florida's vast Ocala National Forest. Hundreds of springs both large and small bubble up from the earth, their fresh, clear water carrying you beneath an impressive canopy of semi-tropical old growth forest. Just $35 gets you a canoe and a shuttle ride back from the other end – it's the perfect no-brainer adventure. No lines, no waits and no character breakfasts here – the 11,500-acre Disney Wilderness Preserve, located near Kissimmee, offers just one thing besides pine thickets and a lovely, cypress-lined lake: lots and lots of personal space. Managed by The Nature Conservancy, the preserve is considered a model of conservation and habitat restoration – these almost silent lands, once ranched and logged very nearly to death, have been returned largely to the state in which they were found by the Spanish, centuries ago. Start your morning with a quiet walk along the preserve's 2.5-mile loop trail, which includes a stop at scenic Lake Russell. 3. The most exclusive park in Orlando is Kelly Park

This popular county park just north of Orlando offers all sorts of recreational opportunities, including camping, but the main reason locals line up early in the morning to beat the daily cutoff? The crystal-blue Rock Springs, burbling up from the ground at 68 degrees year-round – warm and restorative on chilly winter mornings, pleasant and refreshing when the temperatures veer toward the double digits later on in the year. A terrific tubing run takes about 30 minutes to complete (rent from vendors located near the park entrance), or you can just hang out at the swimming hole – just listen for the happy, splashing crowds. Get there early, though – for conservation reasons, only 330 vehicles are admitted each day. 4. Stop and smell the roses at Leu Gardens

From a planned, mini-rainforest to one of Florida's most impressive rose gardens, filled with varietals all suited to Central Florida's less-than-gentle climate, the 40-acre Harry P. Leu Gardens manage to pack a lot into a relatively modest amount of space. Once a private estate, the home and gardens, hidden away behind a gate along the shores of Lake Rowena, not far from downtown Orlando, are now a favored spot for romantic or just plain contemplative walks. 5. Do an serious hike at Black Bear Wilderness Area

Feeling fenced at the theme parks? In need of a real leg-stretcher? The 7.1-mile loop trail at this recently improved park near Sanford could be the cure. A collection of pathways and boardwalks lead through a variety of marshland – hikers should keep their eyes peeled for the preserve's namesake, as well as a number of other animals they're perhaps not accustomed to seeing on their morning walks back home. (Wild boars, for example. Those are quite something to see up close.) 6 Learn to paddleboard on Lake Killarney

Dreaming of your next Hawaiian vacation? Practice your stand-up paddleboard skills while you wait on one of Winter Park's many lakes. Paddleboard Orlando's waterfront rental shop will outfit you for $25/hr – if you need a lesson, they can do those for an additional fee. Waikiki this isn't, but Florida's relatively placid inland lakes offer a great opportunity to learn, before hitting the high seas – choosing this particular lake also offers a great opportunity to go for frozen custard and cheese fries at Shake Shack just next door, when you're done. (Clearly, you've earned it!) Many theme park visitors never discover that at its core, Orlando can be quite the charmer. Just east of downtown, Lake Eola and the historic Thornton Park neighborhood are a pleasure to explore, particularly by bike on a mellow, weekend morning. The city's newish Juice bike share program has stations all over downtown and the adjacent neighborhoods – you could even bike all the way up to Winter Park, past the Leu Gardens with a stop at the East End Market, a terrific little public market and food hall not far from the garden gates. Not much of a street cyclist? Explore the new Orlando Urban Trail, a dedicated bikeway offering another angle on the city, not to mention views of some of its many lakes. 8. Watch the scuba divers (or the manatees) at Blue Spring State Park

The largest spring along the St. Johns River spits out an average of 165 million gallons per day, attracting swimmers and divers to its waters (and its one amazing underwater cave, bring your scuba gear) throughout the year. In winter, however, Blue Spring becomes a refuge for a rather sizable manatee population. These curious Florida natives tend to favor the spring's warmer waters during the chilliest months – chilly by Florida standards, of course – check in advance before you visit, as access to the spring's ever-so-tempting waters can be restricted for months at a time.