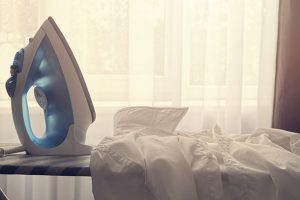 The best travel packers are those who have a clear sense of their priorities. For some, it's to keep things as lightweight as possible; for others, to be as prepared as possible for every eventuality, baggage-fees-be-damned; and for many, it's to arrive at their destination with a suitcase full of wrinkle-free clothes.

Let's say you belong in that last camp, at least on some trips. Maybe you hate ironing at your destination. Maybe you simply don't have time to manage wrinkled clothing on your trip. Maybe you just savor the challenge of attempting something that seems, at first glance, nearly impossible. Because squishing a small closet's worth of clothing into snug surroundings and then dragging them across the world is, essentially, a recipe for wrinkles.

But we are a resourceful species, and have come up with all sorts of theories about how to pack wrinkle-free. And because I loathe ironing and go to great lengths to avoid wrinkling clothes, I decided to test out some of the most talked-about wrinkle-fighting packing methods. Here's what I discovered.

RELATED: How Much Extra Space Do Compression Cubes Actually Buy You?

I will level with you: You should probably get a physical before embarking on bundle packing. This was the most aerobic packing method I've ever tried—think large-scale, full-contact origami with your clothing and you'll start to get the idea.

The premise is to create a core bundle of socks, underwear, and other items that don't wrinkle, and then carefully wrap consecutive layers of clothing around the core until you've created a large, soft bundle, around which you then gently arrange your most wrinkle-prone items.

This was my first time attempting the bundle method, and I would have been completely lost if I didn't watch this video on repeat as I commandeered a large open space and circled it for a full 15 minutes, first carefully arranging layers of clothing in a windmill pattern and then folding and smoothing and tucking the layers in on themselves until I had attained a roughly pillow-shaped bundle of clothing.

After stowing the bundle in an upright suitcase for 24 hours, the clothing emerged looking pretty good. The items around the outside&mash;a jacket and some shirts—were, predictably, the most wrinkle-free, showing only a few creases where I had folded the arms around the bundle. Items closer to the center showed slightly more wrinkles, but still looked significantly better than they would have if I'd rolled or folded the items and stacked them individually in the suitcase.

Verdict: Worth the (significant) effort if you must arrive wrinkle-free and are traveling with enough clothing to create a bundle. However, note that the bundle method requires the bundler to completely unpack to retrieve the items at the core, and isn't a good fit for anyone doing a lot of packing and unpacking, for instance on a multi-city trip.

Garment folders—flat, stiff-backed envelopes big enough to hold well-folded wrinkle-prone items and protect them against typical suitcase compression—are popular, particularly for people who travel with a stack of button-up shirts but who don't want to use a larger garment bag.

I loaded up an Eagle Creek medium-sized garment folder (designed to hold up to 12 items) using the included folding board with instructions for how to fold items to minimize wrinkling in the folder. I carefully creased and folded, smoothing out arms and whipping the board around like folding was a competitive sport (which it has to be, somewhere). While it couldn't do much for larger items like blazers or dresses, it handily contained a stack of shirts and a few pairs of pants.

After 24 hours, I unpacked and found the items wrinkle-free. However, the shirts and pants showed slight creasing where I had folded them.

Verdict: A solid choice for business travelers and anyone else hoping to keep wrinkle-prone shirts and pants separate and looking relatively pressed without much effort.

The theory behind wrapping prone-to-wrinkling items in a dry-cleaning bag or layering tissue paper between them is that by reducing friction, you're limiting the wrinkling that will occur in a suitcase. This makes total sense, but it doesn't account for the fact that you're still folding items initially to get them small enough to fit in a suitcase, and that's going to create at least some wrinkling along the fold lines. The other problem is that if you stack a bunch of individually wrapped items in a suitcase, that lack of friction is going to cause the items to slide around and bunch up as you move your bag, leading to (you guessed it) wrinkles.

Verdict: This approach seems best for anyone traveling with only one or two items that need wrinkle prevention.

Other Ways to Fight Wrinkles on the Road

Choose wrinkle-resistant fabrics: Blends and synthetics tend not to hold wrinkles the way cotton, linen, and other natural fibers do. And if you're on a trip that requires dress shirts, consider investing in items that advertise themselves as no-iron.

Layer Clothing at the top: This will make a difference primarily when you're wheeling your bag (rather than when it's sideways in the baggage hold or overhead bin during a flight), but you can avoid creating unnecessary wrinkles by packing your clothing at the top end of your bag, so heavier items like shoes and toiletries don't compress your clothing.

Pack less: The more you squeeze into a bag, the more wrinkly your clothing is going to get. Give your items a little room to breathe and they'll emerge with fewer wrinkles.

Upon arrival, act fast: As soon as you arrive at your destination, unpack and hang up wrinkle-prone items. Fire up a hotel iron or a travel steamer if you've got to be pressed to perfection. If you just need to treat a few areas, hang the item in the bathroom and take a hot shower, and then (while the door is still shut and the room is still steamy) use your hand to brush out the wrinkles. This, honestly, is my preferred method, and it works pretty well most of the time.

Read the original story: Wrinkle-Free Packing Secrets Put to the Test by Christine Sarkis, who is a regular contributor to SmarterTravel.