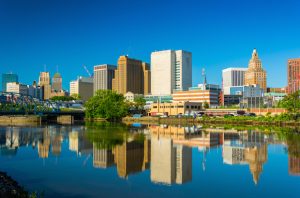 Boarding the free shuttle from my very nice, $109/night hotel near Newark Airport a few years ago, I had a feeling something was up. I was there because I had an early flight and hate waking up any earlier than necessary. Piling on to the bus and taking seats all around me were various European families with cameras and guidebooks. These were not people rushing to catch the first flight to Detroit – they were having way too much fun for that. They all hopped off at the first stop – the one with connection to New Jersey Transit trains to New York's Penn Station.

With a little further investigation, I discovered a pattern. While you and I might book a modest hotel near Newark Airport out of sheer necessity, international travelers saw the reviews of these properties (many of them quite favorable) and the nightly rates (even better), not to mention the fact that most of them offered free shuttle rides to nearby transit, often 24 hours a day. Why wouldn't they book immediately, given that equivalent hotels in Manhattan on any given night can cost up to four, five times more? So what's a little commute, right?

Of course right. And while a Newark Airport hotel stay for your next New York City getaway is certainly one of the top ways to go for extreme bargain hunters – Long Island City, Queens is another one to remember (you can read all about that here) there are many times of year where hotels in downtown Newark, even closer to Manhattan, are just as attractively priced.

I know what you're thinking. Newark? Really? If you're unfamiliar with the city, that's understandable. It is not, shall we say, the strongest brand. However, if you do know the city, you know that while it's not Santa Barbara – or even Jersey City – you know that the downtown area has undergone an immense amount of improvements in recent years. To boot: It's home to one of the most underrated transit hubs in the region (Newark's Penn Station, more about that in a minute).

From the new hotels and restaurants in the historic core to the thriving Portuguese-Brazilian district just to the east of the station (The Ironbound), not to mention  cultural institutions like the Newark Museum and the New Jersey Performing Arts Center, Newark's core is far from a wasteland, even if it might look like one in places. There are art galleries all over, some nice little cafes and restaurants on Halsey Street. Affordable artist lofts. Okay, so Newark can't compete with its neighbor just to the east, but it's shaping up to be one of the best places to stay on a budget when visiting New York. Why? Because from here, you can get pretty much anywhere in Manhattan – sometimes a lot faster than you'd expect.

While New Jersey Transit and Amtrak trains run in and out of Newark's handsome and busy Penn Station all day, every day, there's also the efficient and affordable PATH train, which many visitors aren't familiar with. You use a MetroCard, just like you would on the subway or a New York City bus. From here, within twenty minutes or so, you'll alight underneath One World Trade Center, in the dramatic new station designed by Santiago Calatrava. A quick transfer at Journal Square will take you to Manhattan's Greenwich Village and then on to Herald Square. Even on the weekends, when getting to Midtown becomes more complicated, that fast train to World Train Center never stops running – you can connect to the New York City subways once you get there.

So, where to stay? Your first price check should be at the Hotel Indigo Newark, housed in a historic Broad Street bank tower (designed by early starchitect Cass Gilbert) that's recently been renovated. Steps from New York favorite Dinosaur BBQ, a Chipotle, the Prudential Center and most importantly, Penn Station, one of the newer outposts of the fun boutique brand is, like many Newark hotels, quite often a killer buy – sample rates for weekends coming up were as low as $129 a night. That's nearly $100 less than the less-impressive Hotel Indigo in Chelsea, just across the river; in warmer weather, the difference would be much greater.

Slightly more business-like but equally easy on the wallet is the Courtyard Newark Downtown, which is often even cheaper - $119/night is not hard to find, that's on weekends as well. The Courtyard is also on Broad Street, a couple more minutes on foot further from Penn Station but by no means far away. There's a good fitness center on premises and that Courtyard staple, the Bistro, which serves a limited menu until 10pm most evenings, for those not looking to leave the hotel at night.

At the other end of Broad Street, also quite close to Penn Station, the Best Western Robert Treat Hotel was for years one of the only sensible budget choices in town – it remains a great deal, often around $100/night; it's a minute or two on foot from the New Jersey Performing Arts Center and the site of the new Whole Foods Market, now under construction.

Finally, right on top of Penn Station (well, pretty much) is the Hilton Newark Penn Station. Rates here generally tend to run at least fifty percent higher than other downtown Newark hotels. That's because it's a preferred pick for many business travelers who are here to work in the large Gateway Center complex, a giant mixed-use complex dating back to the 1970s that allowed companies to take advantage of Newark's cheaper rents and the adjacent transit hub without having to actually deal with the city. It's a short, indoor walk from the hotel to the trains – essentially, you're paying extra for the convenience.

Of course, there are times when downtown rates can soar – Devils games, big shows at NJPAC, weekdays during peak times. Don't give up on Newark, though – while it's one stop further away on New Jersey Transit, those airport hotels with free shuttle service generally remain some of the most reliably affordable in the New York area.

Plus, unlike at many airports, it really doesn't matter which one you choose, as long as the price is right (and you're happy with the reviews you've read online). All shuttles pick up and drop off from a centralized location at an AirTrain station. It's a short ride to the NJ Transit station; a combined fare of $13 pays for both; the ride to Manhattan takes about 25 minutes. Straightforward it's not – it'll take a couple tries to get used to the commute – but for many, the hotel deals make it a no-brainer.

Ready to make the trip? Here's a look at the lowest fares currently available to Newark (EWR).