How to Do Ecuador in 10 Perfect Days

Having been living in Colombia for the past six months, I thought it was about time I take advantage of my geographic proximity to one of South America’s greatest natural gems, Ecuador. I packed my beautiful new REI backpack, changed my Colombian pesos into dollars (Ecuador made the switch to US currency in 2000), and bought a one-way overnight bus to Quito.

Ecuador is often overlooked by the backpacking community, but its bustling cities, snow-capped mountains, laid-back beaches and thriving indigenous culture are enough to captivate any traveller. On top of that, the country is small at about the size of Colorado, and easy to get around by bus, a huge plus for me as I was travelling on a strict backpacker’s budget.

Arriving in the well-manicured capital of Quito after being in a bus for 15 hours was how I imagine children must feel setting foot in Disney World. I couldn’t help but marvel at the beauty of Quito’s colonial architecture. After setting my bags down in the Galapagos Hostel, a bargain at $10 a night including breakfast, I headed to Quito’s famous historical center, a UNESCO World Heritage Site, complete with cobblestone streets and horse-drawn carriages.

Located 9,350 feet above sea level, Quito is officially the world’s highest capital city. This didn’t mean much to me until I tried to summit the Basílica del Voto Nacional, a beautiful basilica that warrants a visit, if not its architecture then for its panoramic views of Quito. A few minutes into the climb, I found myself winded and struggling for breath. Altitude sickness, as it turns out, is very real.

For those seeking bar-lined streets and chic restaurants, look no further than Mariscal Fosh. Affectionately termed Gringo-landia by locals, Mariscal Fosh boasts a trendy vibe that attracts backpackers and young locals alike. Come after 11pm and you will find yourself swarmed by packs of foreigners and Ecuadorians sharing a beer, dancing Reggaeton, or looking for a late night empanada.

Before I left, I took a morning to check out Quito’s Teleférico, a gondola that takes you to the top of Pichincha, a dormant volcano, overlooking the city. The more ambitious choose to hike to the very summit, but I was content looking down on the sprawling city from the café located on the mountaintop. Be sure to go on the earlier side, before 10am at least, as it tends to get cloudy in the afternoon. 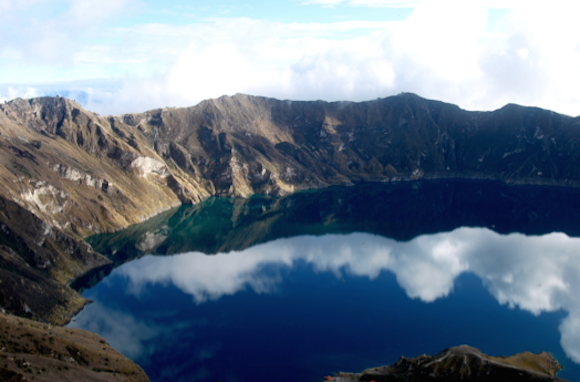 The Mountains: Quilotoa and Baños

After a weekend in the metropolis, I headed out to Quilotoa, a tiny indigenous town built on the ledge of a picturesque crater lake. It took four hours, two buses and a pickup truck to get there, but when I knocked on the door of one of Quilotoa’s only hostels, aptly named Hostel, I was not disappointed. Two indigenous women greeted me in Kichwa, Ecuador’s indigenous language, showed me to my room and built a fire to keep me warm through the night (Ecuador’s mountains get chilly; bring a jacket).

Quilotoa is one of those unique places that seems to have escaped notice of the guide books. It is completely and totally beautiful. Looking over the mountains, I had one of those moments that reminds you of your own smallness. In short, yes, definitely go to Quilotoa.

My next stop was Baños, a popular stop on the backpacker’s trail. You can mountain bike, white water raft, kayak, zip-line, and mountain climb (all of which cost upwards of $100). One of Baños’ biggest attractions is Casa Del Arbol, a lookout point with a swing that sits atop a mountain. It may not sound impressive but for the price of $2.50, I was willing to check it out. 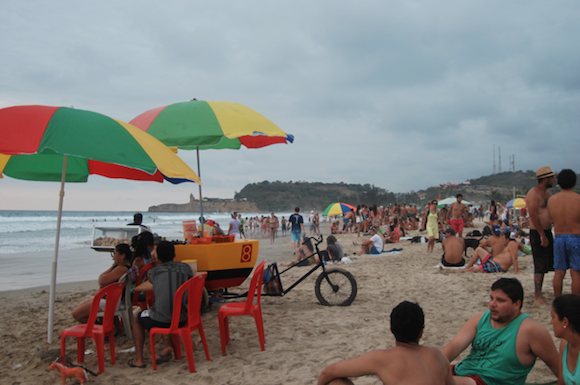 The Beach: Montañita and Ayampe

“If you want to party, go to Montañita.” You will hear this over and over again while in Ecuador.

It turned out everyone was right. I would guess that Montañita hosts more foreigners than Ecuadoreans. Prices are high, at $10 to $15 a night (I say this in complete seriousness; most hostels hover around $7) and $5 to $10 for a square meal. The beach is filled with surfers, sun-bathers and local vendors, and as the sun goes down, the drinks come out.

I enjoyed one night of dancing in the streets and bar hopping, but I decided to head to Ayampe the next morning, a smaller, more tranquilo beach town 45 minutes down the road. With one tienda and a sprinkling of hostels and restaurants, Ayampe is what I imagine Montañita was like 30 years ago. It was relaxing, rejuvenating, and gorgeous. I spent two days doing little more than reading on the beach and trying to get rid of the farmer’s tan I had somehow developed over the past several days.

Ecuadoreans like to say that Ecuador, with its jungle, mountains and beaches, is like three countries crammed into one bite-sized package. After 10 days, I can happily say that I agree.