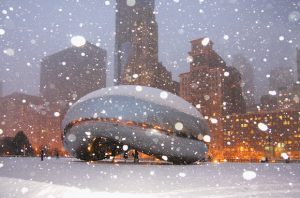 Baby, It's Cold Outside! This Winter, Cozy up to Chicago at Its Most Affordable

Michelin-starred restaurants, world-class hotels, beautiful architecture and incredible art – Chicago manages to have it all, with a fraction of the hassle certain other cities accept as normal. For a cozy weekend break, hold the extreme boredom, the Windy City truly is one of the finest options out there – particularly for those on a budget, because when the temperatures plummet in the Windy City, so do prices. From lodging deals to special events, we'll give you all the reasons why now – and not later – is the time for a date with Chicago.

1. Because winter is when Restaurant Week happens. You've no doubt heard about the city's sprawling culinary scene – it's time you were properly introduced. From January 22 through February 4, more than 350 restaurants across Chicagoland offer $22 set lunches and $44 dinners (exclusive of drinks, tax and tip) to diners hungry for both food and big savings. From lunch at Rick Bayless' Topolobampo to dinner at Hyde Park's hip new The Promontory, you'll need every day of the two-week event to make even a dent in the good stuff.

2. Because you can stroll some of the Midwest's most beautiful gardens – even in subzero weather. A city that endures this much winter can't possibly be expected to sit around and wait for things to bloom in the spring, whenever that's coming. When the weather gets terrible, Chicago takes the garden indoors. Start at the world-class (and recently renovated) Garfield Park Conservatory, where admission is always free and a new, facility-wide art installation is drawing considerable notice. Then head up to the Chicago Botanic Garden, where the annual Orchid show (February 13-March 14) draws crowds to see more than 10,000 orchids in bloom. Can't escape downtown's clutches? Lincoln Park's steamy little Conservatory is no slouch in the flora department – like Garfield Park, there's no charge to enter.

3. Because it's almost Chicago Theatre Week, which means cheap seats. Love Broadway, but hate the cramped venues and eye-watering prices? Chicago's theatre scene might be just what you're looking for. The city's annual theatre week, held February 11-21, is the perfect time to explore the possibility of a fun, new relationship. More than 100 productions typically participate, offering tickets starting at $15 (sometimes less) to a wide range of offerings, from big-ticket musicals (Cabaret) to the latest on stage at the esteemed Goodman Theatre.

4. Because the deals are insane at some of the city's best hotels. So maybe $276 a night at the Four Seasons Chicago isn't everyone's idea of cheap, but that's one of the highest rates you'll find in town on some winter weekends – and it's a steal, all things considered. Looking for something more modest? Across the street, the classic but highly-rated Talbott was recently running rates around $120 a night, while in opposite directions on Rush Street, you could choose from the popular Thompson Chicago for around $160, or the soaring Sofitel from $125. And that's just one (rather classy) corner of town, where the Magnificent Mile blends into the Gold Coast – you can do even better down in the Loop, though be aware of how dead things can get at night – far too early for our tastes.

5. Because there's so much great art indoors, you won't even notice the weather. You've got at least a year's worth of museums to visit here, but some of the best ones will cost a pretty penny. Then again, two of the most uniquely Chicago institutions – the Chicago Cultural Center, with its free-wheeling, ever-evolving exhibition calendar and the charming National Museum of Mexican Art – are always free. Both should be on any art lovers' itinerary. If you have to choose one of the expensive museums, make it the Art Institute of Chicago, where adults pay $25. Family in tow? Sign up for the $95 base membership, which admits two adults and all children under 18 for the next year. Among other things, members are granted access to a stylish VIP lounge with free coffee, tea and comfy couches – there's a bar as well. For more affordable entertainment, don't overlook the art museums at local universities – the Loyola University Museum of Art on the North Side offers free entry every Tuesday, while the Block Museum on Northwestern's lakefront campus in Evanston (accessible via the 'L') never charges admission

Here's a look at the latest low fares to both Chicago O'Hare (ORD) and Chicago Midway (MDW) from all over the US and Canada.