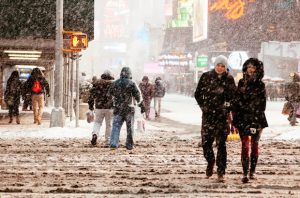 Want New York All to Yourself? Visit in January!

The tree is gone, the lights are down, the window displays packed up for the year – say goodbye to the cute, festive New York that makes December's dark days feel almost cozy. Instead, say hello now to January. (Brrrrr.) The chilliest month of the year around these parts, there's nothing cute or festive or cozy about this New York – it's just a giant, frigid slush farm full of people shuffling back and forth to and from work, waiting impatiently for spring – that or their next weekend in the Caribbean.

There's an upside to all this, and you've probably already guessed what that is: The tourist hordes are gone. Well, mostly – bargain hunters (and tourists who don't enjoy the presence of other tourists) have treasured January as one of the best times to visit New York City, and not just for the extra elbow room – the deals can be amazing, starting with hotels, which can be had for almost normal prices. Here, five reasons to plan an affordable quick getaway right about…now.

1. In January, can have the museums to yourself. Almost.

The wildly-popular MoMA. The never-ending Metropolitan Museum of Art. The Whitney, newly-relocated to its Renzo Piano-designed home at the foot of High Line Park. Pick one, anyone, choose them all – the usual crowd fatigue is less of a thing now, leaving you with more energy to explore. And with the weather outside probably fairly frightful, where else do you really need to be, right?

2. It's easier to catch a break on Broadway.

Looking for tickets to Hamilton, the smash-hit of 2015? That's a stretch. Lucky for you, there are only 900 (well, close) other shows with seats available. While waiting in line at the TKTS booth in Times Square never goes out of style for those looking to save a bundle – bundle up, you'll catch cold! – it's possible to skip the line entirely, thanks to the annual Broadway Week promotion, featuring 2-for-1 deals on shows like Wicked, Chicago, Allegiance and Kinky Boots from Jan. 19 to Feb. 5. Tickets are available online beginning Jan. 7. Want a peek behind the curtain? At the tail end of the month, BroadwayCon takes the stage, or stages, drawing Broadway lovers from all over for special performances, workshops, meet & greets with top talent and more (Jan 22-24).

3. When it starts snowing, Central Park feels like one of the best places on earth.

No matter what you're doing, no matter where you are in the city, nothing is quite as important as being in Central Park once the snow shows up. From the winding pathways of The Ramble to the sledding hill in the shadow of the Temple of Dendur at the Metropolitan Museum, this is New York very nearly at its most magical. When you can't feel your fingers anymore, sneak into to Fifth Avenue's civilized Café Sabarsky, a faithful interpretation of the traditional Viennese coffeehouse. Need something even warmer than a kaffee mit schlag? Get up close and personal with the exotic creatures in the Central Park Zoo's steamy Tropic Zone.

Beginning January 18 (and ending February 5), more than 300 restaurants around the city will serve budget-minded diners three-course meals for $25 at lunch at $38 at dinner. This year's list hasn't been published yet, but you won't have much trouble soliciting opinions on which deals are worth your time once it's released – you can typically expect a mix of old standbys (e.g. Barbetta, Mercer Kitchen), as well as a decent selection of newer, hipper entrants (e.g. Little Park, Narcissa).

5. The hotels are crazy cheap.

From Central Park to Battery Park, everything's much more affordable than you'd expect – it's entirely possible to find a really nice room for around $150 per night; those who just want a simple spot to crash will pay even less, with a nice selection mid-priced chain hotel options starting below $100. Don't believe it, need to see it? Fine, go ahead – run a search on Hotelwatchdog. You might be surprised by what you find.

Ready to make the trip? Here's a look at current fares from all over the US and Canada to JFK, LGA, and EWR.