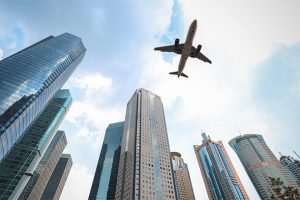 We've scoured destinations and deals for weeks to come up with bargains and overlooked off-peak destinations that are still great in winter. So, whether you're looking for a bucket-list beach destination or just wanting to hit the slopes, we've found some awesome deals both near and far.

Deals mentioned are not guaranteed and all prices are based on research done at the time of publication and are subject to change.

Why It's a Steal: There's nothing quite like Christmas in the Big Apple. While hotel rates drop significantly after New Year's, you should still be able to find slashed rates compared to summer during the holidays and just before. Looking for even better prices? Average nightly hotel rates from January through March hover around $235 a night—22 percent lower than the rest of the year.

If you're going, check out the Unlock NYC campaign "Find a Winter Less Ordinary," which features tips for discovering unexpected icons and landmarks.

Deals to Watch For: We found this hotel deal with Kimpton Hotels with prices at $170 a night from January through March 21 2016. If you're too late on that deal, check out Hotel Week New York City from January 3 to 15, during which rooms are significantly discounted. Be sure to check out NYC Restaurant Week (January 18 through February 5), which offers three-course lunches for $25 and dinners for $38. Other deals include two-for-one theatre tickets on select shows during NYC Broadway WeekSM (January 19 through February 5) and NYC Off-Broadway WeekSM (February 1 through 14).

Why It's a Steal: Although in its peak season, flights to Australia are some of the cheapest we've seen. A strong American dollar also makes your stay there more affordable, so if Oz is on your bucket list, this is the time to do it right.

Flights are inexpensive in part because American Airlines launches daily service from LA to Sydney on December 17, and San Francisco via Qantas on December 20. These are the lowest fares we've seen in a while, according to SmarterTravel Deals Editor Patricia Magaña. This is also Sydney's summer, when amazing weather (little humidity, lots of sunshine) makes it a great escape from the traditional holidays, and get the extra treat of beautiful New Year's fireworks. Domestic travel within Australia is inexpensive with Jetstar making a multi-destination vacation affordable. Don't miss Australia Day at the end of January and Mardi Gras in February.

Deals to Watch For: Round trip flights with flexible dates from Qantas between LAX and Sydney can be found for under $1,300 in December, February, and March.

Hotels average around $200 or $300 per night, and Qantas offers point deals when you book through the airline. Adina Apartments are abundant in the city, with affordable rates and special offers for winter travel. Check out the 4-Day Sydney Discovery deal with Qantas for a harbor-view vacation by boat.

Why It's a Steal: December is a semi-popular time to visit before the busy spring season, but hotel deals and flights can still be found through February and early March, making the warm temperatures and attractive price a great winter escape. Most beaches have free access and hotel deals can be found through promotions either just before or just after the holidays. The closest major airport to Tulum is Cancun (about a two-hour drive), so you're likely to find a cheap flight to the major airport, but also a secluded beach vacation.

Deals to Watch For: Frontier, Spirit, and United all are offering cheap round-trip tickets from major U.S. cities. For hotels, we found lots of pre and post holiday promotions. Check out Diamante K and Posada Yum Kin's ongoing discounted rates.

Why It's a Steal: Both San Diego and Los Angeles are in their quieter tourism seasons, so you'll find slashed hotel prices but can still enjoy the warm weather. It's also whale-watching season in San Diego with lots of discounts to spot them. Hit both for a mini-road trip vacation (driving, you can get between the two cities in about two hours if you time it right). It's also a quick and inexpensive flight.

Deals to Watch For: We found inexpensive flights to both L.A. and San Diego outside of holiday travel days December through February from the East Coast for under $500 round-trip. Check out JetBlue's deals from Boston to Los Angeles for extra savings.

Save 15 percent for fall and winter stays through 2015 with Starwood Hotels & Resorts. Other major hotel chains are also offering deals for both San Diego and Los Angeles through winter.

Why It's a Steal: If you're craving an island getaway, popular—but never over-crowded compared to more popular Caribbean destinations—Barbados is your best bet this winter as it is usually one of the pricier islands to get to. A new direct route from Boston on JetBlue, which started November 7, has contributed to decreased flight prices to the island, making it more attainable than ever.

Deals to Watch For: Last minute holiday? There are dozens of pre-Christmas savings on hotels, and even some winter deals, like resort credits at Bouganvillea Beach Resort. Flights are under $200 one-way pre- and post-holidays from the East Coast as well, making Barbados a true go-to beach escape.

RELATED: Escape the Cold at These 5 Caribbean Destinations

Why It's a Steal: Peak season doesn't start until March (when a handful of music festivals kicks off before the heat gets unbearable), so package deals can be found during the winter months, when temperatures remain in the 60s and 70s. Barton Spring Pool stays a solid 68 degrees year round and the city's surrounding golf courses are considerably less crowded. So if you're looking for an urban escape or some time outdoors, Austin makes for a perfect destination.

Deals to Watch For: Hotels are less expensive and encourage travel during the holidays. Flight searches for December, January, and February from most major U.S. cities averaged under $200 round-trip.

Why It's a Steal: Barcelona, Seville, Costa del Sol, Benidorm, and the Canary Islands (where you can still go to the beach), all make great off-season Spanish destinations since the weather is warmer than most of Europe, staying between the 50s and the 70s depending on where you go. Favorable exchange rates and the launch of budget trans-Atlantic routes have made Europe overall, more affordable this winter.

Deals to Watch For: WOW Air offers unbelievably inexpensive flights from the U.S. East Coast to London, and from there, Spain is a short and cheap flight . See holiday package deals from low-cost carriers like easyJet. See flight and hotel package deals from the UK for Benidorm, Barcelona, Gran Canaria, and Lanzarote. Non-budget airlines and hotels will also have significantly lower rates in winter. We found flights from the U.S. Midwest and East Coast round-trip to Barcelona under the $700 mark.

RELATED: Here's How Barcelona Can Turn You Into an Artist

Why It's a Steal: Celebrate winter in full swing in British Colombia's Vancouver. City hotel rates are low for non-skiers looking to enjoy an urban winter, and with extremely favorable exchange rates, Canada is more affordable than ever. Less than an hour and a half away, you'll find Whistler Mountain with hotels offering tons of package deals perfect for family getaways and a West Coast ski vacation. Don't miss Dine Out Vancouver between January 15 and 31 for a culinary showcase of the city.

Deals to Watch For: Flights from West Coast are extremely cheap (under $200 round-trip) on Air Canada throughout winter, and can be found for under $500 from the Midwest and East Coast in January and February. Take off 20 percent at the Four Seasons and scour other hotel deals.

Why It's a Steal: Colombia in general is a great budget destination and in particular during the winter months when the weather is warm and mood is festive. High season ends in mid-January, so hotel rates (which are already affordable) will be even less expensive.

Deals to Watch For: Flights searched in January and February showed round-trip airfares under $500 departing from most major U.S. cities with connections in Bogota or direct from Miami. Hotel rates in high season average under $200 for a very comfortable hotel, with deals often around $100 per night or less after January. Check out some hotel deals here.

RELATED: 10 Reasons Why Colombia Is the Next Mexico

Why It's a Steal: While temperatures are cold in Venice, most tourists stay away, which means you won't need to fight the crowds. Flights and hotel rates are ultra-low, and many locals will tell you Venice is even prettier with the occasional Dolomite snow. Be sure to check out Carnevale di Venezia (January 23 through February 9), which draws crowds during the weekends—the final weekend of the festival is the busiest and most exciting. If you're looking for something fun to do, check it out, as the celebration is one of Europe's most famous carnivals. But if you want to avoid the crowds altogether, go mid-week during this period or simply go before or after the festivities.

Deals to Watch For: It's worth looking at taking a WOW Air flight from the East Coast to London then using an inexpensive carrier to get you to Italy, as you'll need to make a stop anyway. We found flights between London and Venice for under $50 round-trip with Ryanair throughout winter. Searches for non-budget carriers from the East Coast to Venice yielded results under $700 round-trip for the winter months, which is significantly cheaper than during high season, when flights average over $1,000 round trip. Hotel prices for winter for a comfortable hotel average between $100 and $200. Check out some of the city's hotels deals.

RELATED: 10 Things Locals Want You to Know About Venice

Read the original story: Outrageously Affordable Destinations for Winter 2015/2016 by Ashley Rossi, who is a regular contributor to SmarterTravel.