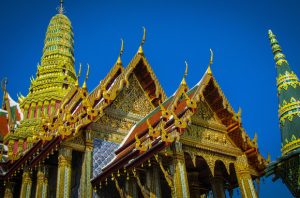 Bangkok for a Bargain: How to Plan Your First Trip to the Thai Capital

Why Go: The people? The best hotel service anywhere? Endless, inexpensive massages? The cuisine? The smiles? The Thai Baht at 3 cents?

If you're reading this, you probably already have some reasons picked out, but what they say about Thailand being the "land of smiles" is not hype. And if you love Thai food ("real" Thai food, not the Americanized versions), super inexpensive massages, vibrant nightlife, and a very favorable exchange rate with the U.S. dollar, Bangkok is bang on. And if you're into being pampered Bangkok is a revelation in value and service (see recommended hotels below).

Best Times to Go: November to the end of February is the coolest period, with January and February the very coolest. April is typically the hottest month.

See our current fares to Bangkok from various U.S. airports

Getting Through the Airport: No visa is required for U.S. citizens. The airport train costs between 80-100 Baht (BHT) and takes about an hour. An airport limo costs about 1050 BHT and a taxi about 400 BHT and takes between 30 and 60 minutes depending on traffic.

Getting Around the City: There are two independent mass transit operators in Bangkok: two lines are managed by the Sky Train, which runs above ground with fares starting at 20 BHT and an underground line with fare based on distance starting at 17 BHT.  A one-day Sky Train pass costs 130 BHT. River buses are an especially enjoyable way to see the city and cost 15-20 BHT per ride. Taxis are inexpensive and plentiful but make sure your taxi is metered before setting off.

Recommended Hotels: You haven't experienced excellence in service until you've stayed in a Bangkok hotel. Calling it "world class" doesn't cut it; it's on a different level. Even the cheaper ones provide customer service that continually pleases and amazes. In the top dozen recommended by TripAdvisor visitors, places to consider include the Eastin Grand Hotel Sathorn, with January rates recently under $100 a night; the InterContinental Bangkok (ideal for fitness fans with its huge gym and large outdoor pool) at $176 per night or less; and the Mandarin Oriental, pricey but wonderful at $500 a night during a recent search.

The rainy (and hotter) season between May and September is when hotels offer their best deals, so you can do even better than the rates quoted here.

Top Eats: There are over 8500 Bangkok restaurants rated on TripAdvisor and new ones pop up every day. So any list will not be comprehensive. But for a truly unique experience, nothing matches Nang Gin Kui, a private dining 15-course set menu feast served in a communal setting for 4-8 people in a chef's home. Just book far in advance of your visit.

Top Things to Experience: If you love cooking in general or Thai cuisine in particular, taking a Thai cooking course makes a worthwhile break from sightseeing. The Blue Elephant Cooking School (it's a popular restaurant as well) is well known and reputable with small classes and morning or afternoon sessions; the Amita Cooking Classes also come highly recommended. Both offer a great meal and perhaps meet fellow travelers with common interests.

No doubt you'll want to visit the temples--The Temple of the Reclining Buddha (Wat Pho) and the Temple of Dawn (Wat Arun) among them—and the Grand Palace. But there are lesser-visited options such as the Arts of the Kingdom Museum which also houses the Ananta Samakhom Throne Hall. Learn about Thai culture and history at the Rattanakosin Exhibition Hall. The exhibits and historical artifacts at the Suan Pakkad Palace are often overlooked by visitors, but its eight traditional Thai houses set in a serene tropical garden with exhibits and historical artifacts, are well worth exploring.

And what would a visit to Bangkok be without indulging in a Thai massage or two or three. The Wat Pho Thai Traditional Massage School offers incredibly inexpensive treatments. And if you want to learn how to give one, this is the place.

Annual Festivals: Two are popular with locals and tourists alike.  The Songkran water festival occurs in mid April each year (appropriately the hottest month typically) and the Loi Krathong candle festival, which is based on the lunar calendar, is usually in the fall (Nov. 25th in 2015). Sponsored by the Bangkok-based Anantara Hotel Group and others, in August the King's Cup Elephant Polo competition is a four-day affair raising funds, providing care, and heightening awareness for and about Thailand's beleaguered elephant population.

Top Things to Buy: The Value Added Tax is just 7%, but many merchants don't participate in VAT refund programs. Bargaining in markets is traditional and many merchants prefer or only accept cash.

Thai silk products, up to and including custom-made dresses and suits made in a matter of days, are popular items. The culinary-inclined often bring back Thai spices, kaffir leaves, condiments, and dried chili that are hard to find or more expensive back home.

Do's and Don'ts: Don't touch heads (it's considered rude), maintain a quiet tone, no shorts for men or bare shoulders for women when visiting temples; keep feet on the floor or pointed downward when in the company of others.  The wai is a more appropriate greeting in some circumstances than a handshake.

Tipping: Tipping isn't widely practiced (taxi drivers don't expect them for instance); but 20-100 BHT per bag for help from porters and hotel staff is appreciated.

Electricity: Voltage is 220, and although most hotels have 120 volt shaver points in bathrooms, they do not work with three-pronged grounded plugs or with appliances requiring a strong current. If your Waterpik or other appliance isn't dual voltage or 220 V you may not be able to use them without a voltage converter.

Useful Apps: Thanarat Menbangphung, Chief Concierge of the Bangkok InterContinental Hotel, suggests Hungry Hub for researching dining options in the city and the Bangkok MRT app (both free) for circumnavigating the city. iPoodThai, a talking phrase book app ($2.99), can be helpful for communicating since English proficiency shouldn't be taken for granted with everyone you meet.

A Postcard Home: 15 baht to the U.S. and Canada