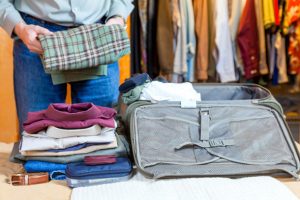 How to Fit More Stuff in Your Suitcase

When it comes to packing, there are two types of people: the rollers and the folders. I've long been Team Rolling, but I recently found myself wondering—does it actually save space?

It's certainly accepted wisdom (both here at SmarterTravel and among other travel experts in general), but I couldn't find any hard data on whether rolling is truly more space-efficient.

So I decided to put it to the test. I pitted folding against two types of rolling, and then threw in a wild card just for fun. Will the results surprise you? It depends on your team.

As my baseline, I filled a carry-on bag to capacity with folded clothes. This is how much a 19-inch rolling carry-on could fit. As you can see, the suitcase is full to the zipper. It's densely packed as well; I used socks to fill spaces and slipped in a stack of tank tops sideways to abide by the folding rule while filling all the available space.

When I started rolling, I realized for the first time that my default technique has evolved into a hybrid fold-roll. I take folded items from the drawer and rather than unfolding them to reroll them (which adds an extra step and more time), I simply roll the folded item. This probably isn't the best for wrinkles, but since rolling is best used on items that don't wrinkle easily (clothing like denim and stretch knits like t-shirts and light sweaters), it's never been a deal breaker.

So before testing the purist rolling technique, I tried my time-saving fold-roll hybrid method. As I tucked the last item into the carry-on, the results were clear: Rolling saves space. Using even this adapted rolling method, I freed up about 10 percent of my suitcase. Happy with this early success, I committed to a true roll—in which I would lay each item flat before folding in the arms of shirts and rolling, and folding pants in half lengthwise and rolling. This method yielded pleasant stripes across the suitcase, and gave me an amount of room similar to the fold-roll technique. If pressed, I'd say the true roll gave me another percent or two of space compared to the fold-roll technique. But it also added at least 10 minutes to my packing time. Packing cubes can be used in conjunction with rolling or folding. They're great for staying organized while traveling, but could they save space in a suitcase as well? I loaded the rolled clothing into packing cubes and arranged them in the suitcase again. The results were similar to folding—the suitcase was full. RELATED: The Best Packing Cubes Ever

Rolling saves space, especially when you approach packing with Tetris-like precision. Packing cubes are fantastic for staying organized, but they don't actually free up space. And folding? Folding can be useful when you're packing items you don't want to wrinkle, but in terms of sheer space-saving, it's no match for the mighty roll.

Read the original story: How to Fit More Stuff in Your Suitcase by Christine Sarkis, who is a regular contributor to SmarterTravel.