Just What's So Special About Those Middle Eastern Airlines?

Those fancy Middle Eastern airlines—Etihad, Emirates, Qatar, and, to a lesser extent, Turkish—have been in the news a lot lately, mostly thanks to the major U.S. and European airlines complaining that they're unfairly subsidized by their governments and expanding like crazy.

Most consumers couldn't care less; they welcome the competition, lower fares, and new planes with exemplary service and products. And while there probably is a case to be made that they are subsidized, rather than open that can of worms, recently I set about exploring what, if anything, sets them apart from their competitors.

Is all the hype—and fear—justified? Are they that much better than Delta, American, United, Lufthansa, Air France/KLM, and the rest?

So I was all ears and eyes on a recent trip to Abu Dhabi on Etihad.

Here are some things I noticed that made me perk up. At check in there was one person in front of me. A uniformed employee approached me and apologized for the "long" wait (I let her know that I had been waiting for all of two minutes). She then informed me that I could upgrade my trip from business to first class for $1000 each way ("That's a bargain compared to what it costs to buy first class otherwise!" she chirped). Once seated, the flight attendants took food and drink orders before take off so they could get us fed sooner. On most airlines, in my experience, this is done after take off, sometimes well after. My young and poised flight attendant repeated my selections back to me to make sure there was no misunderstanding.

Flight attendants approached each passenger and asked if they had flown Etihad before and if not would they like a tour of the seat with its robust massage function, extensive entertainment system, and lighting controls. I was a first timer, so I got the full demonstration. Many airlines leave this to a pamphlet, if they have one at all, in the seat back pocket.

From the cockpit, the moment our departure time had slipped by a few minutes, the captain announced the reason for the delay. "We're waiting for five guests to show up. If they are not here in 10 minutes I will make a further announcement." (The further announcement was not necessary and we were on our way.) Such announcements aren't unheard of, but they're usually not quite as precise as this, and usually they only come after there's been a significant delay, if at all.

Buckled in, I amused myself with a channel on the inflight entertainment that gives passengers a cockpit-eye view of the take off. There's also a camera on the belly of the plane.

Back in economy class, Etihad has added little touches like fixed wings in the seat backs to rest your head on, and neck pillows (as shown in the photo, above) for all passengers in addition to the usual pillows. There are orange-smocked nannies to keep kids entertained with games, puppets and puzzles, three meal choices, free wine, and other niceties.

On the way back to New York, passengers clear U.S. immigration and customs in Abu Dhabi, a perk that some U.S. airline pilots protested against, feeling that gave Etihad another unfair advantage. But on my trip, I barely had time to make the flight since check in lines were long, as was the walk from security and through immigration to the gate. Etihad had to delay the flight a bit until all passengers made it through. And as a result I didn't get to enjoy the lounge.

I flew both ways in business class, and the lie-flat seat was fine for sleeping, but not much different from, say, the business class seats on a new American Airlines 777-300ER. I still prefer the flip-down (rather than the typical "slide down") seats on Singapore Airlines or Virgin Atlantic, since you sleep on one surface and sit on another. 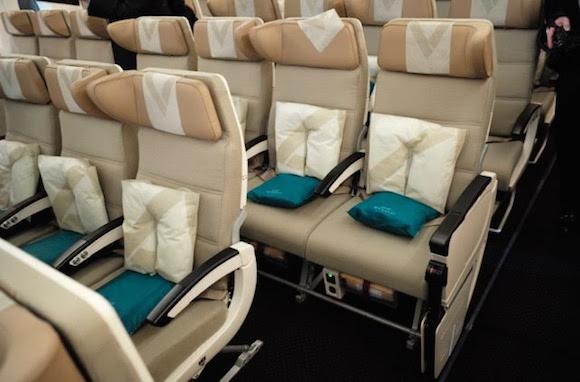 Then I flew to Doha on Qatar Airways, proclaimed as "the world's five-star airline," also in business class.

Again, little touches. The bottled water is Vittel from France, not Disani, filtered from an urban water supply, like you'd get on American. Ground staff dress as smartly as flight attendants, with hats and trim uniforms. Menus are presented in a leather binder. The meal, a braised lamb shank in my case, was worthy of a Michelin star or two, and the lemon tart would make a Parisian pastry chef yellow with envy. The flight attendants were all young and accommodating. The inflight entertainment system was a bit wonky, however, and I had to keep on replaying bits of Sunset Boulevard to move the story forward (how many times can you hear Gloria Swanson announce that it's the pictures that got small?). The real eye-opener, perhaps, was Abu Dhabi's new airport, and the huge, modern, and spacious lounges. They even rival Cathay Pacific's lounges in Hong Kong, and that's saying something.

And let's face it, even in business class, you're still flying in an arid aluminum can. Nothing can be done about that (although Boeing's Dreamliner 787's make an attempt by humidifying the air). And no airplane seat, even the lie-flat ones, will ever be as comfy as a bed at a Motel 6.

So while these airlines do stand out in many departments, perhaps what really scares competitors about them is where they call home. As an executive at Singapore Airlines explained to me, with the retirement of that airline's A340 aircraft, which had specially-modified larger fuel tanks and thus were capable of flying 18 hours nonstop from Newark and LA to Singapore but were uneconomical to operate because of the added weight of the fuel, neither Airbus nor Boeing have planes that can fly between almost any two points on Earth with a single connection. Unless that connection is somewhere in the Middle East. Which is precisely where these airlines maintain their hubs: Doha, Abu Dhabi, and Dubai. They don't call it the Middle East for nothing. Want to fly Miami to Bali with one connection? You have one choice: Qatar Airways.

That's their real competitive advantage, even more than the shiny new planes, exemplary service, and flashy airports and lounges. Other than trying to keep a lid on their expansion through negotiation or legislation, or asking Boeing and Airbus to build longer-range aircraft that are economically feasible to operate, there's nothing, really, that the other airlines can do. It's simple geography.

Have you flown one of these middle eastern carriers? I'd love to know what you think. Should other airlines be worried? Is the competition unfair?