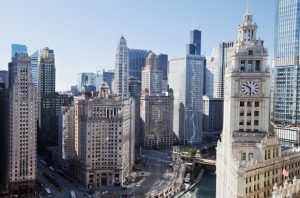 Kick It Old School: A Day in Classic Chicago You Need in Your Life Right Now

Off to Chicago? Don't you dare leave out the good stuff.

Take your morning coffee at The Monadnock

Cool, calm and masculine, this Jackson Boulevard tower designed in two phases by Burnham & Root and Holabird & Roche was the largest office building in the world in its time (the late 1800s) and remains one of the most impressive commercial structures in the United States today. Tucked away in a part of the Loop a lot of visitors never see, the Monadnock's ground-floor, block-long shopping arcade is an old-timey gem, filled with smart shops and anchored by an appealing café belonging to hometown coffee roaster Intelligentsia. (53 W. Jackson Blvd.) Walk out of the Monadnock, head west under the 'L'-tracks on Van Buren Street and you'll find yourself in the middle of a seriously classic Chicago scene – the morning flood of bankers and traders pouring from the suburban rail station, rushing past the donut shops, liquor stores and dimly-lit Italian dives and over to the LaSalle Street financial district. Just over the Chicago River is Lou Mitchell's, one of the Midwest's most iconic breakfast joints. Lou's has hosted presidents, it's on the National Register of Historic Places and they have great waffles and omelets. Oh, and ribs, too, if you're hungry for ribs.  (565 W. Jackson Blvd.) Ride the Green Line to the Garfield Park Conservatory

Ready for a mini-adventure? Walk up Jefferson Street and catch the Green Line 'L' westbound to a part of the city that barely registers with many Chicagoans, let alone tourists. Their loss, because at the helpfully-named Conservatory station, you'll find Garfield Park Conservatory, one of the country's finest glass-walled gardens. Fully recovered from a devastating hailstorm a few years back, prepare to lose track of time in beautifully designed environments ranging from tropical to desert. Don't miss the permanent Dale Chihuly glass installations tucked away in the pretty Persian Pool, just one of the many highlights of this 4.5 acre, indoor-outdoor complex. (300 N. Central Park Ave.) Nibble on a salad at The Walnut Room

It's not Marshall Field's anymore – ugh, Macy's, whatever – but give the new overlords some credit. The 17,000 square-foot dining room at Fields' former State Street flagship lives on, still serving up that famous Walnut Room Salad (the toasted sesame dressing is still a staple in some Chicago households), chicken pot pies based on an 1890 recipe and long (long!) lines during peak shopping periods. The room is remarkable, but it's not all that fancy – come as you are. Fun fact: The Walnut Room was the first restaurant ever opened in a department store, back in 1907. (111 N. State St.) Explore the oldest artist colony in the United States

The Fine Arts Building on Michigan Avenue looks a lot older than its 120+ years and is a marvel on its own, but it gets better – not only was this originally an artist colony, it remains a hive of creativity. Visitors are encouraged to explore the building at will – go ahead, poke your nose in any open doors, who knows what you'll find. Make sure to ride the manually operated elevators, walk the staircases and check out the murals, too. This is one of the last things people expect to find in the money-driven Loop and among the best. (410-418 S. Michigan Ave.) Book a tour with the Chicago Architecture Foundation

There are river cruises and then there is the one you take with the Chicago Architecture Foundation, where they actually know their history and other cool details you won't learn with the other guys. Stop in their busy Michigan Avenue shop to check out your options – regularly scheduled and affordable walks are available as well. Make time for at least one of their tours. (224 S. Michigan Ave.) See the world's largest Tiffany glass dome (and much more)

You could go stand inside the Chicago Cultural Center and stare up at this beauty until your neck hurts and you'd have gotten plenty from your visit to what used to be the city's central public library, but there's so much else going on inside this neo-classical complex dating back to 1897. One of the city's most impressive public spaces, the center buzzes with events and top-notch installations and exhibits. Located just across the street from Millennium Park, it's just one crosswalk away from your selfie-at-The-Bean moment. (78 E. Washington St.) Ask a Chicagoan for directions to Pickwick Lane and they'll likely look at you funny, but it's a real thing, swear – at the end of the impossibly narrow cobbled alleyway is Asado, one of the Loop's most appealing cafés – like most self-respecting Chicago coffee spots, they roast their own. Cookies, scones and tea (for non-coffee-having-weirdos) are also available. (22 E. Jackson Blvd.) Clean up your act at Merz's Apothecary

It's been a staple of the North Side Lincoln Square neighborhood since 1875, but no need for a long 'L' ride. There's an outpost at the equally vintage-y Palmer House hotel, making for a potent one-two punch of old schoolness. Their vast collection of bath, body and skin care product and helpful staff could convert any skeptic – men will feel right at home. Even if you don't need anything, poke your head in for a second – it smells really good. (17 E. Monroe St.) Cocktails at The Drake

A delightful relic at the top of the flashy Mag Mile, the Drake hasn't quite lived up to its potential in decades now, but it's still here and, in small doses, it can be terrific. Choose from a handful of bars at which to sip a classic cocktail and engage in some serious study of the Gold Coast neighborhood and the people who live there, but the Coq d'Or is a piece of history within a piece of history – it's been open since the end of Prohibition. (140 E. Walton Pl.) Two of Chicago's favorite things – giant hunks of red meat and large helpings of serviceable Italian-American cooking – come together for your dining pleasure under one, wonderful roof. You might find more life-changing meat at other, smarter steakhouses around town, but you won't find the ambience, the white-apron service and the all-around atmosphere of this River North classic, now in business for roughly 75 years. It's magic. (500 N. Franklin St.)