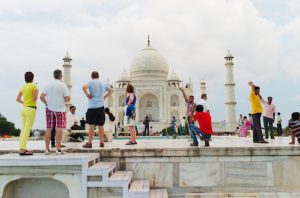 15 of the Most Hilarious (and Insane) TripAdvisor Reviews of All Time, Ever

With more than 200 million traveler reviews and counting, TripAdvisor is more vibrant than ever these days, offering up a continuous stream of new hotel, restaurant and attraction reviews from Anchorage to Auckland and nearly everywhere in between.

But the site isn't just useful for those trying to book trips to unknown locations. It's also – somewhat secretly – a terrific source of entertainment. From hilarious one-star reviews of the Taj Mahal to hair-raising tales of woe from one-star hotels the site's users experienced so we don't have to, here are some of the most unexpected, hilarious (or just plain hair-raising) TripAdvisor reviews of all time.

1. The British Museum had lost its charm…

Seriously, Rosetta Stone. When you just lie there like that, it's really hard for people to get excited.

2. Do we need to review the definition of the word "park" one more time?

This guy just flat out didn't care for Central Park. Not to be know-it-alls, but a quick search for "Central Park Helicopter Tour" returns upwards of 6 million results, #justsaying. 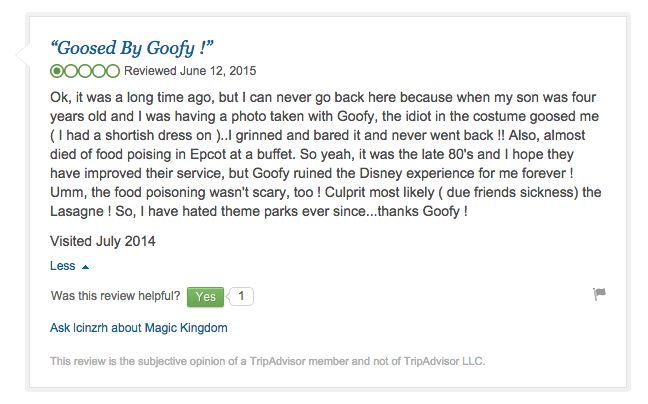 So not appropriate in the workplace, Goofy! This Swiss visitor to the Magic Kingdom has not-so-fond memories of her visit to Disney's Magic Kingdom in Orlando. (And did she really mean to say she "bared" it? Or was something lost in translation?) Also – does anyone remember which Epcot buffet might have been doing lasagna in the 1980s, so we can go back in time and not eat it?

Dancing! Music! In Las Vegas? What are the, errr, odds? The TripAdvisor pages for Las Vegas hotels are riddled with reviews like this one from the Wynn resort. It really doesn't matter what hotels promise or how many stars they've been awarded. The fact is, if you're in Las Vegas looking for a night of uninterrupted sleep, you're better off avoiding the Strip, particularly on a weekend.

5. Can you imagine the waiters at Peter Luger clapping their hands and singing "Happy Birthday" to tourists from Indiana? Us neither. 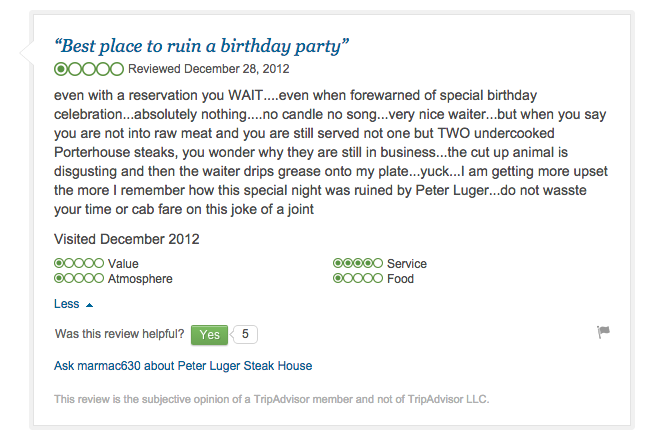 This poor visitor from the heartland wasn't pleased with the complimentary birthday offerings (of which there are none) at one of the most notoriously brusque restaurants in New York City – Peter Luger in Brooklyn. And then there's the trauma of experiencing steak being served…correctly…in a steakhouse…. We just can't.

6. Soooo…kind of like how the Pyramids are just pyramids? 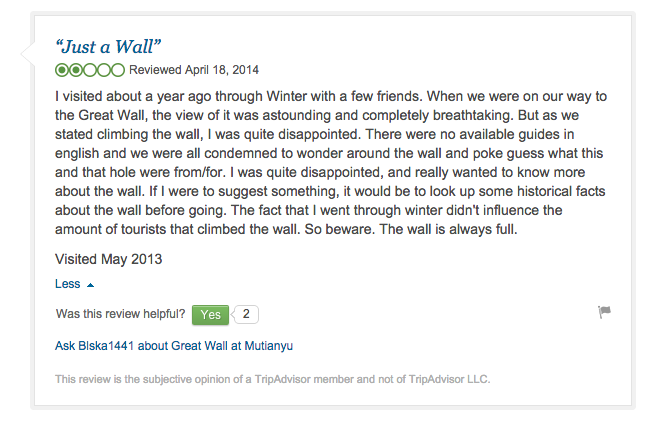 But it all started out so well! Seriously – we're terribly sorry that you found one of the most popular tourist attractions in the world to be a little crowded. Wonder what this user's take would be on Times Square.

7. I'm sure Anne Frank found it claustrophobic as well, dear.

Let's see – house museum where girl hid in wall to escape detection by the Nazis makes visitor feel "claustrofobic." Have we got that right? Can't make this stuff up! 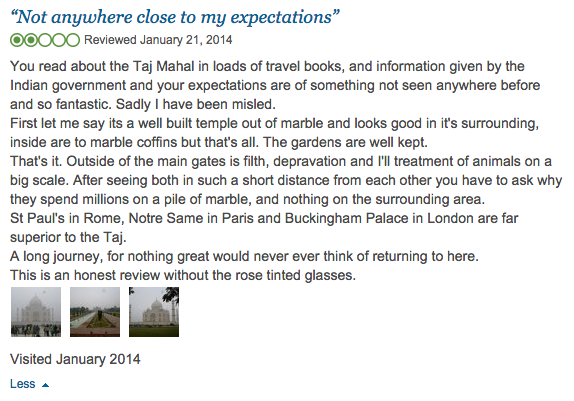 A shame, really, when a wonder of the world doesn't live up to the expectations of the odd tourist visiting from overseas. Also, like many visitors, this user found the location of the Taj rather distasteful, as if it was the Taj's fault that the city of Agra might have seen better days. This review left out one of our other favorite gripes about the Taj: That the inside is dark, creepy and somewhat less grand than the exterior would suggest. Befitting of a mausoleum, perhaps?

9. At least the water wasn't too watery?

This gentleman is clearly a fan of handing out compliment sandwiches, though to be fair, he may be a little murky on what the whole beach experience entails. Keep being you, beautiful beach in Guam we'd like to visit some day – even if you are too sandy.

10. You know how in France, the French people refuse to stop speaking French? Rude. 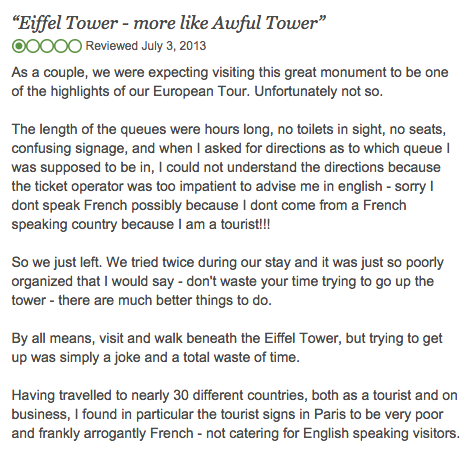 First of all, random Australian person? Best. Title. Ever. Second of all, it's not everyone in Paris' job to cater to your inability to speak a lick of French. Lastly: It's actually not poorly organized. The queues are quite well marked. No language skills required. Perhaps a sit down with your ophthalmologist is in order?

11. The Hilarious Hotel Manager and The Case of the Missing Toilet 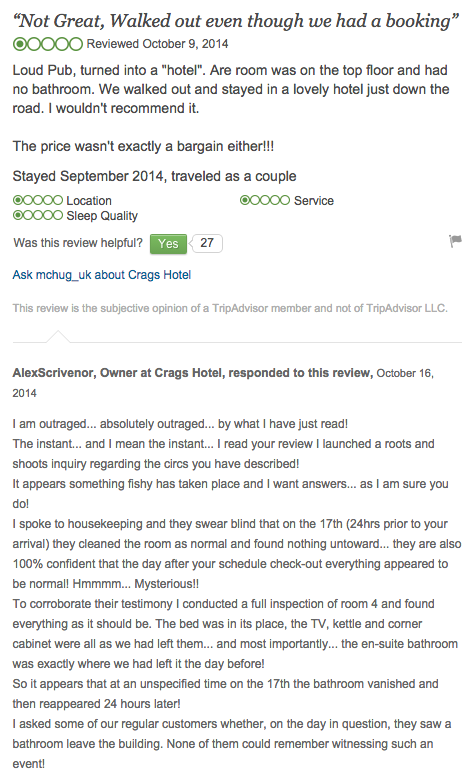 Sometimes, the best response to a bad review is humor – and lots of it. One hotel manager in Scotland became a minor celebrity for his stinging rebuke to this off-handed review left by some visitors from Dubai. Read the complete response – complete with hilarious twist near the end – here.

12. Any one looking to bring home scabies from their next South Beach vacation? This user can recommend the perfect place. 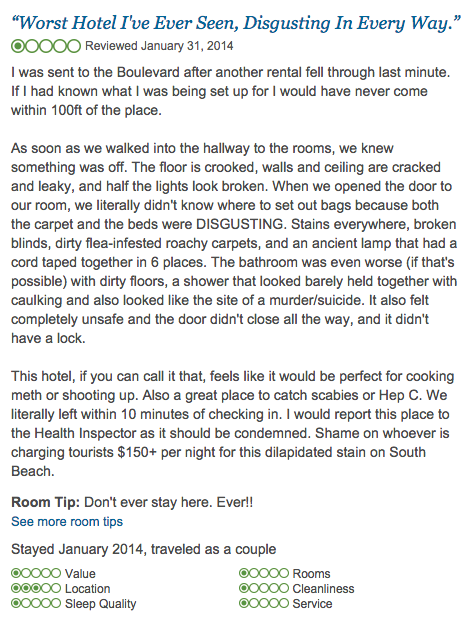 With just one and a half stars and dozens of hair-raising reviews, it's a miracle that the Boulevard Hotel on Ocean Drive in Miami Beach manages to stay in business. It's a safe bet that its customers aren't reading reviews like this one. As the user suggests, it may be best left to those a) committing murder/suicides, b) manufacturing and/or doing illegal drugs or c) looking to catch communicable diseases.

13. The dinner comes to $800 a head, but we'll throw in generous portions of condescension (with a side of crazy) for free – how's that sound? 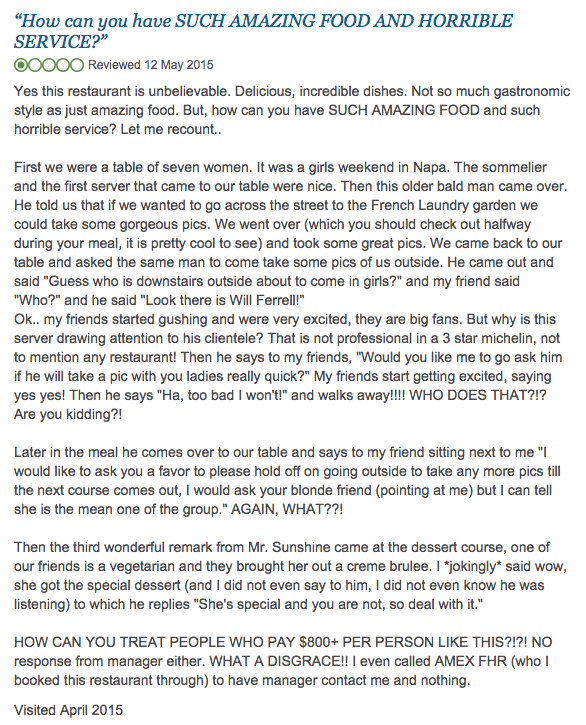 A server at the venerable French Laundry in the Napa Valley allegedly seems to have had it out for this girlfriend getaway group from Southern California. Their apparent mistake? Being entirely too enthusiastic about their once-in-a-lifetime dinner at one of the world's most talked-about restaurants. If true, this is…this is just sad.

14. His name was Basil and the hotel was Fawlty Towers, but your point is well taken. 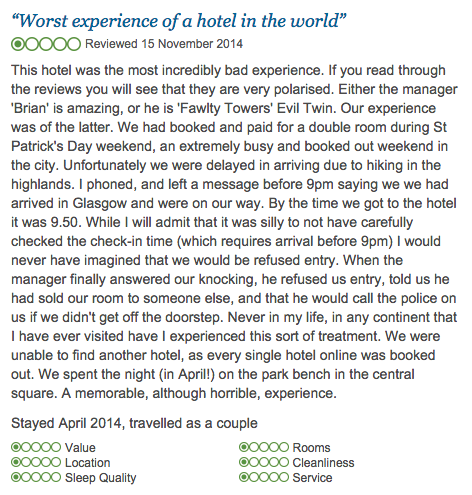 Normally, we'd be inclined to take a review like this one with a coarse grain of  artisanal sea salt, but then again, the Georgian House hotel in Glasgow, Scotland has in the past been somewhat of a shenanigans magnet. After all, a manager here was let go last year for leaving angry replies to reviews from less than happy guests, of which there appear to be quite a few. At the very least, these poor travelers had some experience with the great outdoors, having just come from hiking in the Highlands. Hope the park bench was at least somewhat comfortable. 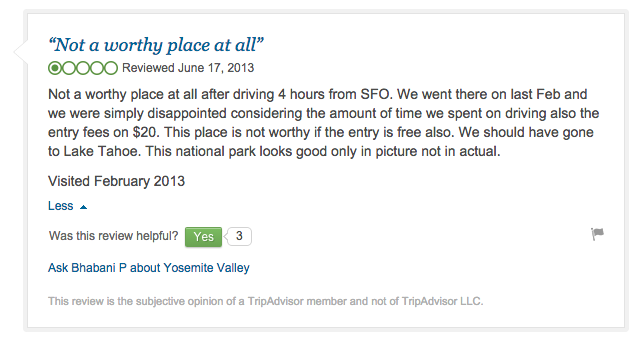 Wait – what? Is this guy serious? Who drives into Yosemite National Park and isn't completely floored by the beauty of their surroundings? Even after a four-hour drive? This user from Phoenix, visiting back in 2013. Hopefully, by now, they've seen a shrink about getting that fixed. Whatever that is.