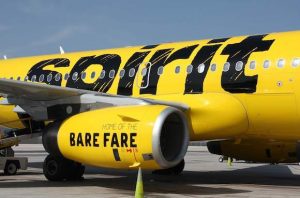 If You're Still Grumbling about Spirit Airlines, You're Probably Doing It Wrong

Each time I read an article excoriating Spirit Airlines for being, well, itself, I find myself somewhat perplexed. Spirit, after all, has always been fairly upfront with customers regarding the services it does or does not provide. These days, they're more upfront than ever, thanks to a clever branding campaign that leaves little to the prospective consumer's imagination.

Just to see if I was perhaps missing something, I hopped on board another Spirit flight – just a short one, from San Diego to Las Vegas. I paid about half of what Southwest (my airline of choice) was asking. For a very small upcharge, I booked the Big Front Seat and held my breath, waiting for everything to be terrible. Except that the flight went off without a hitch, my fellow travelers didn't revolt and the flight attendants were perfectly polite. The most remarkable thing about the entire experience was just how unremarkable it was.

To be entirely fair, the Spirit experience can be a little, well, dispiriting. Particularly if you don't know what you're getting into. It can also be far more expensive than you were expecting. However, once again, no other North American airline is quite so crystal clear on the subject of what it can and cannot do for its customers and how much everything will cost.

If you're mad at Spirit, chances are you did it wrong. Let's make sure that never happens again, shall we? Here are 11 things you need to know before you so much as Google "Spirit Airlines," let alone hop on board.

Let's use San Diego to Las Vegas an example. At the peak of summer, Spirit wants $41 each way. Southwest wants $79. Virgin America $84 and then it climbs from there. If you're smart about it – keep reading – you will save a lot of money flying with Spirit. There's little doubt about that.

2. Contain your excitement. Those cheap fares are unbundled like you've never seen before.

That low fare is just a jumping off point. At least the airline hopes so. Everything besides a seat (unassigned) and a small carry-on bag under the seat in front of you is extra. The only assumption you should make is that besides these two things, you are paying. Up to $50 for an advance seat assignment. Up to $100 for a bag at the gate or $10 to have a boarding pass printed by an agent at the airport. Be aware. Very, very aware.

For $59.95 your first year and $69.95 after that, members receive lower fares, exclusive deals and reduced fees. Everyone traveling on your itinerary benefits. For frequent fliers, it's a great value, regardless of what you've heard. Sign up for Spirit's World MasterCard and put that fee (charged after the first year of membership) towards even greater benefits.

4. Spirit's famed $9 Fare Club is also not for everyone.

Did you get a Costco membership that one Sunday afternoon and then forget to shop there? If you're that kind of person or if you're only going to fly Spirit once in a while, you hate annual fees and forget to cancel things that carry annual fees, this really isn't the club for you and that's okay. There are other clubs.

5. Never leave your luggage to chance.

Never. Ever. So: good news and bad news, regarding those bags. If you plan ahead, you'll pay $35 for a carry-on in the overhead bin and $30 to check the first bag. (They really want you to check, not carry on.) The longer you wait, the more the cost climbs, up to $100 per bag – any bag – at the gate. Don't try to sneak something under the seat in front of you that really won't fit there. They'll make you check it. You have been warned. Play by the rules, however, and you'll find that it's all rather reasonable.

6. Always do a cost comparison between your fare + baggage fees (and other fees you don't think you'll be able to avoid) and other airlines that charge less or nothing for bags.

For example, if I were flying to Las Vegas with a checked bag, my $41 fare climbs to $71. That's $8 cheaper than Southwest's $79 fare; with them, you get your snacks, television on your phone or tablet, a free carry-on bag and two free checked bags. There's no question who offers the better deal now.

7. Spirit – repeat this, over and over again – is best for short trips where you'll only be bringing a small bag that can fit under your seat.

For short, cheap hops without a lot of luggage, Spirit is terrific. If it fits in the 16 x 14 x 12 space under the seat in front of you, congratulations, you are officially beating the system. For everything else, Spirit can bet problematic. Weekends away (often on a whim, fares can stay quite low until close to travel, depending on the time of year) with a backpack? Perfect. Family trip to Florida? Not so much. Not at all, generally speaking – for roughly what you end up paying, other airlines offer better value. It's that simple.

8. If you really need an assigned seat, buy a Big Front Seat.

Or, just buy a Big Front Seat anyway. Many airlines now charge for seat selection, so it's unclear why people still get angry at Spirit for doing the same thing. Put your money toward something better than the usual cramped spot back in coach, though – Spirit's Big Front Seat product (a row of larger, comfier seats with a relatively generous 36" pitch at the front of the plane, starting at $12 per flight) is actually terrific value, when seats are available.

9. If you absolutely must sit together as a group, never leave it to chance.

Family reunion-bound? Spirit makes no guarantees that you'll be able to sit with your tribe unless you reserve a block of seats in advance at a cost ranging from $1 to $50 per seat. Again – price out your options on competing airlines. Spirit may not be the airline for you or for this particular trip.

10. Bring your own snacks, drinks and entertainment.

The first two are available onboard for a fee. The latter is non-existent. Download some episodes of whatever TV show you're currently binge-watching in advance.

So you joined Free Spirit with your first booking and you've finally accrued enough miles for a free flight. Don't ask why, but the airline gives you a very short window to redeem your miles following accrual – 90 days – or they're gone, like that late-night Snapchat you totally wish you could have saved. Then again, if you've become that close with Spirit and aren't reaping the benefits of their World MasterCard – members get to keep their miles – we really need to have a separate talk: A talk about why you're doing so much traveling without a branded credit card, particularly one that offers such significant benefits.