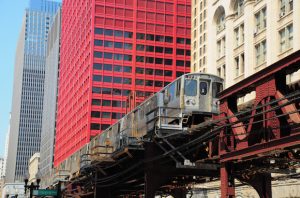 You're Renting a Car at the Airport? Really? 11 Convenient Rail Links You May Be Overlooking!

There's plenty of press about Dulles' never-ending wait for the Silver Line (2018), plenty of people riding JFK's AirTrain, a long-standing tradition of landing at PDX and hopping on to its charming, easy-to-use (if a little pokey) MAX light rail trains. And who could forget Chicago, where the L reaches not one, but two airports. (Two very busy, very crowded airports.) Elsewhere around the country, however, there are plenty of cities that don't get a ton of credit or attention for their airport transit links – some new, some improved, some just quietly at it for decades now. These are often places where you might assume a car is entirely necessary – except that you might be (just maybe!) incorrect. Any of the following airports in your travel plans? Next time, perhaps give transit a go. The Orange Line of the growing Dallas Area Rapid Transit (DART) system opened up last year, making this notoriously remote airport a $2.50 ride from many downtown hotels, where you're a short walk from many local attractions in a city core that's increasingly appealing to pedestrians. Best of all, you can buy tickets on your smartphone via the GoPass app. From both airport terminals, visitors can hop aboard the long-running MetroLink light rail for a one-seat ride to the Gateway Arch, the rest of the downtown area, the Central West End neighborhood, Forest Park and its many attractions and the popular Loop shopping and entertainment area, just steps from Delmar Station. In other words: A lot of St. Louis, at least as far as the casual visitor is concerned. Good logistics are not necessarily the first thing we think of when we think about Miami. And yet, the city has managed to construct a handy intermodal rail hub at its busy airport, offering a connection directly to the Central Terminal via a speedy and free sky train, the MIA Mover. At the station, catch Metrorail to your downtown or Brickell-area hotel, shopping in Merrick Park, the University of Miami campus and beyond. Amtrak will begin serving the station next year. Vastly underrated as a walking city (or as a city, period), there's really no need for a car on a visit to Baltimore. It starts with the $1.60 ride from outside Concourse E into the heart of town on the MTA light rail, continues with the free, clean Charm City Circulator buses that go very nearly everywhere that you'd want to be and wraps with all of those miles of appealing harborfront, not to mention the pedestrian-friendly neighborhoods of Mount Vernon, Federal Hill and more. For everything else – as in so many other cities now – there's UberX. Whether you're doing a quick layover at the Mall of America or a longer stay downtown, the METRO Blue Line – serving both terminals at MSP – can handle the transportation for you with an easy, one-seat ride that costs only $1.75 for most of the day (it bumps up to $2.25 during rush hours). In good weather, you can hop off at 50th Street and explore Minnehaha Park, home to an eponymously named waterfall and the southern terminus of the West River Parkway trail, which winds for nine scenic miles along the Mississippi River and into downtown Minneapolis. Whether you're on a long layover or sticking around for a while, anyone bound for Salt Lake's easily navigable city center need not trouble themselves with renting a car or even hailing a cab – the Utah Transit Authority's TRAX Green Line train begins at the airport and shoots straight to Temple Square and the rest of the downtown area, filled with hotels, shopping and restaurants. Once downtown (and in season – i.e., not the dead of winter), share bikes are available through the Greenbike docking system, taking you anywhere not within comfortable walking distance. Back in the late 1960s, before such things were even a glimmer in the eye of regional planners across the country, The Cleve was on it, launching the country's first rapid transit connection between a U.S. downtown and its airport. From the terminal-adjacent station, the RTA's Red Line all but rockets into town, stopping in the Ohio City district (home to the city's iconic West Side Market) before delivering you to one of the Rust Belt's most appealing downtowns. The fare? $2.25 each way. Many smart (and also budget-minded) travelers have always considered this to be San Francisco's best airport, but with the debut of the AirBART shuttle train that whisks passengers from the terminals to BART's Coliseum Station for $5, the case for Oakland becomes even stronger. If you're headed to downtown Phoenix or the walkable heart of Tempe and don't have a ton of plans to move around the city, skip the dramatically overpriced rental cars at the airport and hop the handy PHX SkyTrain, which connects Terminals 3 and 4 directly to the METRO light rail station at 44th Street. (If you're here on a layover, the terrific Pueblo Grande Museum Archaeological Park is just next door.) From here, the light rail serves a number of strategic locations in Phoenix, Tempe, Mesa and Chandler for just $2 per ride. The station is located in a remote corner of what must be the world's most sprawling airport parking garage and the police force that monitors Sound Transit's light rail link into Downtown Seattle can be obnoxiously aggressive – even with tourists who've never used the system before – but at least you're getting a fairly speedy $3 ride from the terminals to the heart of the city, with stations very close to Pike Place Market, Pioneer Square, the downtown ferry terminal and most of the city's best hotels. As of next year, a station at the heart of Capitol Hill and over by the University of Washington campus will be added to the slowly expanding network. For most visitors to the City of Brotherly Love, a car is a liability, with parking space at a premium in the compact and ped-friendly (and more dynamic than ever) Center City. Not that you need a car when you're here – Philly's transit system may not be iconic or all that inspiring, but it's there and it is vast. Hop aboard the SEPTA Airport Line train, serving 30th Street, Suburban and Jefferson stations. (If you're unfamiliar with Philadelphia, that means most – if not all of – Center City.)