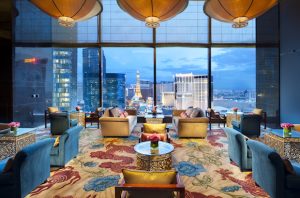 With so many Las Vegas hotels and resorts promising the world – or some tiny version of it, anyway – it can be hard to discern what's real and what's just marketing department smoke-and-mirrors. For those who like to gamble – but not on a good night's sleep – here are the very best hotels in Las Vegas right now. 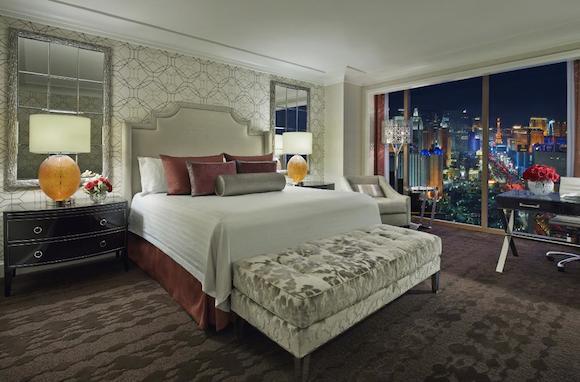 For looks, serenity and generally making you feel like a rock star, it's tough to argue against this 392-room stunner, hanging out 23 floors (and up) above the gargantuan CityCenter development like some kind of sleek drone. Flagged by a brand with a serious reputation for service, the Mandarin is as close as you'll come to true luxury – versus Vegas luxury, which is different – on this patch of desert. The hotel's small collection of bars and restaurants – among them, Pierre Gagnaire's Twist – have their good days and not-so-hot days, and it's still hard to feel quite as cosseted here as you would at a smaller hotel in this class, but a serious and seriously elegant spa, a strict no-smoking policy and a grown-up pool scene manage to make the Mandarin the best choice for civilized adults who want to be in, but perhaps not of Las Vegas. 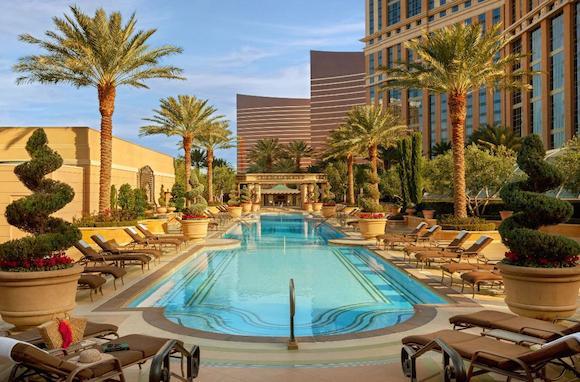 Long before the Mandarin landed in 2009, this charmingly normcore retreat inside the Mandalay Bay metroplex never had very much buzz, which is precisely what makes it such a find. (Even Four Seasons junkies have to sometimes be reminded that such a thing exists in Las Vegas, let alone on the Strip.) There are just 424 rooms (bear in mind, small for around here) and even after recent renovations, the hotel still isn't very flashy or, to some eyes, all that special. Couple that with a remote, southern location and you'll find that the Four Seasons attracts almost none of the looky-loos that parade through resorts up and down the boulevard, leaving guests to enjoy quiet breakfasts on the covered patio at Veranda, treatments in the very good spa and lazy summer days by the diminutive pool. Hotel guests also have access to Mandarin's water park-huge pool complex, out beyond the decorative shrubbery. If you're looking for the classic Vegas mega-resort experience but still prefer to keep it as classy as is possible, it's difficult to think who handles that better for the price than Sheldon Adelson's smart follow-up to his vast Venetian. From the Barney's New York at ground level to reserved, elegant décor in the 3,068 suite-class rooms, which start at 720 square feet (the largest in their class for the Strip), it all feels, well, stylish – even seven years after its debut. (In Vegas, that's plenty of time for things to go terribly wrong.) As at the Venetian, guests may access the Canyon Ranch-managed fitness center, but unlike at the Venetian, Palazzo isn't a confusing warren of passageways and tacked on towers and rage-inducing parking garages. Looking for the gondolas? Palazzo's well-curated collection of boutiques and restaurants blends quite seamlessly into its predecessor, the world-famous and rather more populist Grand Canal Shoppes. Back when it opened, Mandalay Bay's THEHotel was nothing short of revolutionary, unleashing a so-hot-just-then boutique experience on a not-so-hip Strip. Then everything in Las Vegas (and in hotels, generally speaking) suddenly had to be boutique-y and modern and spa-centric and in time, THEHotel found itself trampled underfoot by so many copycatters. Not that it became a particularly bad hotel – it just needed a reboot. Enter Morgans Hotel Group, which had grand designs on the Strip, pre-recession and now finally has a local flagship. If it all feels a bit spare and South Beach-y, that's the point – rooms are now bright and white and simple, the lobby feels more nightclub-esque than before, if that were possible. The pool scene is still more Vegas than Miami, but it works. One of the best things about the hotel in its former life – the Bathhouse Spa – lives on, a gently updated version of its former, seductive self. (The other best thing from before, the rooftop restoclub overseen by French celeb chef Alain Ducasse for many years now, is up for an overhaul and rebranding, with Ducasse still on board. Stay tuned.) 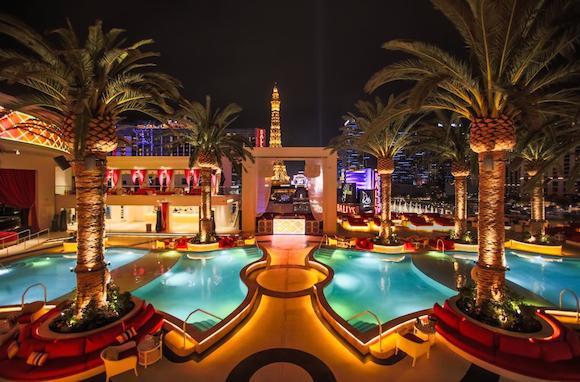 Fully aware of the fact that it's hard for high-rollers to get terribly excited about getting lost in the crowd that checks into the Strip's biggest-name luxury hotels every weekend, resorts along the Strip offer no shortage of ways in which you can – for a steep fee, usually – escape to something slightly more personalized. Likely because it is at the Monte Carlo, this simple but intimate concierge level (named for its position on the 32nd floor) offers fairly attractive rates, allowing even pinchpennies to feel elite for the night. There's a private lounge with breakfast, nibbles and drinks, personalized check-in service and for those who book bigger rooms, limo service from the airport. To boot, you're just upstairs from a recently much-improved resort, offering free monorail service to Bellagio and City Center. There are other, more glamorous options in this category, but for the value-minded, Hotel 32 will do nicely. If you remember this hotel in its former incarnations, you'll likely have a chuckle over the latest rebranding. Admittedly, Caesars did put plenty of effort into renovating and rethinking what was, a few lives ago, the budget Barbary Coast, but short of imploding the building and setting it back more than a few feet from one of the Strip's most insane intersections, this will never be any kind of fancy resort, no way, no how, forget about it. Not that it needs to be – the location and size are actually its two greatest strengths – here, you get a room (nicer than they've ever been), preferably with a view of Bellagio's Lake Como or something like it, a few flights up from the Strip, which is just a short elevator ride away. Quiet? You must be joking – it's either the world outside your window or the thumping rooftop pool & club (Drai's) over your head, take your pick. But if you're after a ringside seat to the action and enjoy a good deal at a hotel that now happens to be quite easy on the eyes, look no further. 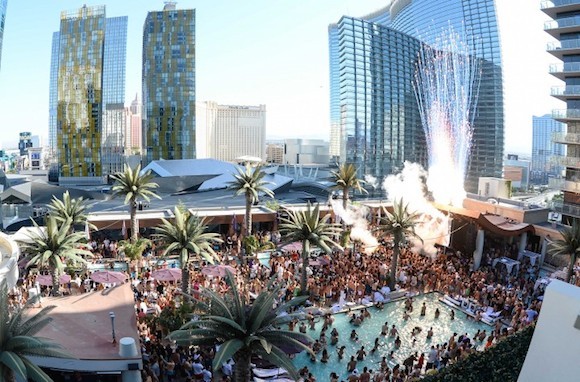 There's no casino, no dining scene to speak of and the pool is just a pool – so why do so many people say they wouldn't stay anywhere else on the Strip? Simple: The cheapest rooms in this 57-story tower, designed by starchitect Rafael Vinoly, are nicely appointed and rather spacious, at nearly 600 square feet. (The best views are past the Cosmopolitan and out to Bellagio's Lake Como.) Like its more glam cousin on the other side of CityCenter, the entire hotel is non-smoking. It may be one (free) monorail stop from Bellagio, but Vdara remains seductively low-key – returning here at night, there's a sense of having escaped the madness that's basically a given from Thursday through Sunday at most hotels, starting with Aria, just across the forecourt. Visiting in warmer weather? No need to stress about pool space – reserve chairs, daybeds and relatively affordable cabanas online, in advance of your stay. 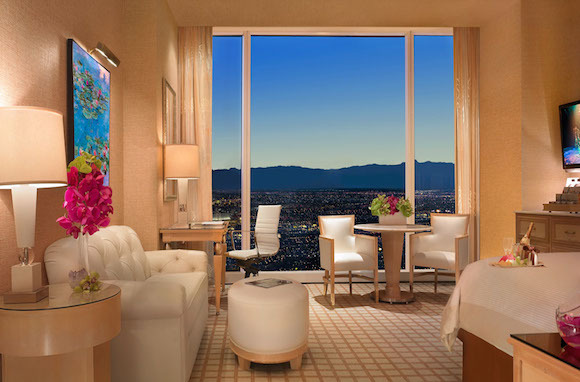 As most big Las Vegas hotel projects do, the Cosmo debuted at the top of the pile. Now, time has passed, ownership has changed, priorities have shifted, purse strings have been tightened, but no matter the shift in its corporate culture, the hotel remains one of the best places to stay in the city based on the rooms alone, which have something that in modern Las Vegas was almost impossible to find: Balconies. Thousands of them, spacious ones, many with stunning views of Bellagio's Lake Como and the Strip beyond. Then there are the in-room kitchenettes, where you can cobble together a quick breakfast in the morning – if you've spent a lot of time in Vegas hotels, you'll appreciate a blast of air coming from somewhere else other than a dusty vent and a free cup of coffee each morning before facing the world down below. Bonus: Best self-parking in the city – you can enter and exit off of Harmon Avenue, which, once you figure it out, allows you to come and go without ever having to cross Las Vegas Boulevard. Now that's a world-class amenity.

Both Wynn and Encore are still powerful lures for dining, daylife/nightlife and shopping, not to mention that otherworldly décor. But as a place to stay, the resort just doesn't feel as essential as it once did, particularly at the prices they often command. Unless, of course, we're talking about the original Tower Suites at Wynn, still one of the best entries in a competitive category. While others are simply content to offer you an escape from crowds and some great views, Wynn spent so much money – as he does – making it all feel far more sumptuous than it needs to be. A private entry and lobby plus the in-tower restaurant, Tableau, make this an almost completely separate hotel, even if – in a concession to changing times – the restaurant is now open to the public. That's okay, your breakfast is comped. Theirs is not.

Here's a look at the latest low fares to Las Vegas LAS from across the US and Canada.