Take It Off! 8 Great Nude Beaches to Visit This Summer

Looking to get the perfect tan this summer? It's suns out, buns out at these great beaches across the United States and Canada where everyday is no-pants day. Nearly five miles long and just fifteen minutes from downtown, this legendary strip of driftwood-lined sand is hidden away at the end of a peninsula, behind the vast University of British Columbia campus. This gives the beach a just-remote-enough feel, leaving the maximum sun seekers feeling even more free to do their thing. Forget the city's reputation for dark, wet and chill – in summer, dry and sunny days are the norm.

How to get there: Park along Marine Drive north of University Boulevard and look for the short trail heading down the wooded bluff to the beach.

For the lowest airfares to Vancouver right now, click here. Tucked inside the vast Torrey Pines State Reserve, Southern California's most famous clothing optional beach is just one feature of this beautiful open space just north of La Jolla. Any San Diego visit should include a hike among the unique pines that grow along the bluffs, followed by a scramble down to the sand for a memorable coastal walk. So large is the reserve, many visitors come and go without ever knowing that more than a mile of its oceanfront real estate is designated clothing optional. That's just how Black's fans like it.

How to get there: There's more than one way to do it, but most climb down the bluffs from the Torrey Pines Gliderport, located behind the Salk Institute on North Torrey Pines Road in La Jolla. Look for the large, unpaved lot next to the Gliderport. One of the most rustic resort towns in Mexico, the erstwhile hippie hangout of Zipolite is barely a bump in the road, with one main road running parallel to a mile-ish-long stretch of sand that faces straight south. Famous for being Mexico's only beach where nudity is officially tolerated, the scene is more low-key than you might imagine; many visitors prefer the more secluded Playa del Amor, a rocky cove not far from the eastern end of the main beach.

How to get there: United Express flies to Huatulco from Houston (IAH) year-round; Zipolite is a 45-minute cab ride from the airport. Multiple connections are available via Mexico City. Officially, the fact that one of Oregon's two state-approved nude beaches ended up at the base of a natural obelisk jutting into the sky and looking kind of like, well, you know, is purely coincidental. Spoiled for choice between the various waterfalls and vista points in the Columbia Gorge, many visitors never make it into the park, which is fine – on sunny afternoons, it's busy enough as is. Follow helpful signs to the correct beach, there are two. One is for people who prefer to keep their bathing suits on.

For the lowest airfares to Portland right now, click here. 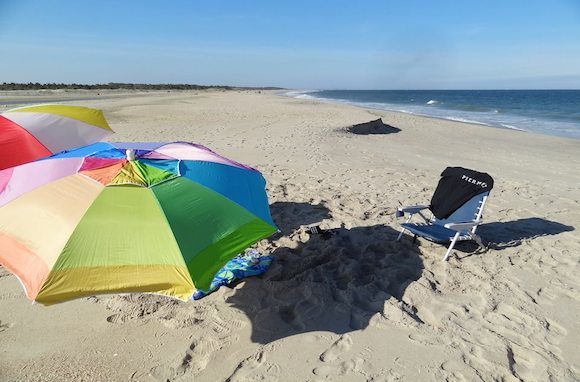 In the wake of an unpopular decision handed down by uptight administrators at the Fire Island National Seashore a couple of seasons ago, this pretty patch of oceanfront, accessible via seasonal ferry from Manhattan, is currently the only official nude beach near New York City. Part of the multi-unit Gateway National Recreation Area (which presumably has more laidback overseers than those in charge on Fire Island), there's plenty of room for everyone here, which is handy, because everyone seems to show up here on summer weekends – all ages and body types; no need to be shy.

How to get there: Starting May 23, Seastreak offers daily trips from East 35th Street and Pier 11 (Wall Street) in Manhattan to the Sandy Hook Lighthouse, an easy walk from Gunnison Beach. The round-trip adult fare is $45 and the trip takes 40 minutes. Sandy Hook is also accessible by car, with a $15 parking fee between Memorial Day and Labor Day.

For the lowest airfares to Newark right now, click here. Traditionally when speaking of this part of the world, the question has been, which beaches aren't clothing optional? Baker's the biggest and best-known in the city, offering a great setting next to the Golden Gate Bridge facing out to the ocean and the Marin Headlands, but safe from the hordes of tourists that descend on the bridge every single day. Fog is typically never far away during the summer months, but when the sun's out, follow your fellow naturists to the north end of the beach.

How to get there: It's easiest to drive – look for signs along Lincoln Boulevard, south of the Golden Gate Bridge – but you can also hop the 38R MUNI bus from Market Street to the corner of Geary & 25th, transferring here to the 29 MUNI bus, which turns around right above the beach. Officially recognized by the city since 2002, this pleasant respite along Lake Ontario is very nearly in the shadow of Toronto's fast-growing downtown skyline. Thanks, however, to an off-road location in the scenic Toronto Islands (you'll have to hop a ferry to get here) Hanlan's Point feels happily removed from the hustle of town, almost like you're on vacation, if only for the afternoon. If you're in the city on a steamy summer day, a trip to the islands is a must, no matter how much you plan to take off (or keep on) once you get there.

How to get there: Ferries depart regularly from Queens Quay, at the foot of Bay Street. As of May 15, the round-trip fare for the short trip will be $7.25 for adults.

For the lowest airfares to Toronto right now, click here. Many beaches are touted as come-one, come-all, but few seem quite so committed to the concept as this lively let-it-all-hang-out spot, just one bridge north of relatively buttoned-down Bal Harbour. Welcoming clothing-averse types from around the globe, Haulover is perhaps the most reliably entertaining beach of its kind on the continent. A fence clearly marks the divide between nude and not-nude sections –most days, you won't have any trouble figuring out which is which.

How to get there: Park in the designated lot ($6) on Collins Avenue between Sunny Isles Beach and Bal Harbour; follow the line of people headed towards the sand.

For the lowest airfares to Miami right now, click here.