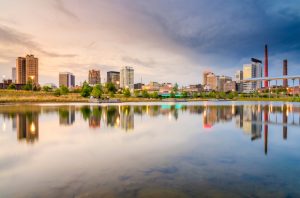 How to Have the Best Day Ever in Birmingham, Alabama

Built on the backs of the cheap labor that manned its mines, and later world-famous as a flash point in the civil rights struggle, the Pittsburgh of the South hasn't always been the cuddliest of cities. For years, it seemed as if the region all but had its back turned on the historic center, growing every which way but in.

Quite suddenly now, Birmingham appears to be on a do-or-die mission to reinvent, this time not running away from its past, but rather building directly on the city's fascinating heritage, in the process becoming one of the most compelling places in the Deep South right now. Here's how you get acquainted. Wake up with coffee at Revelator Coffee Company

Have a seat at the bar and watch talented baristas at work on the shop's custom Slayer machine – if you're not the espresso type, competent pour overs and local pastry should have you feeling right in no time. This is just one in a growing number of small businesses working to make downtown the place to be, rather than avoid. (1826 3rd Avenue North) Do your morning walk at Railroad Park

Something like the city center's front yard, this sculpted, 19-acre oasis isn't just a place to get some exercise or catch some rays, it's a symbol of the local renaissance, drawing curious visitors from around the region. To get there, cross beneath the railroad tracks at 18th Street – just look for the colorful lighting that turned a formerly foreboding underpass into one of the city's favorite works of public art. Artist Bill FitzGibbons' work has been such a hit, it's been expanded and the lights (which at first appear to be neon, but are actually computerized LEDs) now stay on 24/7. (1600 1st Avenue) Past is present at Sloss Furnaces

From vacant towers to silent smokestacks, reminders of Birmingham's heritage are everywhere, but at this National Historic Landmark, where iron was produced for nearly 90 years, the past comes alive with tours, classes (Cast Iron Sculptures for Beginners, anyone?) and popular events – there's also a rotating cast of artists-in-residence. (20 32nd Street North) Play the market at Pepper Place

If you get to choose your first day in Birmingham, make it a Saturday, when the city's best farmers market takes over this warehouse district, centered on a decommissioned Dr. Pepper bottling plant. Sample from a wide selection of local produce and artisanal eats before settling in for espressos at The Red Cat. Here on a quiet day? The neighborhood is known for its collection of design-centric shops - all are worth a browse. (2829 2nd Avenue South) A short drive from the heart of the city, this 62-acre oasis features more than two dozen gardens, scads of original outdoor sculpture and miles of contemplative pathways to explore. The absolute best thing about the gardens, though, besides the 12,000 different plants on view, is that visiting is absolutely free – parking included. Open 365 days a year. (2612 Lane Park Road) Eat your weight in meat at Saw BBQ

Just ten minutes from the gardens, this 'cue spot's reputation stretches far beyond Birmingham. They're growing now, but the Homewood location is where it all began. Get here shortly before they open at 11 o'clock and line up for ribs and/or smoked chicken, served with classic Alabama white sauce. (Recipes vary, but the primary ingredients are generally mayonnaise and vinegar). Save room for macaroni and cheese – banana pudding too, if they have it. Closed Sundays. (1008 Oxmoor Road) Swing through the trees at Red Mountain

Since you're out this way – and since you (hopefully) just ate a whole ton of barbecue, head for this mountaintop park that features 12 miles of hiking and biking trails, a zip line, an adventure course and more, high above the city. No cars allowed – you've got to park and walk to get up to the good stuff. (2011 Frankfurt Drive) Cool off at Steel City Pops

On a hot day in Birmingham, the cure might just be the top-notch pops in a variety of very now flavors (strawberry balsamic, hibiscus, creamy avocado) made from raw, organic cane sugar and other natural ingredients. They're taking Birmingham (and other cities) by storm, but try your first at The Pantry, tucked inside charming Crestline Village. The urban outpost of a local farm, there's a healthy café, a daily farmers market, weekend waffle breakfasts and – most importantly – pops every afternoon, starting at lunchtime. (17 Dexter Avenue) Currently one of the city's coolest addresses, Avondale is just ten minutes and a world away from comparatively dainty Crestline. The section of this one-time company town abutting recently revived Avondale Park, where workers took their leisure during Birmingham's industrial heyday, is home to three of the city's most popular drinking dens. Start with local brews at the Avondale Brewing Company, with its inviting indoor-outdoor setup (201 41st Street South), then stop in for a round at the cheerfully dive-y Parkside Bar – many head straight for the year-round courtyard, complete with fire pit (4036 5th Avenue South). Wrap up the crawl with cocktails and a game of shuffleboard at 41st Street Pub & Aircraft Sales – they're known for their Moscow mules (130 41st Street South). Hungry again? Post Office Pies has pizzas made in wood-fired, custom brick ovens. They are very good. (209 41st Street South). Boules and burgers at Chez Fonfon

With all the recent changes around town, it's hard not to feel as if the Five Points South neighborhood – the University of Alabama Birmingham-adjacent commercial area – might be due for yet another reinvention. Still, credit where due – back when nobody seemed to have a whole lot of faith in Birmingham, there were people like Frank & Pardis Stitt and their trio of neighborhood fine dining establishments. Each restaurant has snapped up its share of awards, but only Chez Fonfon has boules out back. Authentically French but far from stuffy, order what's been referred to as one of the best burgers in the country, made from house-ground meat and topped with nutty Comté cheese ($14.95). The accompanying frites are beyond. (2007 11th Avenue South)

Here's a look at the latest low fares to Birmingham BHM from across the US and Canada.