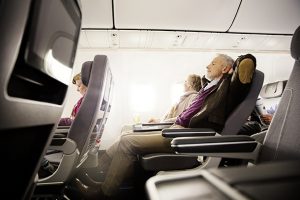 Premium Economy: Is It for You?

You all know why today's economy-class air travel is so lousy: Most travelers will put up with the worst comfort levels and service to knock a few bucks off the price. "You want cheap, we'll give you cheap" is the airlines' response. And the majority of travelers buy into it. Traditionally, if you wanted something better, you moved up to first class (domestic) or business class (intercontinental). But that next step up in comfort and service is a very big step: Domestic first class usually costs at least double the least expensive economy ticket, and intercontinental business class, with its flat-bed seats and elaborate cabin service, can easily top 10 times the economy price.

Clearly, however, some of you—a minority—are willing to pay a bit more for a bit more comfort and service. Many of the world's airlines recognize that potential market and have introduced in-between "premium economy" offerings. Actually airlines have taken two different approaches:

Big European, Asian, and South Pacific lines have opted for what I call "true" premium economy, with eight to 10 (even more on a few lines) extra inches of legroom, seats that are substantially wider, and (usually) improved cabin service, a no-charge checked bag, and other enhancements. Air Canada is the only North American airline to take this path, but the other giant lines have either gone for true premium economy or, as in the case of Emirates and a few others, opted not to offer any premium option at all.

My recent London round-trip on Norwegian was in premium economy. And it was a lot more comfortable than any line's ordinary economy. I actually slept reasonably well, and I didn't have to rub shoulders with anyone else.

Premium-economy pricing is inconsistent: For mid-March, for example, I found round-trip fares from New York to Paris for about $1,050 in regular economy and $1,400 in premium economy, not a huge difference. But from Los Angeles to London, premium fares of about $1,760 are close to double regular economy, at around $950. Premium fares from Los Angeles to Taipei or Tokyo were also about double economy.

So the question arises: Just who is apt to spend $800 to $1,000 for a better seat? Business travelers whose budget or company policy won't let them buy business-class tickets? Probably. Leisure travelers looking to avoid the miseries of long-haul economy flying? Maybe, but mainly when the price difference is small; I suspect not many are willing to pay double airfare for a better seat on a seven-hour flight.

Big U.S. airlines have opted for what I call "semi-premium" economy, with three to four additional inches of front-to-rear space, but with the same extremely narrow seats as regular economy. American, Delta, JetBlue, and United have installed several rows of extra-space seats, and Alaska and Hawaiian designate exit and bulkhead rows as extra space. Some lines offer a few extra perks and enhanced cabin service; others just give you more legroom. Among large overseas airlines, only KLM has adopted this approach. The extra cost is typically less than $100 for a domestic trip and a bit more on intercontinental trips. You get a little improvement for a little extra—a proposition more likely to attract leisure travelers.

My take is this: True premium economy is really a substantially better product than ordinary economy. If you have lots of money, go for it. Otherwise, look for routes and times when the price premium is low enough to make it worthwhile. And consider semi-premium economy just about any time.

This article was originally published by SmarterTravel under the title Premium Economy: Is It for You? Follow Ed Perkins on Google+ or email him at editor@smartertravel.com.