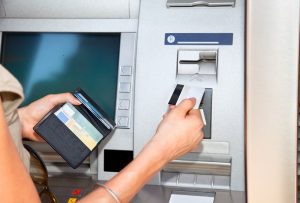 "You don't need to buy foreign currency in advance. The big banks all have ATMs at important gateway airports, so just use your ATM card when you arrive. You won't lose more than about 3 percent in the exchange, and cards from some U.S. issuers impose no foreign exchange fee or ATM fee at all." That's the mantra most travel writers and I have been repeating for years, but now it has to change. You have to revise your on-arrival strategy.

The travel industry hates to see consumers get too many really good deals, and they're shutting the door on good exchange rates at airport ATMs. When I arrived at Gatwick Airport two weeks ago, I no longer saw ATMs operated by Barclay's (my go-to bank in the U.K.) or any of the other worldwide or nationwide banks. Instead, I saw a bunch of ATMs operated by Travelex, with big signs that read, "Free withdrawal." And yes, you can withdraw pounds with no withdrawal fee. But what you do pay is a really bad exchange rate—it looked to me that you'd lose about 10 to 11 percent, the same as you lose at the retail exchange counter. I saw the same system when I departed from Stansted Airport.

A representative of the Civil Aviation Authority, the agency that monitors consumer issues in air travel in Britain, told me that the retail foreign exchange folks have cut deals with airport management to oust the real banks and give retail foreign exchange outfits a monopoly, for which privilege they pay fat fees to the airports. A representative of ABTA, the association of travel agents and tour operators and U.K. equivalent of ASTA, summed it up by saying, "The worst place to exchange currency is at an airport." This consumer issue hasn't loomed large on the British scene because locals can, in fact, withdraw pounds with no fees; the practice hits only visitors.

As far as I can tell, this problem is now widespread in Europe. For other main European gateway airports, the worldwide MasterCard and Visa ATM locators show the only one with big-bank ATMs inside the arrivals hall was Dublin. I found no arrival-hall big-bank ATMs at Amsterdam/Schiphol, Copenhagen/Kastrup, London/Heathrow, Madrid/Barajas, Milan/Malpensa, Paris/De Gaulle, Rome/Fiumichino, or Zurich. Although plentiful, arrival-hall ATMs at these airports were all run by retail foreign exchange outfits. Yes, they may take MasterCard and Visa debit cards, but they'll also take your money. Locators showed lots of legitimate big-bank ATMs near those big airports: Some appear to be within easy walking distance of the airport; others are up to a mile or so away from the terminal.

The implications for travelers are clear: If you don't have enough local cash left over from a previous trip to get to your hotel, you can use your credit or debit card to buy train tickets to the city center, and many taxis now take credit cards. But if, for some reason, you really need cash on arrival, you also have options:

Once settled, you revert to the old rule: Big buys on a credit card, cash from a debit card. That's still relevant.

Beyond the ATM issue, my credit cards are not creating any problems on my current trip. My American Express card, which has a chip, worked seamlessly at every establishment that accepts AmEx. My stripe-only cards worked, as well, but sometimes with a bit more fuss. I have had no occasion to try them in automated systems. Clearly, we'll all be better off next year when most U.S. banks actually issue chip cards.

Will the U.S. Ban Carry-on Bags for Christmas Travel?

The Best Way to Store Your Luggage on a Layover

This article was originally published by SmarterTravel under the title Beware the New Airport ATM Scam. Follow Ed Perkins on Google+ or email him at editor@smartertravel.com.