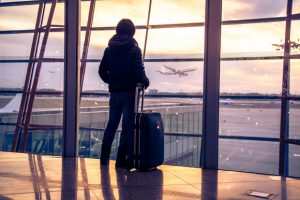 Best Airports to Get Stuck In

It’s fair to say that nobody actually looks forward to a layover. But rising prices make it tough to find an affordable nonstop fare, so layovers are becoming part of a typical travel itinerary. However, it doesn’t have to be such a bummer. There are plenty of airports that offer enjoyable amenities for travelers of all kinds, and we’ve put together a list of our favorites to help guide you through those hours between flights. Best for a Snooze

Minute Suites, located in Hartsfield-Jackson Atlanta International Airport, offers five quiet and private suites for travelers to relax, nap, or work in during their time in the airport. Each suite has a daybed sofa, pillows, and clean blankets to snuggle up in while taking a nap, as well as a sound-neutralizing system to keep things quiet—perfect for the traveler who needs to catch some Z’s during a long layover.

If you don’t want to sleep but still want to relax before taking off, the rooms also have TVs with access to DIRECTV, as well as an Internet connection and the airport’s flight-tracking system, so you can stay on top of any changes to your upcoming flight. What could be better for stress relief than a puppy? After you get through security at Miami International Airport, you’ll be greeted by a fluffy pup who’s ready to put a big smile on your face! A few airports now have this program, but Miami’s only therapy dog, Casey, stole our hearts. Casey, a golden retriever, has her own website and is developing quite a fan base! Best for Being Part of the Action

The pedestrian bridge at Denver International Airport is both functional and inspirational. The bridge spans 345 feet and connects the main airport terminal directly with Concourse A, and travelers standing on it can see planes taxiing beneath them while taking in the beautiful surroundings of the Rocky Mountains to the west and the high plains to the east. In fact, it’s the only passenger bridge in the country where you can watch an airplane taxi beneath your feet! While Chicago O’Hare International Airport does have its own yoga room, we suggest obtaining a day pass to the 8,000-square-foot, on-site Hilton Athletic Club instead, so that you can take advantage of the exercise facilities between flights. The club has plenty to offer—free weights, cardio equipment, a steam room, a sauna, a lap pool, a Jacuzzi, locker rooms—you name it! Plus, the full-service club also throws in some travel-friendly amenities, like an iron and an ironing board.

A regular traveler who is not staying at the hotel can get a day pass for $20, plus tax. If you’re just passing through the airport, but you’re a Hilton HHonors Silver, Gold, or Diamond member, the fee is $15, plus tax. Back in 2012, San Francisco International Airport opened a room in the airport specifically dedicated to yoga—the first airport yoga room in the world! The room was designed to make the traveler’s experience better, and it’s in the perfect spot. Once you’re done waiting in lines and passing through security, decompress at the yoga room, located in Terminal 2. It’s open 24 hours a day, so no matter what time you find yourself needing a breather, the space is there for you to use for free. LaGuardia Airport in New York City hosts Terminal A, which, to this day, is the only active airport terminal that dates back to the first days of passenger travel in the United States. The terminal stands as the original terminal building of LGA. It was first known as the Overseas Terminal, then the Marine Air Terminal, and now Terminal A. The terminal served international flights through the 1940s, and its art deco design will bring any traveler passing through right back to that era. Located in the Imperial Terminal of Los Angeles International Airport, the Flight Path Learning Center & Museum is a great way to spend time during a long layover, and it doesn’t cost a thing! The Flight Path Learning Center is the only aviation museum and research center located at a major U.S. airport. The Learning Center features various exhibits that focus on things like the history of flight and collections of artifacts that highlight airlines, manufacturers, and companies in the industry. It even has a flight-simulator training program, which provides participants with experience and instruction so that they can pursue careers in the field of aviation. Dallas-Fort Worth International Airport has more than 100 options for food and beverages inside the airport terminals and the possibilities speak to tastes of all kinds! Here are some of our favorites: If you’re in the mood for some authentic barbeque grub, check out Cousin’s Bar-B-Q. Want something a little more upscale? Grand Hyatt DFW’s M Lounge has cool cocktails and appetizers. Itching for something from the sea? Swim your way through the crowd and head to Pappadeaux Seafood Kitchen. If you require a glass of vino to relax before your next flight, La Bodega Winery is the place to go. Sometimes a flight layover or delay is long enough that a last-minute hotel booking may be necessary. Dallas Fort-Worth International Airport hosts one of the easiest-to-find and most centrally located airport hotels, The Grand Hyatt Dallas/Fort Worth. You can find it conveniently located inside Terminal D, but it’s tucked away from the commotion of security checkpoints and ticket counters. The hotel has on-site dining options, along with a rooftop pool and spa, an all-hours fitness center, and—our favorite—an espresso bar! When it’s time to prepare for your next flight, you can hop on the complimentary transportation that connects the hotel to the airport. Best for Proximity to the City

Boston Logan International Airport (our hometown hub!) is our top pick for airports closest to a major city. Logan is technically located in East Boston, but it’s less than four miles away from downtown Boston—only about a 10-minute ride in a car or taxi. However, one of the perks of Boston transportation is that there’s a free shuttle bus to the local MBTA public transportation system, where you can access any part of Boston that you’d like to visit. This can be especially helpful during a long layover when you have the time to leave the airport without risking a missed flight. Best to Shop ‘Til You Drop

Portland International Airport has a variety of unique shops, which makes it our favorite place to make between-flight purchases. In the airport, you’ll have your pick of top-notch boutiques, duty-free outlets, and local and regional stores such as Oregon-based Nike. But our favorite shop is Made in Oregon, which stocks all kinds of products made within the state lines, like craft beer, cheese, jam, handmade jewelry and other unique gift items.