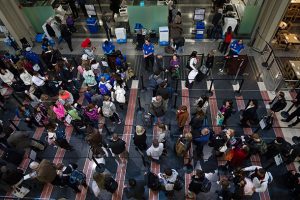 How to Remove Your Name from the No-Fly List

You're about to catch a flight when you get a message to "see agent," in place of a boarding pass. That agent says you can't get on your flight. Congratulations! You're on the Department of Homeland Security's (DHS) No-Fly List. Although this unhappy event doesn't occur often, it's devastating when it does.

Presumably, if you're a terrorist or intend harm to the country, you already know why the government listed you. But government lists have been known to contain errors. People sometimes get on the No-Fly List without any apparent cause—and without knowing why. That's why a group of travelers recently sued the government, charging lack of due process, with legal support from the ACLU. A federal judge in Portland, OR agreed, ruling that an inability to challenge the list in any meaningful way is unconstitutional. (Several other similar cases are in the pipeline.) In response, the DHS says it plans to change the system within the next six months.

Actually, DHS maintains more than one list. People on one No-Fly List won't get on a flight, period. People on another list can fly, but with additional airport screening. Both lists are completely opaque. For starters, you can't log onto a DHS website and check to see if you're on a list or why you're on that list. The DHS specifically states, "Please note that the Department of Homeland Security (DHS) can neither confirm nor deny whether an individual is on the watch lists because this information is derived from classified and sensitive law enforcement and intelligence information." All DHS will say is that, last year, some 48,000 travelers were banned from traveling.

The only way you can find out that you're on the No-Fly List is to be unable to print a boarding pass at home or to be refused boarding when you try to catch a flight. A website purporting to post the no-fly list calls itself the Terrorist Security Administration: It's what you get when you Google "no-fly list," but it's a fake. It may be an accurate hack, it may be a scam, or it may be a joke—but it is not official.

DHS implemented an appeals process in 2007, but that process remains Kafkaesque. DHS calls its system "DHS Travelers Redress Inquiry Program," or DHS-TRIP (clever, those bureaucrats), and you start the process by logging on to the DHS-TRIP website. There, you fill a complaint form and apply for redress online. You will need, at a minimum, a passport or the equivalent photo ID required to board a flight. E-mail the completed form and scanned copies of required ID documents to the DHS, or do the whole deal by mail. In due time, the DHS will either bounce your appeal immediately or issue you a "redress control number," which you use initially to track your application and later as a supplementary ID when you make a flight reservation.

In the end, the DHS may or may not resolve your issue. Presumably, if the problem is something simple like a mix-up in names or an incorrect number somewhere, you will be allowed to fly. But the procedure remains opaque. The DHS will not tell you why your name was on the list or how it got there. It will only tell you, if successful, you're OK to fly.

Whatever revisions may come, the result will have to be better than the present system. But how much better remains a question.

2 Controversial Ways to Get Big Discounts on Airfare

Airline to Perfume Its Planes

This article was originally published by SmarterTravel under the title New Rules Allow You to Remove Your Name from the No-Fly List.