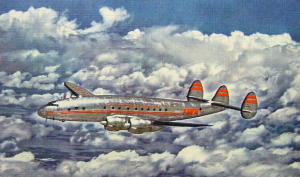 9 Ways Air Travel Is Better Than It's Ever Been

If I read one more article about how awful air travel is today compared to the "golden days of air travel" my head is going to explode. I'm as nostalgic as the next guy, and would pay anything to take one last ride in a Lockheed Constellation, but let's face facts.

If I read one more article about how awful air travel is today compared to the "golden days of air travel" my head is going to explode. I'm as nostalgic as the next guy, and would pay anything to take one last ride in a Lockheed Constellation, but let's face facts.

Compared to the days of the "Connie" and Douglas DC-7, and even the Boeing 707, when Pan Am and TWA and Eastern ruled the skies, today's air travel is:

When I took my first transcontinental flight (in a TWA Boeing 707) my parents paid the inflation-adjusted equivalent of about $2000 round-trip. That was the only fare available in 1964, other than first class and maybe a "night" fare. We flew "Y" economy class. There were no discounts, no super savers. The fare was printed on the TWA schedule. It changed maybe a couple of times a year. Flying was a luxury.  Now you can fly New York to LA for $129 each way on a good day. And here's a fact: when we started Airfarewatchdog back in 2005, you could fly from New York to Liberia, Costa Rica for $305 round-trip. Recently, that fare was $288 round-trip. The 707 was a handsome plane but so far, it has been involved in 170 crashes of one kind or another. Compare that to the 777 or any modern jetliner. Air travel is much safer today than in the good old days. New planes are much quieter than those old rumbling Constellations or noisy 707s. You're flying in a much better product. I admit, however, that the seats are getting more cramped, unless you opt for an "economy plus" or "economy comfort" seat. There are power plugs at seats. And WiFi. You can check in online and get flight notifications on your mobile device. In the olden days, entertainment took the form of the flight attendants handing out playing cards with the airline's logo stamped on them. Or a black-and-white TV with one channel. I do miss airline playing cards, but I'd rather have seat back video with hundreds of movies and TV shows. Can you believe that they used to allow smoking on airplanes? They even handed out free cigarettes! Cough, cough. You can book your own travel online, and take control of your travel plans, easily comparing airlines and fares to get the best price, either on your smart phone or computer. No going back and forth with a travel agent (I do love travel agents, however, don't get me wrong). And you can carry on your own bags. Back in the "good old days" there were just hat racks above the seats, so you had no choice but to check your bags. We'd just bring onboard magazines, a coat, medicine and other essentials in one of those airline-logo flight bags, which I still love to collect on eBay. Sure, now there are checked bag fees, but at least you have the choice of not being separated from your luggage if you don't want to be. You can fly to so many more places today, often with just one stop or one connection, than back in the 50's and 60's. Love them or hate them, back in the good old days there was no such thing as a frequent flyer program. Airlines gave stuff away for "free" such as playing cards and meals (actually you paid for these things because they were rolled into the price of your higher airfare), but they didn't give away free flights. Now they do.

True, there were some things about the good old days that were better. The economy class seats were plusher. People were more civil. You could greet people and see them off at the gate. But today, for all its negatives, commercial air travel is a much better product than it was even a few years ago. I'll still be collecting those airline flight bags and other memorabilia. But that's as far as my air travel nostalgia goes. How to Get a Better Seat the Next Time You Fly

Airport Observation Decks around the World