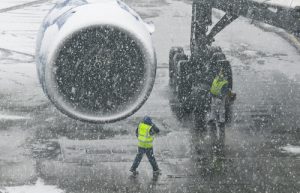 What to do when your flight is canceled

The standard advice is to "call your airline" and check online. Or sign up for text alerts from your airline.

But that doesn't always work.

Yes, you can get a full refund, even on a non-refundable fare, and even if your flight is just severely delayed.

But what if you really need to get there? Or get home?

It's more effective to Tweet your airline, if they're good responders like @AmericanAir and @DeltaAssist. Calling your airline you might be on hold for an hour or more. You can also have your airline call you back. Here's how to do it with United for example.

You can take my recent tale of woe as an example. I was booked on a connecting flight from LaGuardia to LAX leaving this past Thursday morning (Feb. 13). As of Wednesday night, it wasn't canceled. I requested American to text me if the flight was canceled. I didn't receive a text. And even though I was magically anointed an American Airlines "Platinum" frequent flyer thanks to a recent promotion, I wasn't automatically rebooked on another flight of American's choosing. I was pretty much thrown under the plane.

On Wednesday night, it really looked like I'd be canceled, judging by the weather conditions. It also looked like, according to Flightaware.com, that the inbound plane that would be serving my outbound flight had been canceled but that isn't a sure sign that my flight the next morning would be canceled.  I noticed that there were seats on a flight later in the day from JFK to LAX nonstop.  I considered booking a frequent flyer seat (or buying one) on that flight. However, if my flight wasn't canceled I'd be stuck with two seats/fares. Had I been an "Executive Platinum" American frequent flyer member (a very high rank) I could have booked the nonstop and rebanked my miles on the JFK LAX without the usual $150 penalty but I'm just a "platinum"... so I didn't risk it.

As it turns out, I should have because my flight was canceled and that JFK-LAX flight ended up flying. 20/20 hindsight.

So now I'm stuck flying out on Sunday morning Feb. 16 JFK-LAX nonstop (which is better than a connecting flight from LGA-LAX but still).  I rebooked using @AmericanAir on Twitter.  They were very helpful (they could have made me take a less expensive and less desirable connecting flight since that is what I originally bought). As of Thursday morning, there were no seats of any kind between NYC/Newark and the LA area. Everything was booked or canceled.

But during the day on Thursday, seats did open up, a seat here, two seats there, and those flights ended up actually flying later in the day.  By the time I found them and waited for an agent to book, they were gone.

My mistake was not grabbing one of those seats myself on a 24-hour hold, which American allows you to do without payment. Then I could have called American and asked them to re-ticket me, switching my Feb. 16 flight to one available earlier. Unlike other airlines, American doesn't require payment when holding a reservation for 24 hours. That's a big difference.

Or I think I would have had better luck grabbing one of those "whack a mole" seats had I been at the airport, perhaps even if I had taken my original boarding pass to get through security and hung out in the American Airline Admirals Club (where the agents are more helpful and the lines shorter). If I had been really desperate to get home yesterday, it might have been worth a try.

The advice is always "don't go to the airport" but I think if you're desperate, do it.

As I write now at 12:30 a.m. on Friday morning there isn't a single American Airlines seat available NYC-LAX on Feb. 14, and just 5 seats all day in first class the following day, Feb. 15. But it's likely that flights will open up as the day progresses, so there's still hope.

Above Image via Shutterstock