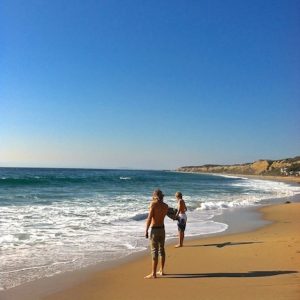 Los Angeles! It is big, weird, crowded and often daunting, particularly if you are only here for a short stay. Still, you don't need a ton of time, or even a car (no, seriously) to get the hang of America's second city. With just 24 hours and a sense of adventure, you can have one of the best days ever, not only in Los Angeles, but anywhere.

1. It all begins at the beach.

It's kind of a thing, here in Southern California. Doesn't matter how, doesn't matter where, just go. (The closest one to LAX is Dockweiler State Beach, four miles from the terminals.)

2. Get relaxed, then take on the town. This is Union Station, LA's historic (and quite handsome) rail hub. Comfortable FlyAway express buses connect the airport and the station 24 hours a day for $7.

3. Cross the street to see the oldest blocks in Los Angeles. On this stretch of Main Street - officially referred to as El Pueblo de Los Angeles Historical Monument - you can catch a glimpse of a very different kind of Los Angeles than the one the world knows today. Containing some of the city's oldest buildings, the local mission church and the kitschy but cute Olvera Street shopping area, the neighborhood is at its best on weekends, when churchgoers, performers, people watchers, old men taking naps and camera-wielding tourists mix it up in the central plaza, which at times feels like it was yoinked straight from a small town in Mexico.

4. Walk a couple of blocks up Broadway for some of the best food in town. Out behind the mission complex, you'll see the giant Chinatown gate, off to the right -- pass through and stroll up to the retro-fab Far East Plaza. Tucked away inside is Chego, Roy Choi's tiny lunch counter, serving food that is a happy hybrid of three of the main culinary influences in LA right now -- Asian, Latino and stoner. From killer burger specials to grilled veggies to intensely good rice bowls, you really can't go wrong. Grand Avenue can seem a bit lonely at first -- sorry in advance, but the walk over here from Chinatown can be a bit windswept and terrible, we are working on this -- but when you climb the stairs into the bouquet of silver petals that comprise Frank Gehry's Disney Hall, you'll be glad you made the trek. There's an elevated walkway that goes around the exterior of the entire building. It's not well marked, but worth finding. In continuous operation since 1917, one of the West's best public markets is like Seattle's Pike Place if Pike Place had never become a tourist attraction. At least for now -- plans to renovate the market are proceeding, meaning that for now, you get everything from legit tacos de cabeza (at Tumbras a Tomas) to some of the city's best hipster coffee (at the super-friendly Glanville & Babinski).

7. Next, ride the subway to a mountain. Did you know that you can do this? Did you know that there was a subway? There is -- almost 100 track miles and many more to come in the future. For just $1.50, you can ride the Red Line subway to Griffith Park, where Mount Hollywood offers some of the most incredible views in the city. Buy a $5 Metro Day Pass from a machine in the train station; you'll put it on your TAP card, which you buy for a buck, also from the machines.

8. First, you ride the train to Hollywood. It only takes a few minutes. Hop on board at Pershing Square -- there's an entrance out the back of the Grand Central Market, on Hill Street -- and jump out at Hollywood & Western for the short walk up Western Avenue, towards all those trees. (Pro tip: Turn right off Western at Franklin Avenue, then take the first left on to Oxford Street and walk a block up to Los Feliz Boulevard. Cross over at the light -- you are now in Griffith Park.)

9. From here, it's an easy hike up to the Griffith Observatory. Not much more than a mile and a half from the train station (sunscreen is a great idea, BTW, so is a bottle of water) and you'll be scoping out the sweet views from the Observatory. Make sure to go inside for a self-guided tour of the excellent exhibits, or to catch the popular show.

10. If you're not already worn out, head up Mount Hollywood. It'll add another three miles or so to your walk, but it's completely worth it. Just walk to the opposite end of the parking lot behind the Observatory and follow all the hikers heading past the metal gate. The 360 degree views of the Los Angeles region from up top are terrific.

11. Head back down and take a much-deserved break at Trails Cafe. The cutest little café of all time award goes to this little spot, tucked inside Griffith Park, opposite where you began the hike up to the Observatory. Head back down the hill and ride the Red Line to Wilshire and Vermont, one of the city's busiest corners. Out on Wilshire, you'll see the stop for the Rapid Bus -- you want Line 720, which will take you Santa Monica. With your TAP card in hand, all this running around is a breeze. 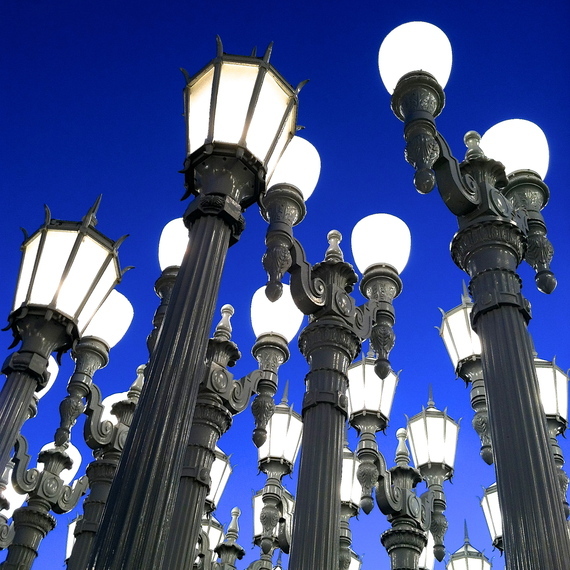 The Los Angeles County Museum of Art isn't just a place to go look at paintings, it's a world unto itself, right off Wilshire Boulevard, featuring great sculpture (you're looking at one of the most famous pieces, Urban Lights, above), multiple buildings, a great restaurant and bar and even a good coffee shop and bakery. Next door, the famous La Brea Tar Pits offer a glimpse of ancient life in the Los Angeles basin.

14. Then, it's back on the bus for a rolling tour of Beverly Hills. 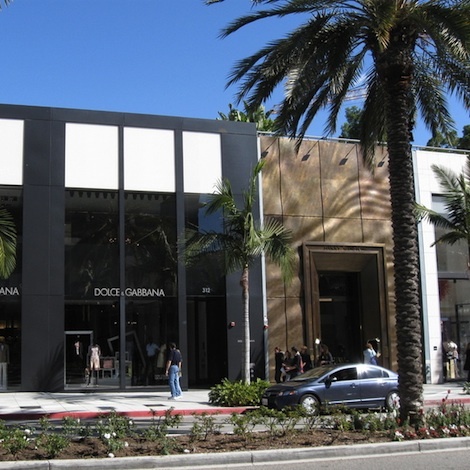 Hello, Rodeo Drive. (Fun fact: We'll probably all be old, but there's going to be a subway station at the corner of Wilshire & Rodeo some day, right next to the "Pretty Woman" hotel, otherwise known as the Regent Beverly Wilshire.) When you can go no further, you're on Ocean Avenue, in the civilized (and very pedestrian-friendly) seaside city of Santa Monica.

16. Every day's pretty great out here by the beach, but Wednesday might be the best days. That's when one of the country's best farmers markets takes over the intersection of Arizona and Second, just off of Ocean. Come early and see some of Los Angeles' top chefs snapping up the good stuff.

17. Walk down to the beach, obviously. The famous pier can wait -- go like a local and grab a table at Back on the Beach, at the totally public Annenberg Beach House. The most pleasant way to do the walk down is to take the stairs at the foot of Montana Avenue. Once you hit the beach path, turn right and you're a short walk away. Renting bikes is a popular option, but walking's great too (and cheaper). 21. Next, get down to Venice, because Venice. The giant skate park is just one piece of the famously odd (and increasingly cool) puzzle that is Venice.

22. Make sure to stroll down Abbot Kinney Boulevard. Between Brooks Avenue and Venice Boulevard, you'll find one of the hippest strips in the entire country and one of the city's most pleasantly walkable areas, an unbroken string of interesting shops and very good restaurants. Hiding between Abbot Kinney and Pacific Avenue, a developer gimmick became a Los Angeles treasure. An stroll along the narrow walkways that tie the area together makes a perfect way to decompress after a busy day.

24. Wherever you end up, stop to admire the sunset. Headed elsewhere? Check out Airfarewatchdog's layover guides to 20 of the most-visited places in the world.

10 great tours you can take on your next layover

Get connected! Your guide to airport wi-fi