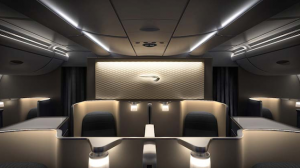 Who's First in First? Better in Business? An Airline Round-Up

Recently, this request from a reader popped into my inbox: “Can you tell me the difference between Business Class and First Class? Please let me know all the differences you can. I am trying to book a flight for a special occasion next year, and I am trying to figure out what is best.”

I put off answering as long as possible, since I could write a book on the topic, it’s so complicated. There’s no such thing as “pure” business class or “pure” first class anymore. Which airlines? Which routes? Which planes? On some airlines, business class is better than first class on other airlines. Some routes (such as New York to LA) have fancier business and first (fully lie-flat beds on some planes) than others. And some airlines (notably, British Airways, Singapore, Etihad, and Emirates) keep on pushing the envelope, making their business and first class cabins a notch above all the rest, so it’s hard to keep up.

So how to tackle this reader’s question?

Luckily, I’ve been flying in business and first a lot this year, or at least taking a peek at some airlines’ new cabins on the ground, so I can speak from experience. Let’s start with fully-lie flat beds. Many airlines still have “angled flat” beds in their premium cabins, in some or all of their planes. It’s not the same thing as fully lie flat. In an angled seat, you’ll end up sliding down the seat at some point, squished at the bottom, and it’s hard to sleep in the fetal position. Then there’s aisle-access for all seats. On some airlines, you have to climb over your seatmate if you don’t have an aisle seat.

And then there’s the issue of flip-down lie flat seats. Some airlines (Singapore and Virgin Atlantic for instance) require passengers to get out of their seats and manually flip down the seat to make it into a lie-flat bed. This allows the seat designer to use fewer motors and thus makes the mechanism less prone to failure (and it saves weight and thus fuel). Most lie-flat seats (such as those on British Airways and American) transition from upright to lie flat at the push of a button.

To find out who offers what kind of seat, head over to Seatguru.com where you’ll find seat maps for most all airlines and aircraft types. But some airlines fly many versions of the same plane, and not all versions are equal. So you have to enter your exact airline and flight number to find out which version you’ll be on, and realize that airlines can switch planes at the last minute, which can be a disappointment.

What’s the difference between business and first?

On some airlines (e.g., Air Canada, Delta, Virgin Atlantic) it’s the same product. They’ve done away with first class on most international routes, and just call the product “BusinessFirst” or in the case of Virgin Atlantic, “Upper Class.” In many cases on these airlines, you’ll get a fully lie flat bed, often with full aisle access for all seats.

Where business and first still co-exist, the main differences are bigger seats, better food and wine, more flight attendants per passenger (and thus more attentive service), better airport lounges, and, perhaps most important of all, more privacy. Many first class seats on international routes sit all by themselves—no seat mates at all. But the price differences between business and first can be enormous, and for some people it’s just not worth the extra spend.

What about domestic US airlines?

But so far we’ve been discussing mostly international travel. On domestic routes within the U.S., first or business class can be a bit of a disappointment. The food isn’t anything special, the seats are in a 2-by-2 configuration but don’t always have tons of legroom (especially, I’ve noticed, on US Airways), and you still have to climb over your neighbor if you’re in a window seat. And you don’t automatically get lounge access unless you’re flying on a premium route like New York JFK to LA or San Francisco, as you might on an international flight, although you do get priority boarding, TSA lines, and check in.

So who has the very best business and first class products? On international routes, my vote goes to British Airways (especially in their new A380 planes) since all business and first long haul cabins have fully lie flat beds (in fact, BA invented the concept); Singapore (which recently announced a complete overhaul of both products, not that they actually needed a complete overhaul but what the heck); Etihad (which has aisle access and lie flat seats fleet wide and many unusual perks like an onboard chef to cater to your every culinary whim, within reason); Emirates (which, like Singapore, has very private “suites” in first class and, somewhat gimmicky, on board showers); and, on routes served by their new Boeing 777-300ER planes, with their fabulous inflight-entertainment selections and international WiFi, American Airlines (but only on those aircraft, so choose carefully). Eventually, all airlines will probably have lie-flat beds (Lufthansa is working on it, for example), but until they do I’d choose with care.

For domestic service, I love United’s newly-refurbished business class 757-200 cabins on the New York/San Francisco and LA routes (for some reason, the lie-flat seats are insanely comfortable, even if you’re not lying flat), and I’m looking forward to American’s new A321 planes on the same routes. But otherwise, I would hesitate paying cash for business or first domestically. Whenever possible, your best buy is to purchase the cheapest possible upgradeable coach fare and fork over 15,000 frequent flyer miles each way to fly up front.