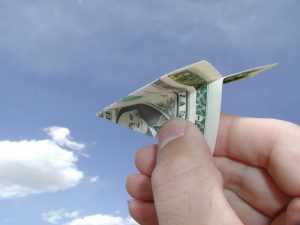 Yes, airline sites may have the best deals sometimes, but they won't allow you to compare fares and schedules on a wide variety of airlines at a glance. And sometimes you'll find the best deal flying out on one airline and back on another. Delta.com won't tell you that it's cheaper taking Delta from New York to LA combining a return on Virgin America. OTA's also have some good package deals that might be cheaper than buying airfare and hotel separately.

Watch out for promo codes

See those little promo code boxes on your favorite airline's website? What's that all about? From time to time, you'll receive promo codes in your e-mail because you signed up for e-mail from your favorite airlines and online travel agencies. These codes can only be redeemed if you book directly on the airlines' websites, another way they try to build consumer loyalty and cut out the middleman. Try doing a browser search for “airline + promo code” to find mentions of these codes online, or check right here--the Airfarewatchdog blog--where promo code deals are regularly listed.

When to use your miles

After you've found what you think is a good airfare, ask yourself if it's worth spending some frequent flier miles instead. There are smart ways to spend your miles and less smart ones. Rather than cashing in 25,000 or even 50,000 miles for a domestic economy class ticket that might have cost you $250 or $300, why not splurge for a trip to Europe (50,000 miles on some airlines) that might cost two or three times more; or upgrade your $400 economy class seat to a $2,800 business class fare for 30,000 miles on domestic routes? A general rule: if the economy class fare is $400 or more, spending 25,000 miles is a good deal. Less than that, you might be better offering paying cash and saving your miles.

If Southwest flies where you're going, you'll have to surf over to Southwest.com to see their fares. Another smaller, but growing, carrier that sells only directly to consumers is Allegiant Airlines (allegiantair.com).

Getting the best last-minute airfares

You'll often get the best fares if you book at least 7 days or more ahead of departure. But what if you don't have that luxury? Other than the airlines' last-minute weekend fares, which you can find on their sites, your best bet is Priceline.com's "Name your own price" feature or Hotwire.com.

There are many “unpublished” fares out there that you won’t find on the typical websites like Kayak. If you work for a large company, you may already be enjoying these “negotiated” rates, which are especially low on business and first class flights. But if you don’t have access to them through work, you might be able to score a heavily discounted business/first fare with travel agencies such as PlanetAmex.com.

When to use a real live travel agent

There is another way to find a low airfare, and it's one your mother probably used. Pick up the phone and call a local travel agent, the kind with a real storefront. As good as do-it-yourself online sources can be, your friendly neighborhood travel agent may have some tricks up her sleeve to save you money. Let's say, for example, that you get an airfare alert that fares from Houston to Honolulu are $800 round-trip. But who knew that the same trip, same dates from Dallas is $300. Or that you can fly from Houston to Dallas for $100 and connect onward? Travel agents also sell "consolidator" airfares, which are heavily discounted deals (mostly on international flights). These fares come with more restrictions, but can save you money. And they can also find you amazing package deals. "Bricks and mortar" travel agents often charge for their services, but the savings can be tremendous.

Getting a refund when the fare drops after you buy

Several domestic U.S. airlines will give you a full refund, in the form of a voucher good for future travel, if the airfare drops between the time you buy and time you fly—if and only if you fly on the same itinerary. Those airlines are Alaska, Jetblue and Southwest. Some other airlines issue vouchers, but deduct a ticket re-issue fee (thanks to recent fee hikes, now as much as $200 on domestic fares, or $250 or more on international ones). A good place to track price drops: Yapta.com, which works with some but not all airlines (notably missing: Southwest).

Watch out for fees

Once you've found your fare, your job isn't quite done. A low fare on one airline could turn out to be not so low once fees are added on. Airlines are making most of their profits these days not from selling you airfares but with all those fees for baggage, premium seats, and other perks. The fee for an "overweight, over-sized" checked bag to some international destinations on Delta Air Lines can cost (gulp!) $700 round-trip. One airfare website that tries to forewarn passengers about fees when they search is TripAdvisor.com/flights. Do a web search for "airline baggage fee chart" or "airline fees" to be notified of what you might pay. And don't trust airport baggage scales. Weigh your bags at home before leaving for the airport, and bring a portable digital electronic bag scale to make sure you're not being overcharged. Southwest is currently the only airline that doesn't charge for the first and second checked bags (within weight and size limits), and also doesn't charge a fee if you wish to change your travel dates.

Although a low airfare can pop up at any minute of the week, one thing's for certain: it's cheaper to fly on a Tuesday or Wednesday. Saturday is also a low-fare day. If traveling internationally, Monday to Wednesday is often the sweet spot.

Is there a "magic" hour or day to buy?

It's true that the airlines' weekend deals come out Monday to Wednesday, and some airlines announce their sales early in the week, but if you limit yourself to searching just on those days, you'll miss out. A good fare can pop up literally any moment of the week. And if you search one minute or one day and the fare is way too high, don't despair. Come back an hour or two or a day or two later and search again. Not only do airfares change with the wind, but the number of seats offered at the lowest fares changes as well, based on supply and demand.

Speaking of "when to buy," Bing.com/travel purports to offer accurate airfare predictions, indicating whether the site thinks a fare will go up or down, and it's certainly worth a try, but it's not always accurate. To see if an airfare is currently on the high or low side, do a web search for "historic airfares" to see airfare trends over time on a particular route. Two useful sites: Farereport.com and Kayak.com/trends.