Can't get on satisfaction from the airlines? Complain! (In 140 characters or less.)

Keith Pape was not in a good mood on a recent Tuesday. Who could blame him – the Los Angeles-based ad agency exec needed a fast flight out of Austin, Texas, but when he showed up at the airport early looking to fly standby on an earlier flight on American Airlines, gate agents stopped him cold.

Told that the ticket he'd purchased didn't allow him a slot on the standby list for his flight to Dallas-Fort Worth and that he'd just have to sit and wait, Parks did what many travelers do these days when finding themselves in airports or on airplanes with too much free time on their hands. He logged on to Twitter to express his frustration.

"Just told my ticket doesn't allow me to sign up standby for earlier flight," he complained to @AmericanAir. "That is stupid."

Just six minutes later, one of the staffers that manage American Airlines' busy Twitter account addressed Pape directly, explaining that most fares do not allow for free standby, but that if Pape would like to follow the airline on Twitter and direct-message his details, they'd be happy to take a look at his ticket and see what the deal was. 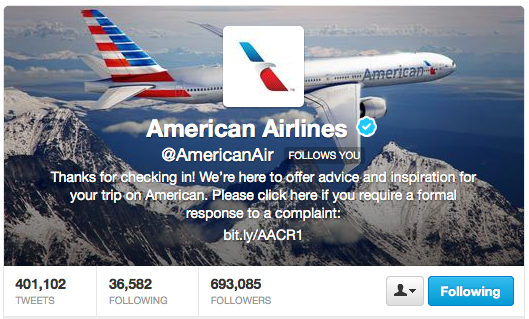 "I will," Pape replied. "But I've never been turned down for standby on any other airline…this sucks."

"We're sorry for your disappointment," the American staffer tweeted quickly, before turning their attention to his case.

Half an hour later, not only was Pape onboard an outbound flight, his tune had completely changed -- not only was he happy, he was defending the airline to his own followers, one of whom had some choice words of his own for American.

From Pape's initial complaint to "#grateful"? Barely an hour.

Pape's experience is not uncommon. Customers displeased with unhelpful airline representatives behind desks in airports, or long waits on customer service phone lines are finding Twitter a far more effective forum in which to air grievances, an accessible panic button in times of trouble, or at least serious frustration.

In the time it took you to get through to a customer service representative, you could have tweeted your question or comment. And, depending on the airline, you might have already received your answer.

More than 200 airlines now tweet, so give it a try

According to aviation industry consulting firm SimpliFlying, 213 airlines were on Twitter as of this month. With millions of followers, many of them have discovered that the faster they stop negativity in its tracks, the better.

Still, having a Twitter account isn't the same as actually using it; according to SimpliFlying's research, just 24 of the airlines generate the majority – or 80 percent – of the content, meaning that many simply just aren't competitive. According to brand social media research firm Unmetric, American's average reply time, or ART, is currently the best in the business, at less than fifteen minutes on average.

Other airlines are improving their presence as time goes on; they've perhaps learned that there is a certain risk involved in letting online reputations go unmanaged. Sometimes, there are legitimate but small issues that can spiral out of control if not checked immediately.

Take, for example, the high-profile incident in 2010 when director Kevin Smith went to war with Southwest over the airline's policies regarding customers of size. Within minutes of being booted from his flight for not fitting into one seat, an angry Smith took directly to Twitter, followed by his fans, who all-too-eagerly rallied to his side.

In this case, the airline representative assured everyone that the matter was being investigated and that it would be resolved, later following up with an explanation both of the policy and of how they handled Smith's situation. The speed with which the situation was handled was both instructive and impressive.

Next time you've got angst at the airport, or in inflight? Don't fight with the gate agent or the flight attendant, don't grumble to yourself – grab your phone or laptop and start tweeting. You might be surprised at the response (hopefully in a positive way). Here, a look at how ten North American airlines deal with their Twitter feeds.