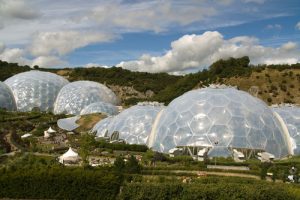 Looking for signs of spring? No need to strain those eyeballs – at these ten incredible indoor green spaces, there's always plenty of colorful flora to go around.

1. Phipps Conservatory & Botanical Gardens, Pittsburgh
Brightening up winter around these parts since the 1800s, a gigantic Victorian-style conservatory features a variety of fixed and temporary exhibits; on select Fridays this year, the beautiful Tropical Forest garden hosts Party in the Tropics, a blowout with beach-worthy cocktails and bites, along with a live DJ you can dance to (phipps.conservatory.org).

See our lowest fares to Pittsburgh.

2. Eden Project, Cornwall, England
It may be a trek to get there, but the world's largest controlled jungle, beautiful Mediterranean landscapes, all under massive geodesic domes in a former quarry, is well worth a journey. Until the King Abdullah International Gardens in Riyadh, Saudi Arabia are completed – they're still under construction – the Eden Project brags the world's largest indoor gardens (edenproject.com).

3. Gardens by the Bay, Singapore
Inside a 250-acre bayfront open space – part of the gigantic Marina Bay development just steps away from the mighty towers of Singapore's banking district – you'll find two of the world's grandest conservatories, showcasing the exotic-for-these-parts flora of mountainous and semi-arid regions. For more tropical greenery, you are of course in Singapore – that’s everywhere, including the impressively-zen Changi Airport, with its popular orchid and butterfly gardens (gardensbythebay.org.sg).

See our lowest fares to Singapore.

4. Montreal Botanical Garden, Quebec
From desert to rainforest to an acclaimed Insectarium, it's all indoors in this northern city that's short on greenery for nearly half the year (tourisme-montreal.org).

See our lowest fares to Montreal.

5. Longwood Gardens, Pennsylvania
A whopping 4.5 acres of glass-topped greenery make this 1,000-plus acre jewel near Philadelphia a year-round destination. It's hard to imagine once you're here – it's so, so big –but this was once a private estate, just another piece of the DuPont family empire, HQ'd just to the south in Wilmington, Delaware (longwoodgardens.org).

See our lowest fares to Philly.

6. Botanischer Garten, Berlin
The acres (upon acres) of outdoor garden at this important green space may be in slumber for another few weeks or so, but inside the 1.5 acres of conservatory – don't miss the bamboo forest in the giant Great Pavilion, or the impressive cactus collection – it's green as can be (bgbm.org).

7. Garfield Park Conservatory, Chicago
This 100-plus year-old oasis in a tough corner of the Windy City's west side is one of the best things most visitors to Chicago will never see; that's good and bad; good because at times, you'll have acres of tropical garden all to yourself (now there's a little thrill, particularly during a Midwest winter), bad because more people need to see – and support – this place, which needs help more than ever, after a brutal 2011 hailstorm that caused tremendous damage (garfield-conservatory.org).

See our lowest fares to Chicago O'Hare and Midway.

8. The New York Botanical Garden, New York City
Imagine Central Park, but with fewer people. And more elaborate landscaping. That pretty much sums up this green lung that beats at the heart of The Boogie Down, just a short ride on the Metro-North Railroad from Grand Central Terminal. While trails through true treasures such as the city's lone old-growth forest are beautiful at any time of year, come winter, the real action's indoors at the 110 year-old Haupt Conservatory, an ornate crystal palace that – if you can believe it – was almost torn down in the 1970s due to decay (nybg.org).

9. Yumenoshima Tropical Greenhouse Dome, Tokyo
From carnivorous plants to the unique flora of Japan's Bonin Islands – sometimes referred to as the Galapagos of the Orient – it's all about the unusual at this multi-domed attraction on Tokyo Bay. In all, expect approximately 1,000 species of plant, including a beautiful rainforest section, with waterfall and everything (yumenoshima.jp – in Japanese).

10. United States Botanic Garden, Washington DC
A beautiful conservatory built in the 1930s – designed by the same architect responsible for the nearby Capitol – is a winter highlight of this national garden, brightening up its corner of the National Mall and offering the fastest possible escape from a wet, cold DC winter (and into the tropics) you're going to find (usbg.gov).

See our lowest fares to Washington Dulles and National.