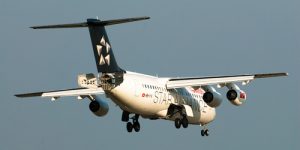 Insider tip to fast Gold Status in the Star Alliance

To make air travel more enjoyable, and even less costly, Airfarewatchdog strongly recommends attaining elite status with a single airline and its respective alliance because of the many benefits doing so can provide. Some of the most popular perks include lounge access, priority check-in and security lines, and waived checked baggage fees or increased baggage allowances.

Star Alliance, with its 27 member airlines, is arguably the best and certainly the largest of the three airline alliances (the other two are OneWorld and SkyTeam). It includes some of the world’s most respected airlines (Singapore, Lufthansa, Swiss, United, and Thai among them, although US Airways will leave the group if its merger with American Airlines happens).

While many airlines offer fast track promotions to attain elite status, such as by paying a fee to participate in a challenge (such as this US Airways offer) here’s a fast, insider track to attaining alliance-wide elite benefits.

Aegean Airlines, a Greece-based member of Star Alliance, has the easiest path to Gold status with a low threshold of 20,000 status miles (signing up on line results in 1,000 free tier miles and overall, most other programs require 50,000 miles to be flown before earning this top-tier). Be careful though because Aegean does not use the calendar year to determine mileage earning, opting instead for within a 12 month period. If you earn 10,000 miles in March, you have until the next March to make up the difference to achieve Gold. This policy seems more generous than the calendar year policy set by North American carriers.

So how does this work? First you have to sign up for the Aegean "Miles and Bonus" program. Then, when checking in for any Star Alliance-affiliated airline's flight, credit your miles to your Aegean membership number rather than the program affiliated with the airline you're flying. This means you will earn Aegean miles, which you can later redeem for Star Alliance award flights on any partner airline. For example, let's say you fly between New York and Los Angeles on United nonstop (roughly 5,000 miles round-trip) and provide your Aegean frequent flyer number at check in. After four roundtrips, you will have earned Star Alliance Gold status. Even after just one roundtrip, you will have earned Star Alliance Silver status, which on Aegean requires only 4,000 miles. That entitles you to free checked bags, which can save hundreds of dollars over a period of time.

One caveat is that when crediting miles to the Aegean program, you pass up on the complimentary elite upgrades that United and US Airways may give their own elites on their flights. And, miles earned may not always be exactly the mileage flown since Aegean awards only a percentage of mileage flown on Star Alliance partner carriers' cheapest tickets (many of United's cheapest fares only earn 50% and some of Air Canada's cheapest fares earn nothing). For more information on the exact amount of mileage earned, visit this chart.

So who should take advantage of this strategy? It's great for anyone who travels a lot internationally and wants access to lounges, priority check in and security lines, and free checked bags when on the road domestically. Or someone who does not care about first class upgrades or flies on regional jets that don’t have first class anyway. You are still earning miles with a Star Alliance program allowing you to redeem them on any Star Alliance airline although the rate may not be as fast as earning and burning with United or US Airways. Star Alliance Gold status, when earned on a foreign-based carrier such as Aegean, also offers lounge access to three North American-based airlines' lounges (Air Canada, United, and US Airways), no matter what class of service you're flying, as this article explains.

And, once you attain elite status with Aegean, the bonus miles start piling up for each flight you take in addition to the actual miles flown. Yes, it is true that you have to call Aegean's customer service line in Greece to book award trips using their miles since their website does not allow award booking for non-Aegean flights, but the miles are good for all Star Alliance partners.

Most United and US Airways fares (the two Star Alliance airlines in the U.S.) are valid for earning status miles, but there are a few low fare classes that do not qualify at the full earning level. One positive is that Aegean awards status credit retroactively for six months before your join date allowing you to capture credit for Star Alliance flights that were not connected to any frequent flyer program. Sorry, no double dipping though.