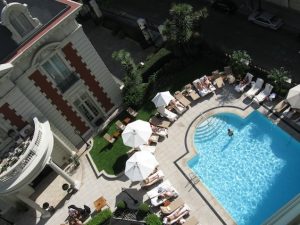 It's summer in Buenos Aires! Why go now (and what to do there)

As we here in the United States do our best to power through winter, Buenos Aires is shedding those extra layers and enjoying a long, blissfully hot summer. This year, why not put the Caribbean on ice and really head south, all the way to fun-loving Argentina? Here are a few essential must-dos for when you get off the plane.

A night at the museum

It's no secret that things get started late around here, evening-wise; it's fairly common to eat dinner after 10 p.m. You'll get used to it though; there's plenty to do in the early evenings – on Wednesdays, for instance, you can pay a late visit to the city's jewel-box Museo de Arte Latinoamericano de Buenos Aires , also known simply as MALBA. Admission is just 8 pesos – that's barely $3 – and they're open until 9pm. Before or after you tour the petite but satisfying collection, which showcases Argentinian modern masters such as Antonio Berni and Guillermo Kuitca, make sure to stop at the in-house Café des Arts, which has a beautiful patio and a full menu.

Into the wild Everyone likes to bang on about how European Buenos Aires is, and at times that can be true; then there are places like Puerto Madero, the city's redeveloped old port, which are indisputably American -- New York's South Street Seaport and Battery Park City, all rolled into one, a mix of shopping, tourist-friendly restaurants and flashy apartment buildings and office towers, incongruently located directly adjacent to the city center, with its crowded, narrow streets clinging to a tight and unexciting grid. Portside or city center-side, it can all get a little stifling, particularly in the summer time; good thing then that there's so much open space so close by. The Reserva Ecologica is nearly 1,000 acres of rather wild territory atop a major dumping ground; today, it buffers the port from the vast Rio de la Plata. Part forest, part wetlands, you can really get lost out here, which, on a sweaty summer day, might be just the thing. Rent a bike near the entrance for a few pesos an hour, or take a half-day to explore it on foot. Either way, take a camera; there are some pretty cool skyline views.

At times it feels like a kitschy tourist trap and at other times it's a serious art and antiquities fair; either way, in high season, this weekly event that crawls all the way up Calle Defensa from this historic, city center-adjacent neighborhood's colorful Plaza Dorrego counts for some of the best people watching in town. An international crowd mixes with scores of locals, bargaining over Evita memorabilia, tango CD's and mate gourds; come early, come late – the action goes all the way into the evening. The neighborhood restaurants and bars make a killing; if you're looking for a good, unhurried, meal, best to get a little bit off the beaten path to a place like local favorite Café San Juan (Av. San Juan 450) or health-conscious and friendly Origen (Peru 1092).

Hanging by the pool at the Four Seasons. You never know who you're going to bump into at the city's premier address for international celebs. (Is that Paul McCartney, over there? Probably.) Located in an out-of-the-way spot that's still a short walk from the center of town and the attractions of the exclusive Recoleta area, this is one of the sexiest pools in town, set in a garden next to the hotel's iconic Belle Epoque mansion. As summer heats up, this is the spot to retreat to. Not staying over? Gain access simply by booking a treatment in the adjacent spa; by local standards the prices are astronomical – for many Americans, they'll seem quite reasonable.

There is no such thing as good or bad ice cream in Buenos Aires – only excellent and more excellent. Seriously, there are few countries with as firm a handle on the craft as Argentina; even the mass-produced stuff from chains like Freddo that many an Argentinian will warn against is going to be miles better than the last scoop you had back home; of course, there's no better place to start than a scoop of the dulce de leche, that iconic, creamy burnt caramel / condensed milk flavor you find everywhere here. Everyone has their favorites; if we have to choose, we'll go ahead and recommend Volta, a mini-chain that – like any ice-cream joint worth its stuff around here – will deliver to your apartment or hotel. (We could get used to that.)

The concept of seasonal cuisine has yet to cross the minds of many an Argentinian diner, but pardon us if the idea of sizzling rump steaks and big plates of gluey pasta (Italian cooking is omnipresent here and generally to middling standards) don't really seem exciting on a steamy summer evening. The way people eat here, you'd think Argentina didn't boast hundreds of miles of pristine Atlantic coastline, coastline that yields some incredible seafood, such as flaky pink salmon from Patagonia, or sweet, delicate shrimp plucked from the waters of Puerto Madryn. Pining for pesce? You're best off cooking yourself – those staying in apartments can hit up the popular El Delfin fish market and see what's good; lazy types can resort to sushi, delivered all over town by a host of places that range from okay to downright awful. We're more comfortable at the likes of Puerto Cristal, a snazzy but fairly affordable Puerto Madero joint where you can order from a long list of fresh seafood, simply prepared the way you like it, with a nice salad to start. We can't promise nobody will look at you like you're crazy, but this is Buenos Aires, where there's no wrong way to do anything -- it's all about the level of confidence with which you do it (Alicia Moreau de Justo 1082).

Sit and do nothing

First impressions of Buenos Aires may lead you to the false conclusion that this is a fast-paced city on the move. This town does put on a great show of going about its business, but all that charging down sidewalks and speeding down the avenidas is more reflex than necessity. At heart, this is a city that likes to kick back and have a good time; if you're here on vacation, don't get sucked into the drama – just stake out a ringside seat and watch it all go down. Start your day in the happening Palermo Hollywood neighborhood, with breakfast at the cuter-than-a-button Oui Oui, a French-ish bakery/café located in a quiet mid-block location and filled with good-looking young patrons (Nicaragua 6068). Once you can't take another croissant or latte, pick up and move along to the northern end of the Palermo area and grab a spot at the local branch of the nifty Tea Connection mini-chain, a zen oasis of world-class teas and speedy free wireless internet (Cervino 3550). Later, stroll through the green parks in the popular Palermo park system, past the beautiful Bellas Artes and Decorative Arts museums – the latter has a great café, Croque Madame, good for – you guessed it – killing another hour or two, or maybe having a bit of lunch (Libertador 1902). Later, head on into Recoleta; if it's happy hour, claim a chair in the sexy second-floor bar at Milion, a restaurant and nightspot carved out of one of the neighborhood's lavish former private homes. Order up a proper aperitif – a negroni, for instance. Drink, repeat (Parana 1048).

Get out on the water

You've probably heard that saying, "it's not the heat, it's the humidity." That pretty much sums up any day in Buenos Aires – even in the dead of winter, we've stood in poorly ventilated subway cars sweating buckets; the air is often like a heavy, wet blanket. (It's not pretty.) While there are some blissfully beautiful summer days where the humidity burns off and it almost feels like you're in the desert, things get so dry, this isn't the norm; not by a long shot. For those unbearable summer days, there's Buquebus; this popular ferry service connects the city's waterfront with Uruguay, out across the Rio de la Plata, which is either the widest river in the world or a gulf of the Atlantic Ocean, depending on whom you ask. Either way, you're out there and you're gulping down huge helpings of fresh air, either on the 1 hour ride to the colonial city of Colonia del Sacramento – a UNESCO World Heritage Site – or the 3 hour journey to the Uruguayan capital of Montevideo, a pleasant, low-key town that's easily explored on your own. If you've got the time, ask about connections to Punta del Este (4-5 hours including a bus ride), the famous beach resort that draws well-heeled South Americans each summer that's a lot like Miami's southern cousin, but with even more Spanish spoken.

For the lowest available fares, visit our Buenos Aires page.