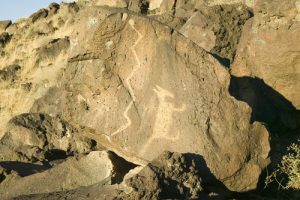 The historic city of Santa Fe and the artist – and ski bum – haven of Taos get all the love when New Mexico is mentioned. But Albuquerque? Until the hit TV show “Breaking Bad” came along, I’m guessing most travelers didn’t even give the state’s largest city a second thought, and those who did were just trying to figure out how to get from the airport to some place else. Too bad they didn’t know: Albuquerque is one of the West’s most unique cities, a relaxed but quietly interesting town that deserves a lot more attention. If you haven’t visited lately, or ever, please do stop by. Here’s what I like best about this city on Route 66.

Multi-cultural before it was hip

There are precious few places in the United States that remain almost completely true to their heritage; New Orleans is a famous example, but New Mexico’s up there, too. Albuquerque is of those cities where you show up and are like, what is everyone doing here? Answer: Same thing they have been for centuries – being New Mexicans. Officially founded in 1706, Albuquerque is the newbie around these parts. Matter-of-factly multicultural, the city got its start in what’s now known (appropriately) as Old Town; at the neighborhood’s center stands the church of San Felipe de Neri. Join the faithful at morning mass – at 7:00 a.m., every day except Thursdays and Saturdays – and soak up the seriously old school vibe. You don’t have to be Catholic to be impressed.

The pilgrims? Brash young upstarts. When the Brits washed ashore at Plymouth Rock, what we now know as New Mexico was already quite the happening spot, what with its many active pueblos; the Spaniards were all over the place, too. Go back in time at the Petroglyph National Monument; just a short hop west of the Rio Grande, hiking trails show off the more than 20,000 carved images that date back to 700 years ago. Back in town, the Indian Pueblo Cultural Center offers an immersive experience in the region’s rich heritage – the on-site café is a great place for people who prefer to do their learning about cultures by eating (indianpueblo.com). No visit to the city is complete without a stop in downtown-adjacent Barelas, one of the city’s oldest barrios; check out the art galleries, catch a play or a concert at the National Hispanic Cultural Center. While here, make sure to drop in on the Barelas Coffee House, a neighborhood institution famous for their menudo; it’s a firm favorite with the local power crowd (1502 4th St. SW).

In a city where families stay for generations, things don’t change all that quickly. But every once in awhile, surprises pop up – on a once-grim stretch of Central Avenue in what’s known as the EDo, or East Downtown neighborhood, everything’s kind of nifty these days – sip a Martinez at the Apothecary Lounge inside the handsome Parq Central hotel, or stop by the Grove Café & Market for a croque madame breakfast sandwich (600 Central Ave. SE) and soak it all in. A few blocks west, in Downtown proper, one of Conrad Hilton’s first properties, a handsome thing built in the 1930s, is now the very pleasant Hotel Andaluz. On Gold Street, grab a civilized espresso – extracted from the sleek Faema machine – at Café Giuseppe (222 Gold St. NW); in season, hit the Grower’s Market in Robinson Park. It’s not like the city’s going to be the next San Francisco tomorrow, but in a way, this is nicer.

Red and green and delicious

New Mexico food isn’t like other food – it’s often better. Where best to try it? Everywhere. Green chile stew, red chile stew, hearty bowls of posole on a cold winter day. Blue corn enchiladas are good, as is carne adovada – that’s pork and red chile stew, by the way, and it’s what everybody eats. For dessert, it’s biscochitos, or buttery cookies zipped up anise and cinnamon. And, of course, puffy, fried sopapillas. Drizzled with honey. Unless you eat them for dinner, too, stuffed with beans and cheese, meat, chile – you name it. Snack time? Roasted and lightly salted pinon nuts, best purchased from a guy on the side of the road. And don’t forget the omnipresent green chile cheeseburger, perhaps the most accessible of New Mexican staples. Where to eat? Why not start at Cervantes, a cozy, vintage cocktail lounge blast from the past on an out of the way block near the airport; it’s a local favorite and it is very good -- spicy red chile, carne adovada dinners, hot sopapillas, the works (5801 Gibson Blvd. SE). Speaking of classic, a little closer to downtown, there’s Mary’s & Tito’s, an old-school spot for many of the same dishes (2711 4th St. NW); down in the ye olde barrio of Barelas, stop in for stuffed sopapillas and tamales at El Modelo (1715 2nd St. SW). There’s more – there’s always more – just ask any local for their favorites. And be prepared to take notes.

Breaking Bad is so very good

If you’ve seen “Breaking Bad” then you already know that the city of Albuquerque is one of the show’s main characters. And if you’ve already visited, you already know just how visually correct it all is, from the leafy Huning Castle neighborhood (where Aaron Paul’s character, Jesse Pinkman lives) to the dated, underutilized strip malls where you half expect to find Bob Odenkirk’s character, sleazy lawyer Saul Goodman, emerging from his office. And all that sky – absolutely endless blue sky. The guys at the ABQ Trolley Co. have been leading popular tours of some of the more prominent show locations; they expect to start back up in the spring. For more information, visit abqtrolley.com.

The Rio Grande is truly grand

One of the country’s most historically important rivers is a focal point of outdoor-loving city residents, who find any excuse to head down to the 16-mile Paseo del Bosque biking and hiking trail, winding its way through stands of cottonwood trees clustered on the river’s edge. Down here, you’ll also find the impressive Rio Grande Botanic Garden at the ABQ BioPark, showing off just how much flora can actually thrive in the desert. For a true escape from the city without going more than a few miles from downtown, stop in at Los Poblanos, a riverside organic farm with a quaint inn that’s well-known and appreciated locally for its food; sign up for a cooking class or check for nights when they’re open to the public for dinner.

Albuquerque’s already pretty up there, with a base elevation of about 5,000 feet – that’s just a couple hundred below Denver, come to think of it. But why not go higher? Get up to more than 10,000 feet in just a few minutes with a ride on the Sandia Peak Tram, where you can go for an incredible – and not too difficult – three-mile loop hike along the ridge; in winter try your hand at a little skiing or snowboarding.

One of the most colorful surviving stretches of the fabled historic highway happens to be one of Albuquerque’s main drags, Central Avenue. If you’re hanging around town for more than an hour or two, you’ll likely find yourself on Central without even trying. From college-cool Nob Hill, up near the University of New Mexico campus, to the decidedly untamed stretch at the western gateway to town, there’s great neon (and great photo ops) in abundance. End to end, you’ll be amazed at how much room the city still has in its heart for a stunning number of seedy motels and other mid-century fossils.

An emerging beer lover’s destination. And plenty of it, too – the city has a growing number of microbreweries to choose from. Start, however, at La Cumbre; their buoyant, bright Elevated IPA and rich Malpais Stout have won some major awards. Their brewpub – tucked away in a industrial park north of the university – is open every day at noon (3313 Girard NE). Also check up on the new-ish (and still finding its feet) Broken Bottle Brewery over on the west side. They’re gaining a reputation for experimenting with location-appropriate herbs and spices, such as rosemary and red chile (9421 Coors Blvd. NW).

And it’s all easier to get to. Recent news of JetBlue’s new daily service from New York (JFK) to Albuquerque’s easy-to-use airport means New Mexico will soon be that much closer to millions of northeast travelers. The flight – the first nonstop from the New York area since 2008 – takes off April 22 (cabq.gov/airport). For a list of airfares to ABQ, visit here.