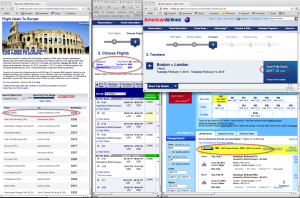 It’s been nearly nine months since the Department of Transportation (DOT) announced that airlines and travel agents, including online travel agencies, would be required to advertise and display airfares with all mandatory taxes and fees included. After a few extensions, that rule will finally go into effect. On January 26, 2012 all airfares must be shown with taxes and fees included. That means the price we report for domestic flights will appear to have suddenly gone up by $20 to $40. Here's the background.

On international flights, this is a big win for consumers, because international taxes can sometimes be more than the base fare and this can be quite the sticker shock when the final price is displayed.

As you can see in the example below, flights from Boston to London are being advertised on American’s main page at $250 each way.  On the next few pages, you see a fare of $41 from BOS to LHR and $458 returning from LHR to BOS for a total round-trip fare of $499.  However, on the final page, your total trip cost after the taxes are added is $697, which is almost $200 higher than what is initially shown.  You'll also see on Orbitz the difference is even greater, with the screen showing an $81 round-trip airfare in bold print with $616 in taxes and fees making up the rest of the actual $697 total price.

This is why we at Airfarewatchdog have always displayed international fares with taxes included.  For domestic flights, these mandatory taxes and fees usually add up to about $21 round-trip for nonstop flights and typically range within a few dollars of $40 for connecting flights (depending on which airport you are connecting through).  For flights that have a stop, but keep the same flight number and don't change planes, taxes tend to be around $30 round-trip. Since we currently post most of our domestic fares as just the base fare, we want to give you a heads up that although fares will appear to go up $20 to $40 later this month, they will now include taxes and fees.

For example, below are two Airfarewatchdog-verified fares for nonstop flights from Detroit to Chicago-Midway.  These fares are both the same price, with the Southwest fare showing $98 RT pre-tax and the Delta fare showing $119 RT including taxes.  We found the Delta fare on Orbitz, which shows tax-included fares on its flexible search, and the Southwest fare on Southwest.com, which shows only the base fare initially. So, even though it looks like the Southwest flight is cheaper, remember that after taxes they are the exact same price. Another example on a connecting flight from Minneapolis to Ontario shows the Southwest fare at $268 RT pre-tax and the United fare at $309 including taxes.  Once again, these are basically the same price in the end, with Southwest.com giving us the base fare initially and Orbitz giving us the tax-included fare initially.  Also, please note that the outbound flight on Southwest has no plane change, which results in a lower tax total, and on Orbitz the taxes differ slightly depending on the airline due to different connecting cities.  Starting Jan. 26, 2012, all sites will be including taxes for all fares. So, why haven’t we done this all along?  Based on the way airlines release fares, our methodology includes searching over a 330-day travel period to find the lowest fare we could recommend on a specific route. Our searches typically brought back only base fares. As long as the airlines listed fares the same way, we were able to give an apples-to-apples comparison on the base price. At the same time, we provided as much guidance as possible on what to expect for additional taxes and fees.  In an effort to search as many routes as possible and include all airlines selling a particular fare, we opted for displaying the base fare only for domestic airfares.  It would be significantly more time consuming, and reduce the number of fares we could find and share, to find the taxes for each airfare on each airline since the taxes would differ slightly between airlines depending on connecting airport and how many connections.  Though the displayed fares may appear to be higher, the upside to the new rule is you will know right away exactly what you’ll be paying for your flight.

As for baggage fees, that’s a different story.  Since checking baggage is not technically required for air transportation, the rule doesn’t require baggage fees to be included in the advertised airfare.  However, there will also be a new requirement for airlines and travel agencies to display the specific baggage fees for all potential classifications in the confirmation email after booking.  This means that they can’t just give a range of fees, but must include the specific fee for the customer purchasing the ticket or a list of every possible baggage fee that could pertain to the customer (online purchase, at airport, elite status, etc.).  This info can be displayed with a hyperlink directly to a specific location on the airline website listing all baggage fees.  Most airlines have already provided such pages listing optional fees and we’ve compiled all the links for you here.  Of course, finding out the baggage fees after your purchase may make you decide you don’t want to purchase that ticket anymore.  Along with these new regulations, there will be a 24-hour grace period for all airline ticket purchases so you can cancel your reservation and get your money back within 24-hours of purchasing.

We will continue to pass along the best fares we find and link you to where we find that price.  With the new rule beginning January 26, all sites should be initially advertising all their fares including taxes and that will be the price that we pass along to you.